Why You Can’t Trust Shaun Alexander 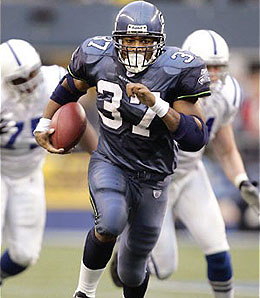 If you’re looking at Shaun Alexander as a top three back for 2007, you’re setting yourself up for a big disappointment.

Do you know the Schwab? No, no, no. Not Charles Schwab but Howie Schwab of Stump the Schwab fame. The Schwab, who recently appeared on a program for the worldwide leader in sports coverage, was asked about his top three running backs for fantasy football. He said LaDainian Tomlinson, Steven Jackson and…Shaun Alexander.

I like the Schwab. He’s a very knowledgeable guy. However, here’s where I draw the line. The days of Shaun Alexander being a top five fantasy back are over.

In 2005, Alexander stamped the NFL record book with 28 total touchdowns to go along with 1,880 yards rushing, which ultimately helped the Seattle Seahawks reach the first Super Bowl in team history. The following season, wear and tear along with the loss of all-world guard Steve Hutchinson, slowed Alexander.

After a bruising 370-carry regular season followed by an up and down post-season run, Alexander struggled through the first three games in 2006. Then, the Madden 2007 coverboy suffered a broken foot which kept him on the shelf for six games. While Alexander came back and slightly salvaged what could have been a promising season (he averaged just 3.6 yards per rush, which is amazing considering he managed to have a 200-yard effort against the Packers), history says his best days are behind him.

Alexander enters 2007 at age 29 with a healed foot and goals to eradicate the concept of backs being washed up as they hit 30. As all great running backs find out, Father Time is the greatest run stopper of all-time. The playoff games and constant body abuse will continue to take its toll on Alexander in 2007.

It’s a simple and clear concept. Alexander, who will turn 30 on October 30, cannot survive carrying the football between 350 and 370 times this season. In fact, if you prorate his 2006 carry total of 252 attempts over a 16-game season, he would have compiled 403 rushes. That’s not a recipe to preserve your star back.

In the week after Alexander came back from a six-game injury hiatus, he returned to play Green Bay in snowy Seattle on Monday Night Football. How did head coach Mike Holmgren reward him? He gave Alexander 40 attempts on a recovering broken foot in one of the most insane cases of running back overusage in league history.

Everyone is worried about Larry Johnson and Herm Edwards’ complete lack of regard for his safety. Yet, Alexander has been abused just as much over the past three seasons. As a result, I see one of two things occurring with Alexander the Great. He’ll end up splitting carries with back-up Maurice Morris or continuous mismanagement will lead to his demise a lot quicker than expected.

At best, Alexander can be a respectable number two back for your fantasy backfield due to Seattle’s cream puff schedule. If fantasy owners take him in the first round, they could be in for a long road to the all-important Week 16 league championship game. By the way, as an added negative, Alexander plays Baltimore in Week 16. Have fun with that.

Sorry Schwab, you may know who won the 1948 British Open and other fascinating facts, but you’re way off if you think Alexander can be a top three back this season.