Posts Tagged ‘Back to the Future Episode 1: It’s About Time’

Video Game Review: Back To The Future, Episode 1 — It’s About Time 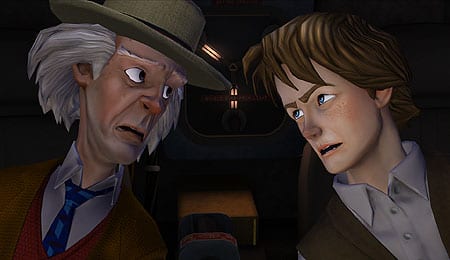 They may look a little more cartoony, but there’s no doubt that Marty McFly and Doc Brown are back.

Back To The Future needs no introduction, does it? Even for the generation that grew up after the movies came out, it’s still a beloved film franchise thanks its sublime combination of sci-fi storytelling, endearing characters, sharp writing, and great performances. Now adventure-game leader Tell Tale is trying to bring the series back… to the — oh, heck, I don’t need to make any bad puns, do I? Let’s get to the review.

Of all of the Tell Tale adventure games to come out over the past year or two, there are some big names with quite a legacy: Sam & Max, Monkey Island, and of course, Back To The Future. So it’s somewhat strange that the Tell Tale game with the crispest, most refined control scheme is Strong Bad’s Cool Game For Attractive People. Back To The Future has the same issues as Sam & Max and Monkey Island — namely, movement controls are a little sluggish and objects are sometimes difficult to move around.

However, Back To The Future struggles even more than those other games due to a buggy camera system. As you move Marty around Hill Valley, there are bigger, more open sections that allow him to jog. Unfortunately, the camera doesn’t pan to follow him much; instead, it switches to a different camera angle, but Marty’s directional axis gets tweaked so he winds up going the wrong way. This is frustrating, especially when you’re trying to follow someone or something.

The rest of the controls are par for the Tell Tale course, though there are a few additions to streamline the process of solving puzzles. Yes, you have your standard inventory and interact buttons, but Tell Tale has also included a hint button and a goal button; the hint button brings up a screen with four levels of hints to solve a certain puzzle, giving you more detail each time. If you need a gentle nudge in the right direction, you’ll get that without spoiling the puzzle — and on the flip side, if you just want to get the hell past a puzzle, you can do that too. The goal button is perfect for people returning to the game after a few days away, as it simply tells you what your current objective is. As a veteran adventure gamer with a busy schedule, this little bit of advice is much appreciated.

If you’re a fan of the Back To The Future films (and really, who isn’t?), then you’re going to have a big grin on your face as you play Tell Tale’s version. While the graphics aren’t system-busters, they’re what you expect from a multi-platform adventure game, which basically means that they’re PS2/XBox-level graphics on an HD output. All of the characters from the films have been reinvented into a cartoon-like version of themselves, and for the purposes of gaming, it works just fine.

The sound is what always shines in Tell Tale productions and Back To The Future is no different thanks to the fantastic voice work headlined by the returning Christopher Lloyd and A.J. LoCascio, who does the best Michael J. Fox impersonation you’ve ever heard. The musical score is also straight from the films, taking its cues and themes from the movies while not really contributing much notable original work.

It’s all about the acting, though, and the strong voice work easily brings you back to the world of time-traveling DeLoreans and Huey Lewis anthems.

Let’s get one thing clear right off the bat: this Back To The Future game is infinitely better than the original NES game based on the first film. Is it Tell Tale’s best effort? No, but it’s not bad, at least for the first episode.

It’s About Time rides high off nostalgia, from in-jokes to familiar themes and nods around the world. Unfortunately, a lot of the game is dressed up too much in this, and while it does create a smile, it also feels like window dressing to help make a good, not great, game more marketable. There’s no doubt that Tell Tale put in a lot of time and effort in creating a story and world that fits in with the film series. Unfortunately, the actual game part of it is a little too streamlined. Puzzles seem to flip flop from the overly easy to the that’s-a-little-out-there leaps of logic; some puzzles are simply solved by talking to the same person a few times rather than actually doing something.

The high production qualities and endearing writing make this a little more forgivable, but the core of an adventure game is puzzle solving, and it seems to be secondary to the (well-done) use of the movie license.

Back To The Future: It’s About Time is just the first episode in the series, which means that its technical issues and gameplay flaws may yet be smoothed out. As it stands, it’s a worthy addition to the franchise, and certainly could have been much worse. But as games go, it feels a little safe, like it’s catering too much to the mainstream audience that might pick it up because of the name.

Consider this on par with Back To The Future Part 3: enjoyable, but not nearly as good as it could have been. Of course, that’s the thing when you mess with time (and episodic releases) — there’s always more time to do better.

Now, excuse me as I pump up my Huey Lewis cassette.