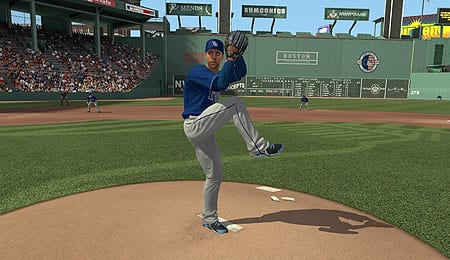 The Price is wrong, Bob.

A year ago many speculated that 2kSports would be pulling the plug on its MLB series after its third-party exclusivity rights ended in 2012. The franchise was granted a reprieve, however, as MLB 2k13 hit store shelves this month. It’s still the only game in town for Xbox 360 owners, but just how different is it from its predecessor? In a word: scarcely.

As far as I can tell there have been no changes to the controls. Pitching remains the highlight here while the basic approach at the plate makes for a casual interface that offers newcomers the chance to step in and excel from the start. Everything handles well with my main complaint being the way baserunning commands tend to queue up, which makes last-second decisions (such as whether or not to try to stretch a double into a triple) into lumbering actions that offer the defense a chance to catch you off base when they really shouldn’t. Also, slide animations don’t always match what you wanted.

Not only has MLB 2k13 not progressed visually, I could make the case that it has actually regressed with a number of animations that range from glitchy to infuriating. The former, like watching an outfielder’s arms and legs go through the wall, can be overlooked. The latter, on the other hand, really undermine the game’s authenticity. Things like balls bouncing in foul ground and even being called foul by the ump only to be fielded for outs against you. Or how about balls hitting off the wall and going into a fielder’s glove for an out. These aren’t just graphical miscues, they’re essentially cheats.

In what will be a running theme throughout this review, character models appear to be identical to last year so if your favourite player is sporting a new look don’t expect it to be reflected here. And speaking of running, the unnatural animations on the base paths have returned as well — what makes the whole thing doubly bizarre is that the weird gallop doesn’t appear when running as a fielder.

Commentary has at least seen some new lines of dialogue, most of which pertain directly to events during the 2012 season such as team or individual performance. There are definitely some breaks in logic and repetition (especially when in My Player mode), but it’s still better than The Show.

Everything in this year’s version was seen in MLB 2k12. In fact, the online leagues available last year have gone by the wayside, leaving MLB 2k13 as the rare sports title to actually feature less content than the previous version. That makes for a tricky bit of reviewing as the core game of baseball that 2k13 offers is every bit as good in some areas (and shaky in others) as last year, which of course also means that no tangible progress has been made.

My Player returns as the career mode, allowing you to guide your created player from his humble beginnings in Double-A all the way to the Hall of Fame. Games are relatively quick and progression is as well assuming you’re performing at a moderate-to-high level. The A.I. actually seems a little better this time around from the managerial side as more moves make sense — summoning a southpaw from the pen to combat a left-handed hitter, pinch running in a critical late-game situation — but unfortunately the on-the-field A.I. is as bad as ever.

In actual baseball, putting two men on with nobody out constitutes a rally. In MLB 2k13 it’s akin to a death sentence. You’ll watch helplessly as your teammates flail away, failing to even make contact against the opposing hurler. During my time with the game I found myself on second or third with no outs literally dozens of times and more often than not all three hitters that followed me struck out — frequently on nine pitches. How bad did it get? There were times when I’d intentionally get myself picked off just so I didn’t have to waste any more time waiting for the inevitable strikeouts.

Earning skill points still suffers from the same issues it always has. Namely, that the all-or-nothing goals are almost completely arbitrary to the situation. Why am I being asked to get ahead in the count when the tying run is at third in the eighth inning? Why should I be swinging for the fences with no one on base down three runs? Nine times out of 10 the game eschews the fundamentals of baseball, leaving you with the option of playing to earn the skill bonus or playing for realism.

Even with all its warts, My Player can still be addictive. Progression is constant, goals are clearly spelled out and the games themselves don’t require much of a time commitment from one to the next. You want to make the All-Star Game. You want to help your team win games. You want to come through with that big hit in the clutch. It’s just unfortunate that your teammates’ collective offensive impotence makes it feel like a one-man endeavour far too often.

Franchise mode is unchanged, meaning it remains decent but limited. You can still outfox the computer in trades and simulated numbers trend toward pitching, though I didn’t run into any absurd anomalies in either individual statistics or team performance. Online is fairly responsive (one of the areas the series is consistently superior to The Show) and I generally had no trouble connecting to a game.

Is MLB 2k13 a bad game? No. In spite of some flaws the baseball itself is easy to control and generally fun to play. That being said, you can’t simply overlook the fact that 2k13 is a glorified roster update of 2k12 in every sense. If you still own last year’s game there’s no good reason to invest US$60 unless you absolutely cannot abide seeing the Houston Astros in the National League.

Crave more in-depth Fantasy analysis? Then join us every Thursday at 9 p.m. EST for RotoRob’s Fantasy Baseball Weekly Podcast on Blogtalkradio. Tim McLeod and I will entertain and edify you for a half hour or more each week. We’re off this week for March Madness, but will return on April 4. Tune in here.