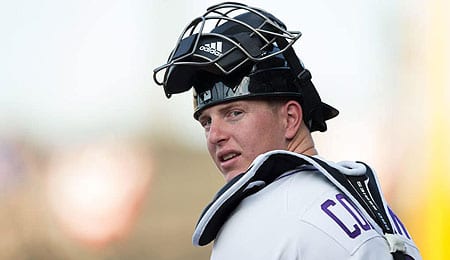 Today, we’ll examine the North Division roster, and follow that up shortly with the South Division roster. Obviously, there were several instances of players selected that had to be replaced; we’re focusing on the final roster.

Zack Collins, C, Chicago White Sox: Collins has improved his contact rate this year, but his slugging percentage has dipped a tad. Still, he’s been racking up a decent amount of extra-base knocks and flashed his pop by winning the Home Run Derby (see his reaction to doing so in video below).

Seby Zavala, C, Chicago White Sox: Much like he did when he first turned pro, Zavala has been hitting the ball to the opposite field more this season. Despite the highest strikeout rate of his career, he was promoted to Triple-A on Thursday. Zavala was 1-for-2 in the All-Star Game.

Rudy Flores, 1B, Arizona Diamondbacks: Flores is doing a better job of working the count this season. He’s seeing lots of PT and has responded with plenty of extra-base hits, earning a spot in the Home Run Derby.

Kevin Medrano, 2B, Arizona Diamondbacks: Medrano has seen time at first, second and third base as well as the outfield this year. He’s played a flawless second base so far, with more putouts. At the plate, Medrano has been raking, ranking second in the league in hits.

Jason Vosler, 3B, Chicago Cubs: The Cubs’ 16th round pick in 2014, Vosler has upped his walk rate in his third season at Double-A.

Danny Mendick, SS, Chicago White Sox: A 22nd round pick by the Pale Hose in 2015, Mendick is hitting much better in his second crack at the level. He continued to show that by going 2-for-4 in the All-Star Game.

Ryan Boldt, OF, Tampa Bay Rays: A 2016 second round pick, Boldt has adjusted to Double-A seamlessly, racking up the runs with a solid BA.

Galli Cribbs, OF, Arizona Diamondbacks: Cribbs is seeing plenty of action in his first full season of Double-A. Considering he was signed as an undrafted free agent, his ascension to Double-A All-Star is impressive. Cribbs has wheels, but struggles to make contact.

Eloy Jimenez, OF, Chicago White Sox: The Pale Hose’s top prospect has the team’s fan base growing impatient waiting to see him in the bigs. After finally proving he was healthy at Double-A and getting enough at-bats in, he was promoted to Triple-A on Thursday. Before getting the call, Jimenez went 1-for-3 in the All-Star Game.

Nathan Lukes, OF, Tampa Bay Rays: Cleveland’s seventh round pick in 2015, Lukes was traded to the Rays at the beginning of August 2016 in the Brandon Guyer deal. Lukes is hitting much better in his second crack at Double-A.

Jamie Westbrook, OF, Arizona Diamondbacks: This left fielder is in the top 15 in the league in slugging percentage, earning his first mid-season All-Star nod as a professional. Westbrook’s extra-base sock has been far more impressive this season, earning him a spot in the Home Run Derby.

Brett Sullivan, DH, Tampa Bay Rays: Tampa Bay’s 17th round pick in 2015, Sullivan had a strong pro debut in the Appalachian League, but he struggled in his first taste of Double-A last year. This season, he’s lowered his strikeout rate en route to a much better showing.

Nick Solak, IF, Tampa Bay Rays: Originally a second round pick of the Yankees in 2016, Solak landed in Tampa Bay in a three-team deal last offseason. He’s hitting better in his second crack at Double-A and really racking up the total bases (third in the league).

Omar Bencomo, P, Minnesota Twins: Minor league veteran Bencomo has already matched his Double-A high in wins this season while logging a goodly amount of innings in a swingman role. He also made one start at Triple-A this year.

Craig Brooks, P, Chicago Cubs: A seventh round pick in 2015, Brooks has racked up a few saves, taking over as closer after Dakota Mekkes was promoted to Triple-A. Brooks’ ERA is vastly improved in his second stint at Double-A.

Genesis Cabrera, P, Tampa Bay Rays: Tampa Bay’s No. 21 prospect heading into the season, Cabrera has proven he can win at Double-A the last couple of years, and he’s missing far more bats this time around.

Justin Donatella, P, Arizona Diamondbacks: Donatella, taken in 15th round in 2015, has improved his ERA with the jump to Double-A this year. He’s also proven tougher to hit.

Dane Dunning, P, Chicago White Sox: Dunning caught our attention at the end of April shortly after being promoted to Double-A. He’s handled the jump nicely, racking up plenty of wins while gaining solid high-level experience. Washington’s 2016 first rounder (traded to Chicago in the Adam Eaton deal) is going places.

Ian Hamilton, P, Chicago White Sox: Chicago’s 11th round pick in 2016 out of Washington State, the righty is seeing more action in his second crack at Double-A, and he’s dramatically improved his hit rate.

Ryne Harper, P, Minnesota Twins: Another minor league veteran, Harper was originally a 37th round pick by Atlanta in 2011 (1,136th overall), but he finds himself back at Double-A after struggling at Triple-A earlier this season. He’s a perfect 5-for-5 in saves at Double-A, and has much harder to hit than he was at Triple-A.

Thomas Hatch, P, Chicago Cubs: A third round pick in 2016, Hatch has already won as many games at Double-A this year as he did at High-A last year. He’s been a bit more wild this year, but tossed a hitless frame in the All-Star Game.

Williams Ramirez, P, Minnesota Twins: This reliever’s hit rates are way up with the move to Double-A, and his control has been an issue. We’re not sure how he earned this honour, but the day after the game, he landed on the DL with a hamstring strain.

Jose Ruiz, P, Chicago White Sox: Ruiz is undefeated out of the pen this year at both High-A and Double, posting a fine ERA at Double-A. The top international signee by the Padres in 2011 (when he was a catcher), he made his MLB debut last year with one appearance for San Diego.

Todd Van Steensel, P, Minnesota Twins: This veteran has been kicking around the minors since 2009, spending the last three years at Double-A. Van Steensel has already matched his career high in wins, although his ERA isn’t quite as spectacular as it was last season. His K rate is up to 10/9 this season.

Taylor Widener, P, Arizona Diamondbacks: Widener was moved from the Yanks to Arizona in the same deal as Solak. Widener has progressively become more of a flyball pitcher as he’s moved up the ladder, and if he remains healthy, he’s on pace to face more batters this season than ever before.

Curtis Mayfield is one of our musical heroes, so naturally, we’re big fans of his original group, The Impressions. Here’s their 1967 soul classic, “We’re a Winner.” It was produced by the legendary Johnny Pate.

Now it’s your turn. Let us know in the comments below who your favourite Southern League prospect is.