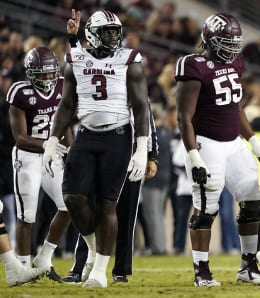 The 2020 RotoRob NFL Draft Kit continues today as we near the end of our rankings with another cheat sheet. So, while the debate over the name of Washington’s football team rages yet again, let’s review the top 20 Fantasy team defenses and special teams.

The old Ricky Bobby slogan, “if you ain’t first, you’re last” fits well when drafting D/ST. Leading defenses have been an amalgam of successful QB pressure and luck. Takeaways such as safeties and picks, plus defensive and special team touchdowns are notoriously hard to predict and have little correlation year-over-year. QB pressure rate (sacks, hurries and knockdowns) can provide a better picture on which team is scheming and creating openings for their players.

We strongly urge you to never draft a defense early, but instead invest the capital used on Pittsburgh (for instance) to draft players with comparable ADPs like Derrius Guice or Michael Gallup. This year, we at RotoRob.com love Baltimore’s D (though we would never draft them) as well as Denver, Tampa Bay, Philadelphia and Washington at their respective ADPs.

2. Pittsburgh Steelers: DC John Keith Butler‘s unit — since trading for Minkah Fitzpatrick — has looked like the Steel Curtain of old despite staying on the field an average of 31:12 minutes per game (26th highest in the league). Boasting the highest pressure rate in the NFL last season (30.5 per cent), the Steelers translated their ability to disrupt the quarterback into 56 sacks (9.51 per cent sack rate) as well as forcing 20 interceptions (second in the league). Pittsburgh returns all defensive players but NT Javon Hargraves.

3. New England Patriots: Under HC Bill Belichek‘s first year moonlighting as the defensive coordinator, New England finished with a pressure rate of 24.1 per cent (10th in the NFL), despite blitzing 37.1 per cent (sixt in the league), and converting it into an unworldly 47 sacks (8 per cent sack rate). More impressively, the Patriots led the league in interceptions (25) thanks to increased usage of Belichek’s Cover 0. Regression is likely, but you won’t catch us betting against Belichek.

6. Tampa Bay Buccaneers: Tampa Bay’s defense remains relatively unchanged, short of depth transactions and signing OLB Jason Pierre-Paul. Last year, the Bucs had the 10th-ranked defense, generating 23.9 per cent pressure rate (11th in the league), converting it into 47 sacks (6.61 per cent sack rate; 17th in the league) and 12 interceptions (19th in the league). Tampa Bay somehow boasted the league’s best run defense despite “greatest QB ever after lasik surgery” Jameis Winston, who was a turnover machine. We believe this could be the most undervalued defense in Fantasy this year.

8. Buffalo Bills: Off the field issues plague the Bills’ defense as NT Ed Oliver is facing punishment for driving under the influence and possessing a fireman. Regardless, Buffalo added DE Mario Addison, WLB A.J. Klein and RCB Josh Norman to a defense that generated 23.3 per cent pressure rate (17th in the league). The defense racked up 44 sacks, 8.1 per cent sack rate (sixth in the league) and 14 interceptions (11th in the league). The Bills’ D is not dissimilar to Minnesota HC Mike Zimmer‘s defense in that it specializes in third downs, run-stopping and goal-line rather than takeaways.

9. Kansas City Chiefs: The Super Bowl champions return all defensive starters except CB Kendall Fuller and MLB Reggie Ragland. It is likely HC Andy Reid pulls SS Tyrann Mathieu into box in Cover 1-3 defense. Kansas City’s depth chart is signalling a 4-2 defense with two outside corners and a nickel. A true bend-don’t-break defense, the Chiefs snagged 16 interceptions (fifth in the league) and 45 sacks (7.19 per cent sack rate, 12th in the league) on 22.2 per cent pressure rate (11th in the league) despite allowing the 16th-most yards last season.

10. Los Angeles Chargers: The addition of NT Linval Joseph to DE Joey Bosa and DE/OB Melvin Ingram as well as CB Chris Harris to SS Derwin James and CB Casey Hayward gives the Chargers potentially one of the league’s most lethal defenses. Generating a 23.8 per cent pressure rate (13th in the league) last year, Los Angeles produced 31 sacks (6.1 per cent sack rate, 23rd in the league) and 11 interceptions (24th in the league). Boom or Bust.

12. Chicago Bears: Under DC Chuck Pagano, the Bears’ D produced a serviceable season, generating 25.2 per cent pressure rate (eighth in the league) while compiling 45 sacks (5.3 per cent sack rate, 28th in the league) and 10 interceptions (28th in the league). Chicago was the ultimate underperformer in the past year and Pagano has seized the opportunity to purge the remnants left over from the Vic Fangio era. Expect the front seven to maintain their pressure rate and begin converting it into sacks and interceptions.

The remaining teams here are likely just streaming options at this point, obviously subject to change.

15. Tennessee Titans: Ranking 11th among Fantasy defenses last year, the Titans feature a boring and sometimes leaky 4-3 defense. Generating the lowest pressure rate on this list at 21.1 per cent, Tennessee racked up 43 sacks (6.3 per cent sack rate, 20th in the league) and 14 interceptions (eighth in the league). However, the team suffered a significant loss with the departure of DT

17. Dallas Cowboys: The Cowboys are filled to the brim with blue-chip talent at almost every position. Generating a pressure rate of 23.4 per cent (15th in the league), Dallas managed just 39 sacks (6.4 per cent sack rate, 18th in the league) and seven interceptions (last in the league). There is a lot of room for improvement under new management. Perhaps Jamal Adams can help.

English industrial band Cabaret Voltaire originally launched in 1973, remaining active until 1994 before taking a 20-year break, and they’re still at it today. In 2001, the band released a compilation entitled Conform to Deform ’82/’90 Archive. From this efforts comes the 12″ version of “Sex, Money, Freaks” remixed by French DJ Francois Kevorkian, one of the founders of house music.

Now it’s your turn. Let us know in the comments below which teams you think are too high, too low or missing.

By Lucas Chan
Tags: 2020 NFL Draft Kit, Defense/Special Teams Rankings
This entry was posted on Sunday, July 5th, 2020 at 6:22 pm and is filed under 2020 NFL Draft Kit, Cheat sheets, FOOTBALL, Lucas Chan. You can follow any responses to this entry through the RSS 2.0 feed. Both comments and pings are currently closed.