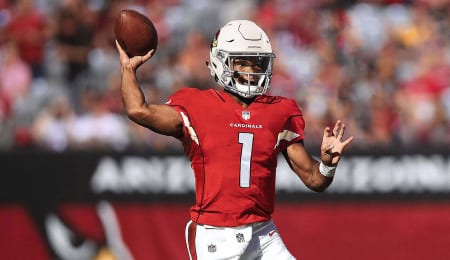 No. 1 overall pick Kyler Murray will square off against the 49ers. (Sports Illustrated)

In case you hadn’t noticed, the ‘Niners (7-0) are back in a big way. Led by a superb defense, they head into Arizona (3-4-1) on a major roll. The Cards had been rolling themselves, that is, until running into the Saints on Sunday.

Winners of three of the last four games, the surging Cardinals now embark on a brutal stretch of games, starting with the undefeated 49ers at Phoenix Stadium. First overall selection Kyler Murray has been unimpressive in the air so far, posting a line of 292-1,988-7 with four interceptions. The rookie quarterback deals a bulk of his damage on the ground, rushing for 279 yards and two touchdowns. Unfortunately, San Francisco has suffocated opposing quarterbacks to 128.7 yards and 0.7 touchdowns per game with a 58.0 passer rating.

If it wasn’t bad enough, the ‘Niners also generate a sack on 11.87 per cent of their defensive plays while containing opposing quarterbacks to 4.3 yards per game and no touchdowns on the ground. Even though Blake Shelton loves him (see video below), it’s a hard fade on Murray.

With David Johnson and Chase Edmonds not expected to suit up, newly acquired Kenyan Drake falls in at the right place but at wrong time. Cardinals’ running backs average 24 touches, 126.9 yards and 1.3 touchdowns per game, but the 49ers’ defense won’t have a problem shutting the run game down. Flex Drake if you must, but there are better options than this.

Slot man Fitzgerald is averaging 7.4 targets per game while maintaining his usual ADoT of sub-10 yards. He draws CB K’waun Williams as the softest matchup on paper. With an obvious height disadvantage, Williams will tested by Murray constantly. Don’t let the matchup fool you though; Williams has held opposing pass catchers to 1.7 receptions and 14.4 yards per game, while stifling opposing quarterbacks to just an 85.6 passer rating. Fitz is a mid-tier WR3 this week.

Kirk, the poor man’s Fitzgerald, boasts identical efficiency metrics while manning the X. The young receiver is likely to meet final boss CB Richard Sherman. Sherman is imposing his will on opposing quarterbacks this season to a tune to of a 60.2 passer rating, allowing just one touchdown. Kirk is a risky low-end WR3, dependent on splash plays or touchdowns. Because Arizona plays a lot of four-WR sets, it’s worth mentioning that both KeeSean Johnson and Byrd have value in season-long leagues; just not this week. By the very same logic, Cardinal tight-ends are negligible. Go ahead, name one. We’ll wait.

Jimmy “Baby Brady” Garoppolo and the 49ers will travel to Arizona after a scorching start to the season with no excuse not to continue the momentum. He won’t be asked to do much outside of managing the game and avoiding turnovers. On a team featuring the ground assault the ‘Niners have, San Francisco’s quarterback will be hard-pressed to put up relevant Fantasy numbers even against a defense allowing 277 passing yards per game and a 116 passer rating. Expect low-end QB2 numbers with decent upside.

Head Coach Kyle Shanahan is doing a masterful job at re-envisioning the run game. Through seven weeks, Tevin Coleman and questionable scratch Matt Breida are combining for 25.6 looks and 133 yards per game. Conveniently, Arizona’s run defense has completely unraveled, allowing 130.7 yards per game after ranking in the top 10 at the beginning of the season. Fire Coleman up as a surefire RB2 and, in the absence of Breida and Raheem Mostert, Jeff Wilson as a high value flex.

The people’s tight end Kittle leads the team in targets, receptions and air yards. After being robbed of a touchdown last week, he will work out his anger on the Cardinals defense, which is allowing 6.8 receptions, 87.8 yards and a touchdown per game to opposing tight ends. Kittle is the TE1 this week in the entire NFL. As for the rest of the pass catchers, the 49ers’ low passing velocity is unable to support the receiver corps’ Fantasy production.

On average, Jimmy G throws for 212 yards and 1.3 touchdowns. With Kittle commanding 26 per cent target share, Samuel, Pettis and Goodwin are left to fight over the remaining 157 yards and 0.5 touchdowns every week. All three can be a WR2 on any given week, but if you must pick one, Samuel is the better dart throw this week.

The late great George Harrison is obviously best known for his work as the lead guitarist for The Beatles, but he had a damn brilliant solo career in his own right. In 1973, he released his fourth solo effort, Living in the Material World, and the first single from that album was “Give Me Love (Give Me Peace on Earth).” The B-side, was “Miss O’Dell,” a song held off the original release, but included on the 2006 remaster as a bonus track.

Now it’s your turn. Let us know in the comments below how you think this matchup will shake out and which players you’re targeting for your Fantasy football team.

By Lucas Chan
Tags: Thurday Night Football
This entry was posted on Wednesday, October 30th, 2019 at 6:41 pm and is filed under FOOTBALL, Lucas Chan, Thursday Night Matchup. You can follow any responses to this entry through the RSS 2.0 feed. Both comments and pings are currently closed.