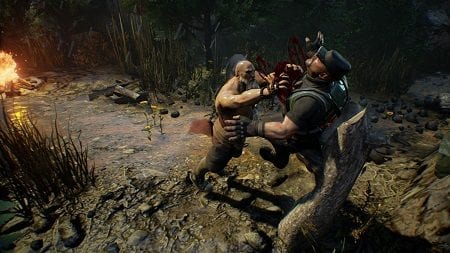 When we saw the trailer for Redeemer: Enhanced Edition for the Nintendo Switch our first thought was it looked like Kratos was starring in a top-down brawler. Quite frankly, that in and of itself was enough to pique our interest. While the launch was reportedly dogged by frame rate issues, we waited for a patch to be released before diving in and didn’t experience any slowing of substance with the action.

Combat here is split into two areas: melee and ranged. Switching between the two is easy as you simply move the right stick to aim your gun. When the gun isn’t raised you’re either punching and kicking or using one of the handheld weapons (i.e., knives, wrenches, stun rods, etc.) to beat your foes to a pulp. Prompts will also appear for one-hit kills when approaching undetected or standing near an object that you can interact with, such as a table saw.

It’s a pretty clean setup, and most of it feels right from the get go. The caveat to that is the ability to parry incoming attacks. Enemies will emit a glow when they’re ready to attack, and if you time it properly you’ll block their move and leave them vulnerable to counters. It sounds fine, but it’s housed on the left bumper, which always felt unnatural, especially in handheld mode. As such, we relied almost exclusively on attacks and rolls throughout our time.

Redeemer lags a bit in the presentation, offering up underwhelming visuals on the Switch whether docked or handheld. There isn’t a lot of detail, the environments aren’t particularly interesting and some sections are a little too dark. On the plus side, things animate smoothly, there’s ample amounts of blood and guts, and the executions are suitably brutal. Music, sound effects and voice acting are passable.

There is the skeletal outline of a story in Redeemer in which you play as Vasily, an ex-Spec Ops style mercenary that walked out on his violent cohorts to start a life of peace as a monk at a secluded monastery. Naturally, that peace is shattered when your old life descends on your new one, forcing the kick-ass version of Vasily to return and extract revenge on those that wouldn’t just let him live!

The story is generic and forgettable, but that doesn’t really matter as this is an action game through and through, and on that front Redeemer delivers. With little deviation your job is to move forward and kill everything in your path with great fervour. Your skill set is divided into two paths, monk and soldier, and every blow you strike or shot you fire starts filling individual meters for things like punches, melee weapon usage, shotguns and pistols.

It’s a straight one-to-one evolution with punch attacks increasing your punch level and shooting enemies with an SMG moving that up. Each time one of those areas goes up your overall monk or solider level increases as well, and you can max out at 50 on each side. At certain intervals you’ll get to unlock new perks and abilities, making Vasily feel more and more like a bad ass as once-daunting enemies become glorified victims.

If there’s an area the game struggles it’s with enemy variety. It really feels like you’re facing the same handful of types over and over and over again, which can make extended play sessions start to feel repetitive. The infrequent boss battles are largely underwhelming, too, and by the time you’ve fully leveled up the challenge struggles to keep pace.

All told you’ll run through close to 20 levels at roughly five or six hours, depending on how often you’re defeated — you can also hunt for scrolls/tablets for immediate level ups, but there’s plenty of experience to go around without them.

While it held our attention and enjoyment level, we aren’t all that keen at jumping back in, at least right away, so it doesn’t feel like there’s much replay value unless you feel like battling it out in Arena mode. Also, as part of the Enhanced Edition, local co-op play is available.

If you enjoy brawlers and/or twin-stick shooters you can’t go wrong with Redeemer: Enhanced Edition, which is a fun way to spend a few hours beating hapless mercs and creatures into unrecognizable goo.

By HC Green
Tags: Nintendo Switch, Redeemer: Enhanced Edition, Video Game Review
This entry was posted on Monday, September 16th, 2019 at 1:45 am and is filed under Herija Green, Video Game Reviews. You can follow any responses to this entry through the RSS 2.0 feed. You can skip to the end and leave a response. Pinging is currently not allowed.