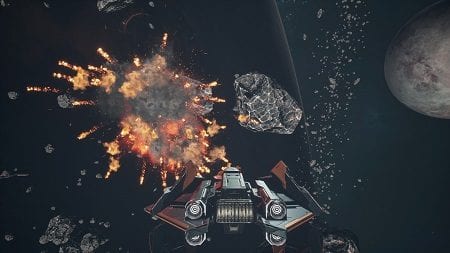 Gamers learned long ago to be skeptical of mobile titles moving to consoles, a phenomenon that often feels like a quick cash grab and one that’s been repeated with tremendous frequency on the Nintendo Switch. The latest game to get a port is Subdivision Infinity DX, a 3D space shooter that’s looking to make an interstellar jump and prove it’s worth its US$15 asking price.

Flying games can be difficult to handle sometimes, but Infinity DX keeps it pretty simple, allowing you to easily change directions via the analog sticks while accelerating and decelerating using the left shoulder/trigger. Combat is housed on the right side with weapon options on both buttons — the primary gun automatically reloads when dry, though you can manually do it with one of the face buttons. Rolling is handled with the d-pad, but it feels awkward in the heat of battle in terms of your hand positioning.

It’s all serviceable, but it feels more like Zero-G fighting in a third-person shooter than flying around a sophisticated aircraft. In the sparsely populated reaches of space, the game never manages to create any real sensation of speed or even forward motion. Instead, stationary objects like asteroids and outposts feel like they’re just getting bigger. While we didn’t mind how it handled, those looking for intense ship-to-ship combat are likely to find it lacking.

Subdivision Infinity DX is a decent looking game, whether docked or in handheld mode, though we preferred the latter as the small screen keeps the detail work sharp. Weapon effects and explosions are enjoyable as well. The generic music does little to enhance the presentation, nor do the static image screens that are used to move the narrative forward.

As for the story, there’s not a lot there. You respond to a distress call and find a lot more trouble than you were bargaining for. AV-2, the ship’s automated pilot, will fill in some secondary info as you clear missions and jump to new locations, but it’s completely text based and doesn’t move the needle one way or the other. At best, it provides marginal context for whatever battle you’re about to enter.

Combat is decent, but as we noted above, there isn’t much intensity. We did a lot of drifting and turning to fire at enemies, and then retreating behind objects to wait for our shields to regenerate. The idea of dogfights in which there’s a ship on your tail or you’re bearing down on an enemy was pretty much nonexistent. This, more than anywhere else, is where the mobile roots can be felt as fighting is much more tactics and minor adjustments, especially with the weapons using an auto-lock function.

Each location you travel to will contain a series of five missions, culminating in some kind of “boss” fight. As you complete missions you’ll earn coins, gear crates, blueprints and more, all of which can then be used to purchase and/or upgrade new ships and weapons. Missions can be replayed as often as you’d like, and there are also open-ended exploration levels in which you can fly around in an attempt to locate materials and other goodies.

Like pretty much everything else with Subdivision Infinity DX, it’s fine. There’s nothing here that’s going to infuriate you or stand out for being poorly executed or thought out. At the same time, there’s nothing particularly memorable or exciting going on, either.

Subdivision Infinity DX should keep you entertained in short bursts, but it feels overpriced. If you’re in the market for a space shooter to play on the go with your Switch we’d recommend waiting for a flash sale.

By HC Green
Tags: 3D Space Shooter, Nintendo Switch, Subdivision Infinity DX, Video Game Review
This entry was posted on Saturday, August 24th, 2019 at 7:44 pm and is filed under Herija Green, Video Game Reviews. You can follow any responses to this entry through the RSS 2.0 feed. Both comments and pings are currently closed.