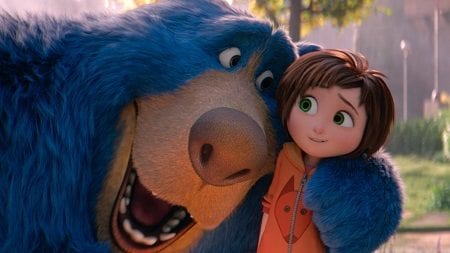 In the modern world, animated movies are big business, and Paramount has been ratcheting up its own offerings under the Paramount Animation banner. Its last effort, Sherlock Gnomes, was a decent if forgettable little romp. This time we’re getting an “imagination come to life” story with Wonder Park, featuring the vocal talents of Mila Kunis and John Oliver, among others.

As a little girl, June Bailey (Brianna Denski) and her mother (Jennifer Garner) create a made-up amusement park known as Wonderland where everything they’re able to imagine becomes real via Peanut (Norbert Leo Butz), who hears the mom’s voice and uses magic to create it. When her mom grows ill, however, June starts to disengage from Wonderland and becomes overly protective of her father (Matthew Broderick).

With her mother gone away in an attempt to recover, June’s dad sends her off to math camp in an effort to reintegrate her with her peers. A farewell note convinces June that her dad can’t make it without her and sneaks off the bus to return home. In the forest she discovers Wonderland as a physical place, but it’s not the version from her imagination. Instead, the park has fallen into disrepair and is being dismantled by rogue plushies (Chimpanzombies) and a gathering storm known as “the darkness.”

Upon arriving, June finds her stuffed animals have come to life, including Boomer the bear (Ken Hudson Campbell), Greta the boar (Kunis) and Steve the porcupine (Oliver). Together they’ll need to track down Peanut and defeat the Chimpanzombies before the darkness can swallow the entire park.

Visually, Wonder Park is quite impressive. The animation is first rate, and since the actual park of Wonderland is based purely on imagination, the people working on it pretty much had carte blanche to do whatever they wanted. The Chimpanzombies are suitably adorable, much in the same way the coconut pygmies were in Moana, and June’s animal buddies are cute and colourful as well.

There’s a lot going on, especially when they’re actually in Wonderland, and that kind of fast-paced energy should appeal to younger children. Plus, in spite of the often frenetic pace it never gets too loud or annoying for any adults in the room. There are some serious themes woven into the fabric of Wonder Park as well, though it’s probably a pretty small sweet spot for kids that are old enough to understand the message(s) and still young enough to find the presentation compelling.

Circling back to those serious themes, while it may be a noble effort, the animation and plot are geared toward younger kids, which makes including the mother’s serious illness as a driving force in the film a questionable decision. That part of the film is largely ignored outside of the early stages as well, with most of the Wonderland stuff being pure action and fantasy with the occasional moment of melancholy over the park’s demise.

For as many sight gags and jokes as the movie throws at you, it isn’t particularly funny. Even watching it with a four-year-old there were precious few laughs, though to be fair they seemed entertained. Still, in the modern landscape where there are so many animated options for parents and kids, it’s hard to envision this being part of the rotation.

And that leads us to Wonder Park‘s biggest problem: Inside Out exists. Pixar’s efforts is a far more clever take on children confronting emotional stress, even if it’s a cross-country move instead of an illness that sparks the trouble. Sure, you can enjoy them both, but one is simply a much better movie that holds up to repeated views.

There isn’t a lot of extras, and if you take out the three rather lengthy step-by-step “how to draw” various characters featurettes you’re getting less than 15 minutes of content. This includes one short deleted scene (read: less than one minute), a sing-a-long to the cute Pi song and the usual footage of actors recording their lines — from which Kunis is notably absent. So unless you’re interested in the drawing bits there’s precious little here.

There were some questionable choices made with Wonder Park, but at the end of the day there’s nothing wrong with the movie. It’s just a simple story, best suited for younger kids who will probably miss the themes and enjoy Wonderland’s mayhem.

By Herija Green
Tags: Animated Movies, Blu-ray reviews, John Oliver, Mila Kunis, Movie Review, Wonder Park
This entry was posted on Saturday, June 15th, 2019 at 5:08 pm and is filed under Herija Green, Movie Reviews. You can follow any responses to this entry through the RSS 2.0 feed. Both comments and pings are currently closed.