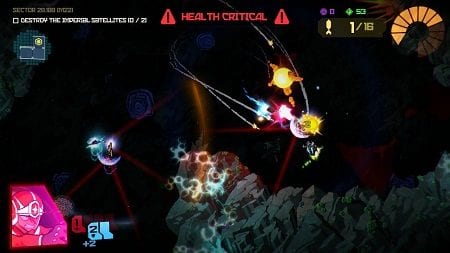 Galak-Z promised to be a lot of different things when it first hit the PS4 back in 2015 — rogue-like shooter, 2D space combat game, 1980s anime revival, mech combat action. Against the odds, developer 17-Bit pulled it off and managed to successfully incorporate each of those items. Now, Nintendo Switch owners are getting their chance to experience it, along with The Void DLC, as Galak-Z: The Void: Deluxe Edition.

At its core, Galak-Z‘s controls are quite simple. The left analog stick controls the direction of your ship. It’s not a rotational tank-like control, it’s an actual pointer. Think of it as the gun on a twin-stick shooter, except you need to hit a button to shoot.

The triggers are used for throttling and reversing, respectively, though slamming them together will cause your ship to brake — an extremely helpful ability. There’s also an additional limited boost. Other buttons take care of attacking, dodging, and transforming between ship and mech (or “battroid” for you old-school Macross fans).

If you’re a fan of 1980s anime, you’ll recognize Galak-Z as a deep love letter to the genre. The Axelios starship looks like a Zentreadi cruiser (Robotech) painted up like the Yamato (Yamato/Star Blazers). Protagonist A-tak looks like the wild-haired hero from any show from the genre, and the cel-shaded graphics help give it a truly drawn feel. Other genre staples include missile contrails, bubble explosions and mech design straight out of Gundam.

During actual gameplay, though, it’s not as detailed. The camera view is similar to old-school arcade shooters like Sinistar or even Asteroids. For the most part, it’s easy to get a grasp on everything, but when you’re fighting a wave of enemies in a cluttered space, things get confusing pretty quickly.

Sometimes there’s just too much going on, which can cause the occasional framerate hiccup. Between swarming enemies, exploding environments, missile contrails, laser blasts and explosions, it will take some time before you feel totally comfortable tracking all the action.

While the levels are procedurally generated, the overarching plot of each season is set, and that means the voice actors move the story forward. Both dialogue and performance are intentionally over the top, almost more like a B-movie rather than the “war is hell” tone of Robotech. But this tongue-in-cheek approach fits well, and it allows the whole experience to be fun and goofy.

As noted, Galak-Z takes some time to get used to. The core gameplay is flying around environmental hazards while blasting away at various enemies. That sounds simple, but Galak-Z provides a very nuanced experience that combines 360-degree aiming and momentum-based movement. The result is gameplay that can be equal parts precise and infuriating, though once you get the hang of it, it’s pretty darn fun.

Understanding throttle and momentum is the key to both movement and survival. Since bumping into the environment doesn’t hurt you, you’re free to be as cavalier as you want. Enemies will exchange laser blasts with you once they detect you, which means you can attack with guns blazing or stealthily hide behind the odds and ends of the environment.

Thanks to the momentum-based movement, it’s possible to strafe, circle and dash past enemies while blasting away at them, and once you get transformable mech capabilities (unlocked after the first season), another layer of combat emerges.

Add on a range of collectible power-ups placed within each procedurally generated level and you’ll see why the game is much deeper than you may anticipate. Even after 15-to-20 hours, you’ll find new power-ups and ways of attacking.

Galak-Z presents itself in four “seasons” of five “episodes” each, with each episode being a procedurally generated level. Each season has an arc, so despite the random nature of levels, specifics are often the same. Here’s the rub, though: you must defeat an entire season, without dying, otherwise you’ll have to start over.

Episodes take about 5-to-15 minutes depending on how quickly you go through them, and power-ups don’t carry over from life to life, so even if you’ve powered your way through to the season boss, a few mistakes and it’s all for nothing. This is not true in Arcade Mode, however, which does allow for checkpoints.

Beyond the four seasons, the post-launch DLC The Void is also included, which contains an endless mode meant to test your abilities as well as a daily challenge with pre-determined loadouts.

We died a lot playing Galak-Z: The Void: Deluxe Edition, but we still kept playing. The combination of 1980s mech anime, rogue-like levels and nuanced combat controls is a blast — no pun intended. There’s a steep learning curve to start, but you’ll be rewarded once you get past it.

By Mike Chen
Tags: Galak-Z, GALAK-Z: The Void: Deluxe Edition, Video Game Review
This entry was posted on Thursday, April 11th, 2019 at 2:15 am and is filed under Mike Chen, Video Game Reviews. You can follow any responses to this entry through the RSS 2.0 feed. You can skip to the end and leave a response. Pinging is currently not allowed.