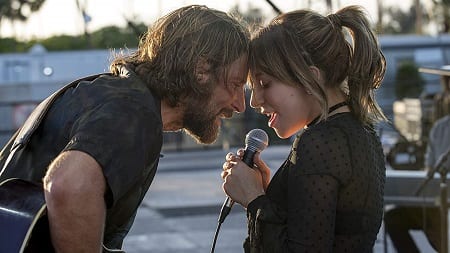 Originally created back in 1937, A Star is Born has seen multiple iterations with the latest bringing together actor Bradley Cooper, making his directorial debut, and musician Lady Gaga, making her first appearance in a significant acting role. The film, which was both a critical and box office hit as a theatrical release, was nominated for a Golden Globe and is also up for Best Picture at the upcoming Academy Awards.

Jackson decides to invite Ally to his next show, and after initially refusing she relents and is flown on a private plane. Once there, Jackson calls her on stage to perform a duet of a song she wrote the night before. A recording finds its way to YouTube, and Ally quickly becomes famous. She starts to do more and more stuff with Jackson on stage, while off it the two quickly fall in love. After one show Ally is approached by record producer Rez (Rafi Gavron), who offers to sign her.

Although we really enjoyed the film overall, we felt the ending was a little too predictable and done to maximize an emotional response. Yes, things like that do happen, but Jackson’s downward spiral seems to happen too quickly, and the idea that one catty conversation with Ally’s agent was enough to push him over the edge seemed a bridge too far. It also felt like Rez was really exposing himself in the process as he could’ve easily been fired as a result if word got back to Ally.

There’s a surprisingly interesting 30-minute “making of” feature that makes up the entirety of the non-musical extras. Granted, some of the “you’re great, no, you’re great” couch talk with Gaga, Cooper, Elliot and others can be a bit much, but there’s also a few good tidbits about how the film was made and the preparation that went into it. It’s a nice complement to the feature.

By HC Green
Tags: A Star is Born, Blu-ray reviews, Bradley Cooper, Golden Globe, Lady Gaga, Movie Review, Sam Elliot
This entry was posted on Friday, February 15th, 2019 at 6:43 pm and is filed under Herija Green, Movie Reviews. You can follow any responses to this entry through the RSS 2.0 feed. Both comments and pings are currently closed.