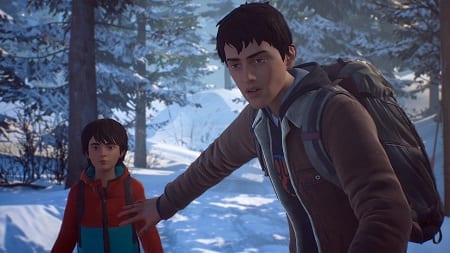 Hiding or exposing Daniel’s powers is at the heart of Episode 2.

The second chapter of Life Is Strange 2, entitled Rules, thematically resumes where the first episode left off — dealing with Daniel‘s emerging powers and how to handle them — but practically picks up several months after the initial episode.

This comes into play in the first section of the game, which is about the same length as the first episode. Without going into spoilers, Daniel makes an understandable but short-sighted decision. And as Sean tries to work with it the best he can, the situation inevitably turns bad and becomes a major test for how you as a player choose to guide Daniel.

The story eventually pushes forward, and in doing so, reveals much more about the brothers’ family history, particularly on their mother’s side. At the same time, the series’ narrative dovetails into the Captain Awesome demo that was released shortly before the first episode launched.

Through all of this, a third element gradually begins to enter the conflict. First, there’s the factor of guidance, and second, there’s the factor of morality. But as the episode progresses, the game starts to integrate the legal cliffhanger from the first episode, making the decision to expose Daniel’s power — even if it’s the morally right thing to do — a critical one.

This creates some severe consequences. In one crucial decision, the moment can end in one of three ways: an innocent can get severely hurt, Daniel can save the innocent, or the innocent can be physically safe but emotionally damaged. There’s no true right decision, so the result is based purely on your judgment.

Rules ends with a cliffhanger that leaves Sean and Daniel in peril — and how you get there is based on the strength of your relationships. In fact, when reviewing the choices at the end of the episode, you might be surprised at how the smallest decisions leave an impact on a character.

Building off the strong start of the initial episode, Life Is Strange 2 continues carving out its own identity in all the right ways. From subtle to life-altering stakes, Rules shows that there are no right decisions, leaving it to your own moral compass to guide the way.