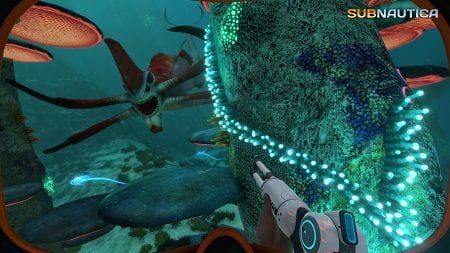 Originally released last January on PC, Subnautica made its way to the Xbox One (as part of Microsoft’s Winter of Arcade promotion) and PlayStation 4 in December. Now we’re finally getting to don our fins and take the plunge into the icy depths of this open-world survival game that takes place beneath the waves.

First-person swimming isn’t the most user-friendly experience out there, and with the vast majority of Subnautica taking place underwater there are definitely some frustrations. This usually comes when trying to establish (or maintain) distance between yourself and an object, such as when you’re attempting to look for something along the seabed from above. It’s nothing that can’t be worked around, but it can be annoying.

Beyond that, though, things handle pretty well. The inventory system is well designed — even if we couldn’t figure out initially that we had to be outside of the life pod to drop items — and cycling through your “hot keys” is plenty efficient. Once you move beyond just manually swimming around, that feels smooth and responsive as well.

Based purely on graphical prowess, Subnautica isn’t all that impressive. It looks pretty good, but there’s lots of slow-loading textures and pop in (one moment there isn’t a kelp forest, and the next moment there is!). When you consider the vastness and creativity of the world and the creatures in it, however, it’s hard not to be drawn in. Exploration is at the game’s heart, and with so many different zones full of mysteries it keeps you engaged as the hours pile up.

As a mostly solitary journey, the audio is primarily composed of music and ambient sound — the distress calls and various recordings that you find are well performed, but they’re few and far between relative to the songs of sea creatures great and small. There’s something extra vulnerable about being in the water where danger can approach from anywhere, and hearing the sound of a nearby predator that you can’t see is one of the creepier things we’ve experienced in a game in a long time.

While it’d be disingenuous to classify Subnautica as a narrative-driven game, it does have an overarching storyline that follows your efforts to survive after crash landing on an alien world. You’ll receive radio messages and distress calls, typically generating a location for you to travel to and explore, thus pushing the story forward with some mixture of new plot details and/or blueprints that help you explore further or deeper.

Initially, all of your efforts will revolve around basic survival. Using your pod’s replicator you’ll seek out food and water, but even that’s a slow process at the beginning with thirst being a constant struggle and uncured food going bad quickly. Once you get those basic needs under control you’ll move on to salvaging wreckage and plundering natural resources to make new tools and better equipment.

That may not sound like a particularly original setup, but Subnautica handles it incredibly well both in pacing and the number of items you can construct. One minute you’re scouring the shallows for salt deposits, and the next you’re tapping into underwater volcanoes to harvest the geothermal energy necessary to power the multi-level base you’ve constructed. It’s the kind of thing we obsessed over in the days of Morrowind and Oblivion taken to the next level (and with an actual purpose this time).

For better or worse, combat is essentially nonexistent here with your best practices almost always being to avoid predators. That doesn’t mean you’re helpless, however, even if it seems that way early on when a stubby knife is all that stands between you and a stalker. Eventually you’ll find a weapon that can temporarily stun hostile (or benign) creatures to facilitate your escape, and the vehicles have a few tricks up their sleeves as well. Still, it really helps build tension when confrontation is largely limited to non-lethal means.

As good as it all is, Subnautica does take some time to hit its stride. The early moments can be overwhelming as you try to learn the game’s rhythms and explore the surrounding shallows for things essential to your survival. Looking back, those opening hours of sheer confusion hit just the right notes of being stranded somewhere completely foreign, but at the time there was some hand wringing and “now what?” exasperation. All we can say is, stay the course.

That assumes, though, that the loop of exploration, resource gathering and building floats your boat because that’s what drives Subnautica‘s engine. We’d frequently spend chunks of time simply looking for a specific element, breaking apart mineral deposits in hopes of stocking up for an upcoming build. Customizing our base brought our inner OCD out even further as we’d lose track of time tinkering with some minor element just because it was cool.

If that sounds like tedium to you, then you’re probably in the wrong spot as even for us there were times when things seemed a little too tranquil with action and story elements making up such a small part of the gameplay. Consider that a qualifier as Subnautica is most definitely a “your mileage may vary” kind of title.

It took a little while to sink its hooks into us, but once it did, Subnautica had us. The mix of exploration and building progression kept us thinking ‘just five more minutes’ into the wee hours of the night. If its gameplay appeals to you, this isn’t to be missed.

By HC Green
Tags: PC, Subnautica, Video Game Reviews
This entry was posted on Friday, January 25th, 2019 at 9:50 pm and is filed under Herija Green, Video Game Reviews. You can follow any responses to this entry through the RSS 2.0 feed. Both comments and pings are currently closed.