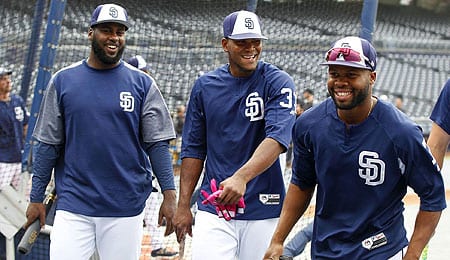 Franmil Reyes (left) has given the Padres some hope. (K.C. Alfred/San Diego Union-Tribune)

This week, Addison Russell is away from the Cubs for now with more details coming out about his alleged domestic abuse; the Red Sox did the worst thing imaginable for Yankee fans, clinching the AL East on the Yankees’ field; and Luke Voit became the 12th Yankee with double digit dingers this year — a new MLB record.

And now, let’s get to our final batch of Fantasy baseball waiver wire recommendations for this season…

Franmil Reyes, OF, San Diego Padres (ESPN: 24.1 per cent; CBS: 29 per cent): Reyes stroked a pair of hits, drew a walk and scored twice Wednesday to run his hit streak to 11 games. No, he hasn’t been bashing homers like he did in August (although he recently snapped a dinger slump), but there’s nothing wrong with his .375 BA this month. Reyes has quietly put together one hell of a rookie effort in a half season of play, especially feasting on righties (.358/.434/.657). This Dominican behemoth (6’5″, 275) was averaging nearly a run per game and ranked fifth in the entire minor leagues in exit velocity before getting summoned from Triple-A in mid-May. Yes, there are rumblings that his reported age of 23 is incorrect, but regardless of how old he is, he’s proved he can mash, and is worth owning down the stretch. Seems like an affable chap, to boot (see video below).

Ty Buttrey, RP, Los Angeles Angels (ESPN: 24.2 per cent; CBS: 14 per cent): Need some saves in the final week? Try Buttrey, a virtual unknown until he started bagging saves in Disneyland a couple of weeks ago. Now he’s on a run of eight straight scoreless outings, and he’s looked almost unhittable since reaching the majors just over a month ago. Judging by what Buttrey did at Triple-A, his K rate of 11.15/9 seems sustainable, and we love the fact he’s basically maintained his minor league walk rate.

Alex Gordon, OF, Kansas City Royals (ESPN: 21.2 per cent; CBS: 14 per cent): Forgot about this one-time Fantasy stud, didn’t you? Gordon raked three hits and drew a walk on Friday, giving him hits in six of the last seven games, during which he’s lashed four doubles and driven in eight runs. After bottoming out in July, he bounced back in August with a season-high 15 runs and 15 RBI and has built on that with his best month in September (.280 BA, .360 OBP with 15 RBI already). On a thinner Royals team, Gordon is seeing more action this year, and he’s actually managed his most productive season since 2014. Despite three straight years of being a below average player, at the very least he’s worthy of a roster spot to wrap up 2018.

Curtis Granderson, OF, Milwaukee Brewers (ESPN: 2.3 per cent; CBS: 6 per cent): Another veteran flyhawk that’s having a bit of a renaissance is Granderson, who has been starting more often lately. He hasn’t been doing a ton with the extra reps (0-for-5 Friday with a whiff, although he was robbed of a hit thanks to a diving grab from Pablo Reyes). Still, Granderson is enjoying his best month since June, and overall, has hit much better this season despite his highest strikeout rate and worst plate discipline since 2013. He’ll be a somewhat useful NL-only asset the rest of the way.

Adam Wainwright, SP, St. Louis Cardinals (ESPN: 17.4 per cent; CBS: 31 per cent): To wrap up our theme of vets making a last stand, how about Wainwright’s six shutout innings with nine punchouts against the Dodgers on Sunday? He looked very rusty in his first start back after an extended elbow-induced DL stay, but was in vintage form last weekend. Wainwright’s WHIP is a career worst through a half-dozen starts, but he’s trending in the right direction and has a great matchup Saturday against the punchless Giants. In a small sample size, he’s inducing far more infield flies this year, but is giving up balls to centre field at a higher rate than ever.

California rockers Van Halen has always been a pretty big band, but it sure hit a commercial home run with 1984, its sixth album. Fittingly for us, we were 18 at the time, just about old enough to start noticing that older women could actually be sexy. With this in mind, we offer up “Hot for Teacher.”

By RotoRob
Tags: Franmil Reyes
This entry was posted on Saturday, September 22nd, 2018 at 2:52 pm and is filed under BASEBALL, RotoRob, The Wire Troll. You can follow any responses to this entry through the RSS 2.0 feed. Both comments and pings are currently closed.