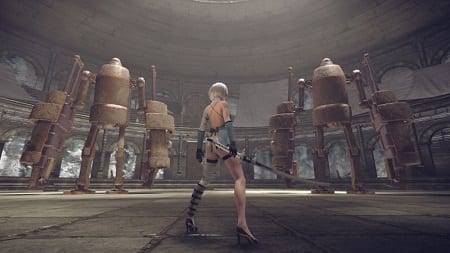 Although all of Square-Enix’s “Western” properties (e.g., Tomb Raider, Just Cause and Deus Ex) have long been available for Microsoft’s systems, many of the more traditional Squaresoft titles (e.g., Dragon Quest, Star Ocean, Kingdom Hearts and so on) have remained elusive. Perhaps the worm finally started to turn at this summer’s E3.

It was there that Microsoft announced that the highly anticipated Kingdom Hearts III would be coming to the Xbox One — marking the series’ Xbox debut. Although not as high profile, a second title was also announced, with Square bringing 2017’s excellent NieR: Automata to the XB1, adding its DLC and christening it the Become As Gods Edition.

It makes for a chaotic scene when strafing with your Pod while also hacking away at enemy robots, and though a lock-on function exists, it seems to have a mind of its own, often jumping from one target to the next when your reticule crosses. Deploying your Pod’s special attack when locked on also feels a bit clumsy.

In addition, your character, known as 2B, is often accompanied by a wingman (9S) that assists in battle, and he has a Pod of his own. 9S handles himself well, and you’re free to switch up his tactics to complement your play style at any time. For instance, if you like pecking away from range with your Pod you can instruct 9S to concentrate on close-quarters fighting.

You’ll have access to four different weapon types (small/large swords, spears and bracers), each with their own strengths and weaknesses. As with Pods, it’s easy to switch back and forth to juggle attacks for massive combo damage. The combat reminded us of games like Bayonetta and Devil May Cry, and that kind of variety is ideal for an action RPG.

NieR‘s Become As Gods Edition looks better than ever — though, in the interest of full disclosure, we played the original on a standard PS4 on a 55-inch 1080 TV, and this time it was on an Xbox One X with a 70-inch 4K TV. That being said, its biggest graphical weakness remains backgrounds, some of which are decidedly sparse by modern standards.

There isn’t a ton of dialogue, and what’s there would rate as average, but it gets the job done. Where the audio is much more interesting is the soundtrack, which features a robust mix of instrumental tracks and fully voiced songs. That diversity is a definite strength.

Hundreds of years have passed since the end of the original NieR, and Automata finds humans forced to inhabit the moon after aliens attacked Earth. To fight back, mankind has created androids known as the YoRHa to augment the remaining androids on Earth in their efforts to destroy the machines. It’s into this new reality that YoRHa units 2B (that’s you) and 9S are sent.

Once on the ground it quickly becomes apparent that strange things are happening, including machines displaying human emotions and social behaviours. This evolution looks to be the work of a pair of robots with human appearances going by the names of Adam and Eve, but there’s much more to unravel beneath the surface.

Although the fundamental story beats aren’t too difficult to follow, the minutia becomes quite dense, and tracking the various twists and turns is challenging. For some, the convoluted narrative might be a drawback, but even within that the game effectively creates emotional connections and is also pared with fantastic action.

As with any modern RPG, Automata features a main quest along with plenty of side missions to acquire valuable items and experience while being given reasons to explore the world. It isn’t the most user-friendly interface, particularly the map, but the mix of fetch and combat quests is solid and offers more story payoff than most.

Also included is the 3C3C1D119440927 DLC (just rolls off the tongue), an arena-based add-on that allows you to visit three areas, each with its own set of challenges. While it wasn’t a great value as a standalone piece of DLC, it’s a nice extra that offers some high-level fights and cosmetic goodies to unlock for devoted players.

If you’ve been unable to experience NieR: Automata before now, the Become As Gods Edition is the best way to do it. It remains one of our favourite games in recent memory and is an easy recommendation to Xbox One owners.

By HC Green
Tags: Just Cause, NieR, NieR: Automata -- Become As Gods Edition, Square Enix, Tomb Raider, Video Game Review
This entry was posted on Thursday, July 12th, 2018 at 8:07 pm and is filed under Herija Green, Video Game Reviews. You can follow any responses to this entry through the RSS 2.0 feed. Both comments and pings are currently closed.