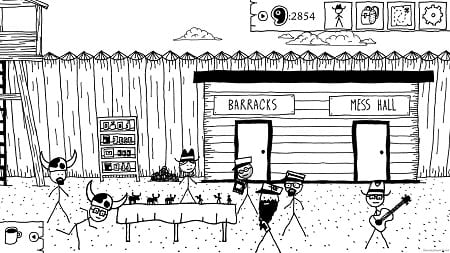 Fourteen years passed between the release of developer Asymmetric Publications’ first game (2003’s Kingdom of Loathing) and its second, last year’s PC-only release West of Loathing. Its crude, childish appearance immediately grabbed our attention, but we had to wait until it made its way to the Nintendo Switch to give it a shot.

Two things stand out about West of Loathing: its unique, ultra simplistic presentation, and the layer upon layer of humour in its writing and storytelling. Starting with the former, the game proves just how far charm and originality can carry the graphical side as you can barely conceive of something so basic with its stick figures, poorly drawn cows and snakes, limited animations and complete lack of colour. There isn’t much complexity to the music, either, and yet somehow it all works.

As for the story, your character travels West in search of fame and/or fortune, taking on the characteristics of one of three available classes (Cow Puncher, Beanslinger and Snake Oiler) and using those diverse abilities to outmaneuver your enemies. There’s a main plot thread to follow, but the world is absolutely loaded with side quests and areas to explore, loot to obtain and loads of wittily written prose to fill the hours.

It’s the clever writing that ultimately ends up carrying the game for the 10-plus hours you’ll need to see your way through, constantly upping the ante on purely ridiculous ideas, enemies, items and more. There are times when the amount of text feels excessive, but that works to the Switch’s advantage as we found ourselves enjoying the game in relatively short sessions — it’s easy to pick back up and play no matter where you choose to stop.

Combat, while an important part of West of Loathing, is generally underwhelming. The turn-based action pits you and a partner against various enemies, allowing for basic melee and ranged strikes along with a number of class-specific attacks that burn up your limited supply of action points. It all works just fine, but then again the nuts and bolts of the system aren’t the problem.

What is the problem is the inconsistent difficulty, which wildly swings from laughably easy to almost certain death with far too few battles that occupy the vast amount of space in between. We’d say the majority of battles are won without the enemy even getting a turn, but then every so often you bump into an enemy that kills your partner in one hit and puts you away shortly thereafter.

Although that kind of inconsistency breeds frustration, it’s largely mitigated by the game’s generous approach to your failures as you’ll pick up right where you were with all your items. The only cost is adverse status affects that can be wiped away by returning to a saloon and going to sleep. There are some other minor issues — an increasingly unwieldy item list and occasionally ambiguous solutions top the list — but none of it undermines the overall experience.

West of Loathing features a high number of locations to discover and visit. You’ll travel between them via an overhead map, typically triggering one random encounter (a roaming enemy, treasure to loot, a newly found locale and so on) in the process. Successfully defeating enemies or completing tasks for NPCs grant experience, and there are enough attributes and skills to assign points that you can build some fairly different character types.

Whatever shortcomings the game may have here and there, we keep circling back to how well written it is, layering jokes on top of jokes for hours on end. It’d be folly to try to do its cleverness justice here, but suffice to say it isn’t limited to the game world as Loathing routinely breaks down the fourth wall to address the player for some of its best material. Puns, dumb jokes, more puns, and all of it delivered without using profanity? Impressive.

West of Loathing is so charming and well executed in what it tries to do, it’s easy to overlook its unimpressive combat.

By HC Green
Tags: Nintendo Switch, Video Game Review, West of Loathing
This entry was posted on Saturday, June 2nd, 2018 at 2:44 am and is filed under Herija Green, Video Game Reviews. You can follow any responses to this entry through the RSS 2.0 feed. You can skip to the end and leave a response. Pinging is currently not allowed.