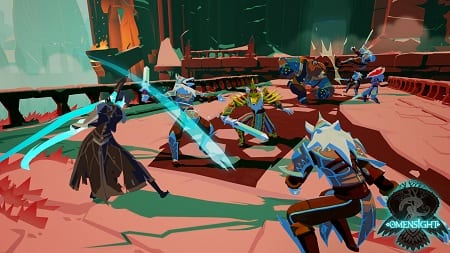 Combat in Omensight is a colourful affair.

​While it may not be a full-fledged sequel to Spearhead Games’ 2016 release Stories: The Path of Destinies, Omensight is most assuredly its spiritual successor. The developer once again explores the world of anthropomorphic animals with a time-travelling twist, tasking you with saving the world for an impending apocalypse.

There are elements of light platforming here, but the majority of your time will be spent fighting through enemies. At its core, combat is pretty straightforward hack n’ slash fare as you string together basic and heavy strikes to form combinations. Enemy attacks are tipped by the presence of exclamation points above their heads, giving you time to strike them directly or evade — do so at the right moment and time will slow briefly.

You’ll also have access to a handful of special moves, each operating on a cooldown timer. You can dash, grab and throw objects (or enemies), and create a time-slowing bubble. You’ll usually be working with a partner as well, one that can unleash a unique ability of their own that you can call forth. Some are more effective than others, though, making combat easier when you have certain companions with you.

Your last trick is the ability to collect energy from uninterrupted strikes, filling a meter as you go and allowing you to use cost-specific moves. For example, firing a projectile from your sword costs one charge, while an insta-kill attack on a single enemy costs two. It’s quite difficult to avoid the mix of melee, ranged and area attacks, though, so we rarely got more than two or three before we took damage or a fight ended and the energy drained from inactivity.

Although decent enough, the combat has a floaty feel that makes peppering enemies with strikes less satisfying than it could be. The lack of your own decent Area of Effect attack is a downer, too, elongating lesser fights by making you target everyone individually. Items like explosive barrels and collapsing pillars can sometimes be used, but we still think there should’ve been a more potent ability in your repertoire.

Much like its predecessor, Omensight offers up decent visuals and locations that lose their luster the more times you revisit them. The mostly fixed camera perspective downplays the simplistic nature of many areas, but it does so at the cost of some quality of life on the gameplay side. Your character has a cool design, though, and the whole thing is quite colourful.

Voice acting shades on the rough side with some bland performances from its limited cast of characters. It’s not irritatingly poor a la Fear Effect Sedna at least, and to be honest the more time you spend with them the better it sounds.

In Omensight you play as The Harbinger, a supernatural warrior dispatched to ward off the coming apocalypse. Your task is to unravel the murder of the Godless-Priestess and locate her soul, which is needed to stop Voden, the would-be destroyer of the world. To do this you’ll need to travel to the day of Voden’s arrival and follow one of four creatures that have some piece of knowledge needed to stop the event.

Initially you’ll be limited to following two characters: Draga, the Emperor’s dutiful commander, and Ludomir, a grizzled warrior intent on killing the Emperor. Eventually you’ll encounter Ratika, the leader of Rodentia (basically the resistance), and Indrik, the Emperor, and the opportunity to follow them will be unlocked.

From there you’ll bounce between the four of them, learning hints about what happened and occasionally discovering the titular “omensights.” These represent the game’s biggest moments, revealing pieces of what actually happened that you can then project into the minds of any of the four, sending them on a new path and furthering the investigation.

It’s an interesting idea, piecing together a story from multiple viewpoints, and it’s fairly well done, though heading back to the same areas eventually loses its steam — to its credit, Omensight will allow you to skip to the important event if you revisit a memory stream that, for whatever reason, you couldn’t properly complete earlier.

There are RPG elements as well, as The Harbinger will collect experience and in-game currency. The former allows you to level up and unlock new abilities (and eventually more powerful versions of said skills), and the latter is for upgrades, such as more health, additional slots for storing energy and boosting the damage your weapons inflict.

Unfortunately, the various upgrades don’t fundamentally change anything. Fighting at the start feels basically the same as fighting when completely leveled up. Sure, you have a few new tricks, but the challenge level stays marginal throughout beyond the odd boss battle.

On that note, it’s worth mentioning that the final boss is pretty annoying. Rather than spoil his various attacks and cheap tricks, let’s just stick with some presentation choices. The final area favours a pinkish hue around everything, which effectively obscures the projectiles you’re supposed to be dodging. Plus, a zoomed-in camera appears that’s not used anywhere else in game and makes gauging distance between you and the boss a little problematic.

After finishing the game you’ll be given a rundown of the four characters’ fate, and at this point they never change — an update is apparently in the works to offer a second outcome. For now, though, minus shooting for a “good” or “bad” ending there isn’t much reason to revisit.

There’s a strong concept at the centre of Omensight, and the execution is competent enough to make it a mostly enjoyable game. With a bit more polish, however, it could’ve been even better.​

By HC Green
Tags: Omensight, Spearhead Games, Stories: The Path of Destinies, Video Game Review
This entry was posted on Saturday, May 19th, 2018 at 8:48 pm and is filed under Herija Green, Video Game Reviews. You can follow any responses to this entry through the RSS 2.0 feed. Both comments and pings are currently closed.