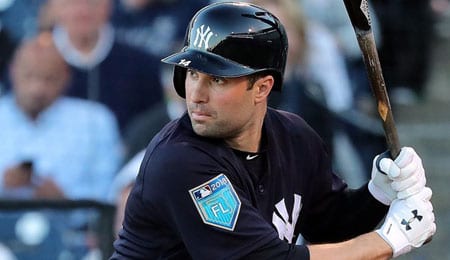 Welcome back to another week of Fantasy baseball. We’re into mid-May now, leaving us just over three weeks away from the 2018 MLB Draft, so expect more dynasty picks in the coming weeks.

Neil Walker, 2B/1B, New York Yankees (ESPN: 2.5 per cent; CBS: 13 per cent): Walker has been holding down first base, but with Greg Bird back soon and Gleyber Torres now entrenched at second, he’s been taking reps at third base to increase his chance of PT. Walker has hit safely is six of the last eight games, and before Friday, had scored runs in seven straight games (nine total runs), so actually has been playing better lately. There were concerns that by signing Walker (and Chris Drury) the Yanks would block some of their prospects, but clearly that’s not the case. And now Walker may become a utility man, a role which may still hold value in AL-only leagues and actually increase his value in some instances, given the positional flexibility. He also seems to have quickly grasped the Yankee way (see video below).

Brad Brach, RP, Baltimore Orioles (ESPN: 22.6 per cent; CBS: 31 per cent): Brach remains a solid short-term source of saves while the O’s await the return of Zack Britton (Achilles). Brach hit a rough patch a couple of weeks ago, but has righted the ship with three straight scoreless outing, recording saves in each of the last two. He somehow won 14 games as a reliever over the previous two years, but is winless so far. Still, Brach’s already earned five saves despite some awful bouts of wildness. Roll with him while you can.

Eloy Jimenez, OF, Chicago White Sox (ESPN: 4.5 per cent; CBS: 39 per cent): Jimenez may be the next top prospect to get recalled. After missing some time at the start of the season with a pectoral injury, he’s gone 30-for-90 so far at Double-A, but is really heating up lately. He had a streak of nine straight multi-hit games, and had gone 19-for-43 over the last 10 games, with 10 RBI before Saturday (when he was 3-for-5 with a homer and three RBI). Jimenez’s walk rate is down, but he’s offset that by making better contact. It’s clear he’s ready for the next step, so jump on him now while his ownership is fairly low.

Jeremy Hellickson, SP, Washington Nationals (ESPN: 16.9 per cent; CBS: 48 per cent): The veteran righty seems to have nine lives, doesn’t he? On Tuesday, he hurled 6 2/3 shutout frames, allowing just two hits to the Padres while whiffing eight and walking none to earn his first win of the season. That gives Hellboy back-to-back scoreless outings, and through five starts, his hit rates have never been better. His control has been off the charts good, his command fantastic, and he’s even limiting long balls. Given Hellickson’s history, it’s doubtful this lasts for long, but while he’s rolling, you may as well grab him and see how it plays out.

By RotoRob
Tags: 2018 MLB Draft, Fantasy Baseball, Neil Walker, New York Yankees
This entry was posted on Saturday, May 12th, 2018 at 6:42 pm and is filed under BASEBALL, RotoRob, The Wire Troll. You can follow any responses to this entry through the RSS 2.0 feed. Both comments and pings are currently closed.