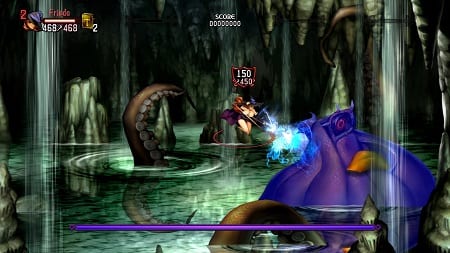 Originally released in 2013 on both the PlayStation 3 and Vita, Dragon’s Crown is getting a fresh coat of paint and returning as Dragon’s Crown Pro for the PlayStation 4. The new version features upgraded audio and graphics but no additional content — in fact, your PS3/Vita saves and trophy progression both carry forward. Let’s see how it holds up.

Simplicity is the rule in Dragon’s Crown Pro with nearly all of your attacks mapped to the square button; the lone exception is that pressing circle will unleash a powerful, class-specific attack. You can evade, block and jump, as well as pick up items in the environment, but this is a pretty straightforward side-scrolling beat ’em up.

One slightly odd element is that the right analog stick is used to control an on-screen cursor, which you primarily use to direct your thieving companion to unlock doors and treasure chests. It felt more natural on the Vita, as you simply tapped the screen, but it never needs to be done during combat so it doesn’t really affect enjoyment.

Dragon’s Crown Pro has been remastered to take advantage of the PS4 Pro’s 4K capabilities, and running on that system it looks richly coloured with sharp spell effects and attack animations. It’s not a quantum leap over the original, but that’s more a testament to Vanillaware’s quality art design and beautiful environments than a knock on Pro‘s quality. It looked good then, it looks great now.

What hasn’t changed is the game’s style, which includes scantily clad (and excessively endowed) women bouncing around the screen. Some will view it as objectification and dismiss the game out of hand, and while we can’t argue that perspective we weren’t bothered by it. Sure, some stuff might’ve earned a head shake, but during actual combat you’re unlikely to notice.

Voice acting is mostly limited to an announcer with occasional snippets of dialogue tossed in from other characters. Easily the best part of the upgraded audio experience is the orchestral soundtrack, which nails the atmosphere of whichever area or battle you happen to be in.

Story wise, Dragon’s Crown Pro never becomes much more than an excuse to do some old-fashioned dungeon crawling. Initially you’ll be restricted to using computer-controlled players, which is a mixed bag. In combat your A.I. cohorts typically hold their own, but trap avoidance and environmental damage are another matter as they clumsily step onto spikes or get bombarded by fire to the point of death.

Given the uneven teammate A.I., joining forces with other players is the preferred method, and once you complete the first nine stages that option becomes available (though you can choose to soldier on with the A.I.). On that front, Pro‘s connection to earlier versions is a blessing as there were always plenty of people available to fill the three A.I. slots.

What also opens up is a second path through each of the nine areas, leading to a more powerful boss that drops a talisman when defeated. Collecting those unlocks the final area and a showdown with the main baddie. Defeat him and you can ascend to a higher difficulty while also raising the level cap. With multiple difficulty settings and an eventual cap of 99 there’s plenty to do.

In addition, there are six unique character classes to play as, some of which make the game much easier than others so those looking for a serious challenge can find it here. As you’d suspect, the melee-based classes (fighter, dwarf and amazon) are better suited for casual players, whereas ranged characters (wizard, sorceress and elf) require a more experienced touch.

Even more than that, the classes are legitimately different and require unique tactics to succeed. This is particularly true once you start teaming up with others as finding the proper mix of skills and abilities can mean the difference between success and failure. There’s a lot of depth hidden beneath the veneer of a simple hack n’ slash, and those willing to invest the time will come to appreciate that.

Finding loot and leveling up are key elements as well. Each trip through a dungeon will net you four things: experience, gold, loot and piles of bones. The first two are self explanatory, and the loot system hearkens back to RPGs past as found items are identified only by their rank, requirement (class and level) and category (sword, bow, etc.). To use your loot you’ll need to have it appraised, at which point all data becomes available.

As for the bones, these are the remains of dead adventurers, and upon returning to the central hub you can either resurrect them so that they can join your party moving forward or bury them permanently in the hopes of recouping an item or two.

Experience will earn you a skill point for each level you gain. These are then used to purchase new and enhanced abilities from two card decks: one is class-specific, which is where you’ll get new attacks and skills, and the other consists of general upgrades like increased health.

Although constant progression fosters a sense of satisfaction, the game can definitely feel repetitive after a while. Enemies are constantly scaling up to present a sustained challenge, and that means you’ll often need to farm for experience and items before completing primary missions. Plus, even with a second path and various hidden rooms you’ll be seeing the same areas and enemies a lot.

Still, that repetition is a price worth paying for the tremendous amount of content to be found here with the aforementioned multiple difficulty settings and character classes, along with a full slate of side missions that open up as you progress.

While Dragon’s Crown Pro is the best version of a really well-made fantasy side-scroller, it doesn’t have any new content, which could make an MSRP just slightly below a brand-new AAA release a tough sell.