The Wire Troll: Jason Hammel Dealing Despite Being Winless 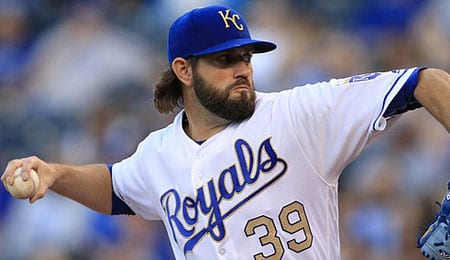 Welcome back to another week of Fantasy baseball. We’re into late-April now, and perhaps the glut of rained out games that’s plagued MLB is now over. It’s time to dip into the waiver wire.

This week, MLB Commissioner Rob Manfred has confirmed the idea that if the season is shortened, salaries will be cut as well; the Mets have sent struggling starter Matt Harvey to the bullpen; and Carlos Rodon is feeling good and hopes to return to the White Sox in about a month, so you might want to consider stashing him now.

And now, let’s get to this week’s Fantasy baseball waiver wire recommendations, with plenty of options for those of you seeking rotation help.

Jason Hammel, SP, Kansas City Royals (ESPN: 2.9 per cent; CBS: 10 per cent): Tampa Bay’s 10th round pick in 2002 has enjoyed a pretty fine career, proving durable as a control specialist and generally, a No. 4 type starter. He got roughed up in his season debut, but has pitched much better since then, highlighted by a tough no-decision on Friday when he gave up just five hits and two runs over nine innings (which tied his career high). Over his last three starts, Hammel has only given up 16 hits and four runs in 20 IP with 13 Ks against four walks. He remains winless thanks to KC’s popgun attack, but with a 3.20 ERA and .235 BAA through 25 1/3 IP, he’s definitely worth adding. Hammel was on his game Friday, racking up 11 swinging strikes, the second time in four starts he’s hit double digits. At this rate, he could top his career high in innings pitched for the second straight season, and perhaps even reach 200 for the first time. Maybe Hammel can even provide some of that “rhythm” that the Royals need (see video below).

Bartolo Colon, SP/RP, Texas Rangers (ESPN: 8.3 per cent; CBS: 11 per cent): Speaking of veteran hurlers, few have anything on Colon, still chugging along at the age of 44. Splitting his duties between the pen and rotation, he’s been excellent in either role, most recently limiting the World Champion Astros to a single hit over 7 2/3 IP. Colon has no record yet, but his 0.70 WHIP, 1.45 ERA and superb K/BB rate scream for Fantasy attention. He barely tops 90 on the radar gun these days, but considering how crap he was last year, this latest renaissance is truly remarkable.

Homer Bailey, SP, Cincinnati Reds (ESPN: 5 per cent; CBS: 18 per cent): What is this, alumni week? We’re coming at you with a bunch of greybeard hurlers this week, but what can we say? The geriatric set has taken over! Cincy’s 2004 first rounder, a lost cause for most of the last three seasons, looks pretty good this season. In fact, he’s tossed quality outings in three of his four starts, putting up a pretty solid ERA despite a big goose egg in the win column. Maybe Bailey is simply healthy at last. It’s worth picking him up to find out.

Braden Shipley, SP, Arizona Diamondbacks (ESPN: 0.1 per cent; CBS: 1 per cent): Hardly a grizzled veteran, Shipley still seems to have been knocking on the door for some time. Well, that opportunity may finally arrive now that Taijuan Walker has been lost for the season to Tommy John surgery. Shipley made the bigs last year, pitching in 10 games, mostly relief, but failing to earn a win. He’s begun the season at Triple-A and has shown better control and improved hit rates. Let’s see if this minor league vet can finally stick in the Show.

By RotoRob
Tags: Jason Hammel
This entry was posted on Saturday, April 21st, 2018 at 5:33 pm and is filed under BASEBALL, RotoRob, The Wire Troll. You can follow any responses to this entry through the RSS 2.0 feed. Both comments and pings are currently closed.