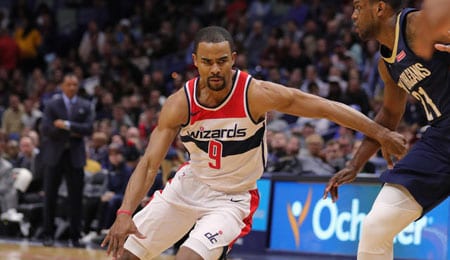 Ramon Sessions still has something left in the tank. (USA Today Sports Images)

Welcome back to another week of Fantasy basketball. This marks the season finale of the NBA Wire Troll, and we hope that our waiver wire recommendations have helped steer you to glory. Congrats if you’re still in the running. If so, we’ve got a few names to throw at you — especially for those of you seeking steals.

This week, Tyronn Lue has returned to the Cavs, and will soon be back coaching the squad as he gets past his health issues; Kevin Durant says his desire to repeat as champion is behind all his techs and ejections this season; and Robin Lopez’s tirade at the officials will cost him $25,000.

Ramon Sessions, PG, Washington Wizards (ESPN: 0.2 per cent; CBS: 1 per cent): Given his inconsistent minutes, Sessions is a deep-league add only, but if you need steals and dimes, he might help you down the stretch. Twice he’s had multi-steal efforts over the last five, and he’s coming off back-to-back six-assist games. Sessions’ PT is up a bit lately, and he’s getting his most touches in March since the beginning of the season. The veteran has been strictly a backup since landing in Washington, but he still has something left to offer. Just note that with John Wall (knee) expected back Saturday, this may be the end of Sessions’ run. Still, Sessions is a player that has looked great running an offense at a very high tempo over his career. Hell, the former Wolfpack star has his own performance centre at the school (see video below).

Stanley Johnson, SF, Detroit Pistons (ESPN: 1.7 per cent; CBS: 20 per cent): Johnson hasn’t necessarily enjoyed the breakout that many anticipated, but you’ve got to love his work in the thefts department. On Thursday, he had four steals, and last week he enjoyed a five-swipe game. Johnson isn’t sinking as many buckets lately and his rebounding has dipped in each of the last three months, but if you need steals, he can help. He’s done a better job of getting to the line this season, and that’s a trend that will have to continue if he’s going to enjoy a real breakout. Johnson likes to tease owners by showing real ability in the supporting stats from time to time, and that makes him difficult to own over the long haul.

Anthony Tolliver, PF, Detroit Pistons (ESPN: 1.8 per cent; CBS: 4 per cent): With Blake Griffin out, Tolliver is proving he still has something left in his tank. Tolliver has three straight games of at least 14 points, going 16-for-30 from the field and 12-for-12 from the line. His touches were actually down this month, so this recent uptick has really salvaged his value. Overall, the veteran has sunk his most buckets per game since his breakout campaign in 2009-10. As long as Tolliver is starting for Griffin, he’s a fine play, and it’s nice to see the journeyman get his moment in the sun.

By RotoRob
Tags: Ramon Sessions
This entry was posted on Saturday, March 31st, 2018 at 3:15 pm and is filed under BASKETBALL, RotoRob, The Wire Troll. You can follow any responses to this entry through the RSS 2.0 feed. Both comments and pings are currently closed.