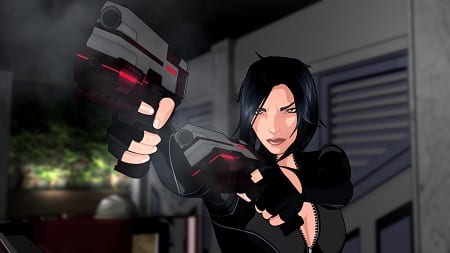 Now there’s a woman of a… higher caliber…

Back at the turn of the century, developer Kronos Digital Entertainment released Fear Effect, an action/shooter that controlled like old Resident Evil games. A year later that was followed by a prequel, which proved to be the end of both the developer and the series… until now. Published as part of the Square-Enix Collective, Fear Effect Sedna aims to resurrect the franchise.

Unlike the first two Fear Effect titles, Sedna favours an isometric view with a mix of stealth, combat and puzzle solving. From trailers and still shots it looks like a more realistic Invisible Inc. setup, but in practice it falls well short of what that game was able to do.

While definitely limited, stealth is the preferred method. If you can sneak up on an enemy unawares you can unleash a one-hit kill. Enemies will notice corpses but typically slip back into their patrol patterns after a cursory scan of the area. If you even brush their cone of vision, however, get ready for a quick reload as everyone is immediately aware of your presence and swarms to your location. That kind of instantaneous response gets annoying pretty quickly.

And yet that’s still preferable to straight gunfights. The game has a cover system, but everyone completely ignores it with enemies again flocking to wherever you’re crouched and shooting at you until one of you is dead. Meanwhile, your teammate will happily wander out to get shot dead as well.

There’s a tactical mode to combat in which you can pause the action and give directions — get behind this object, target this enemy — to your partner (you’re not always with someone, though most solo sections are stealth-oriented) but they’re apt to ignore your orders in favour of, you guessed it, standing in the open and trading bullets.

That devolves pretty much every combat section into a war of attrition, rendering all but meaningless things like special abilities and the “Fear Effect” gameplay mechanic in which you do more damage the more injured (read: afraid) you are. It feels like the developers knew the combat A.I. was a miss as medical packs are found constantly, allowing you to progress despite the constant beating you and your A.I. partner are taking.

It’s unfortunate that these elements are so poorly implemented because Fear Effect Sedna does a really good job with its puzzles. They generally make sense within the context of a level and have smart solutions in which you’ll need to pay attention to work it out. The only downside with these is that failure is met with a cut scene, followed by a reload, which can pile on the minutes.

Presentation is a mixed bag with the cel-shaded cut scenes and a rich soundtrack the clear highlights. The levels are decent enough as well, though the distant viewpoint makes for small characters and limited detail work. Voice acting is pretty brutal, which further hurts an admittedly disjointed plot. On the plus side, developer Sushee effectively captures the look and atmosphere of the originals.

As for the story, Sedna picks up a few years after the original and brings back characters Hana, Rain, Glas and Deke while adding Axel to the crew. Here we see Hana and Rain hired to procure an artifact only to have it snatched from under their noses, sending them to Greenland where things get darker in a hurry with the requisite supernatural activity.

It’s a decent enough story, but it would’ve been more effective with better performances. Instead we get what sounds like cold reads of the material devoid of context, which sees dramatic moments delivered with all the emotion of a drink order. Add that to the oft-disappointing gameplay and the eight or so hours you’ll spend completing it can feel like a slog.

Everything we saw leading up to the release of Fear Effect Sedna made it look like a game we’d enjoy, but unfortunately for every good element there’s seemingly two bad ones. That makes for an uneven and ultimately disappointing experience.

By HC Green
Tags: Fear Effect, Fear Effect Sedna, Square Enix, Video Game Review
This entry was posted on Monday, March 12th, 2018 at 4:34 am and is filed under Herija Green, Video Game Reviews. You can follow any responses to this entry through the RSS 2.0 feed. You can skip to the end and leave a response. Pinging is currently not allowed.