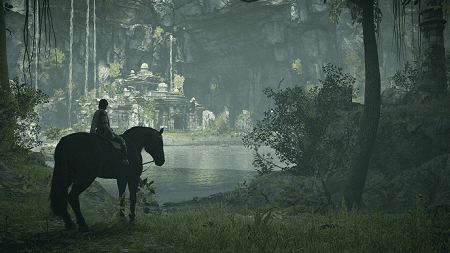 Shadow of the Colossus in 4K? Yes, please!

Originally released on the PlayStation 2 back in 2005 and then brought to the PS3 six years later as part of a high-definition remaster with Ico, Shadow of the Colossus is back once again, this time as a full blown remake to take advantage of the PlayStation 4’s power. To the game’s enduring credit it remains a truly unique experience.

As great as Shadow of the Colossus was, the asterisk to its brilliance was its odd controls. The mapping was off, and it just didn’t feel like Wander (or Agro) was all that responsive. Thankfully, things have been tightened up markedly here with the layout being rethought and modernized to fall in line with industry norms (like “X” for jump), though the original setup is available for purists.

Even with the improvements, things can still feel clunky. Some of it is in service to the game, but it’s hard to watch Wander awkwardly ascend after years of Assassin’s Creed making the process effortless. The camera also has an odd tendency to sit slightly off centre, particularly when riding Agro, which flies in the face of what we’re used to.

What makes matters worse on that front is that the camera is constantly trying to reset itself, creating a perpetual battle to get the angle you want. On foot you’re not moving fast enough for it to matter, but on horseback it can be a real annoyance as the adjustments can send you crashing into objects and breaking your stride. An option to disable the automated camera might’ve helped.

Every bit as impressive as the natural beauty is the colossi themselves. As incredible as it was to see creatures of that scope over a decade ago, the remastered versions are so impeccably crafted that they serve to recreate that sense of wonder. Sure, other games feature oversized foes, but the detail with which these are created put them on another level.

There are two visual modes for the remake: Cinematic and Performance. With the former you get optimized graphics at 30 frames per second. Switching to the latter the frame rate will jump up to 60 at the cost of some graphical fidelity, but it’s still gorgeous.

Although the graphical overhaul gets top billing here, the game’s soundtrack remains a highlight that helps drive home the emotions of a story that’s light on exposition. We know Wander is doing these things for a reason, but there’s a profound sadness associated with taking down the colossi, and the music is a big part of that feeling.

In Shadow of the Colossus you play as Wander, who enters the Forbidden Lands on a quest to resurrect a mysterious woman. He carries with him a magic sword, and when an entity known as Dormin sees it he tells Wander that if he can use the blade to slay 16 idols (the colossi), the woman’s soul will be returned to her body.

Each colossus must be tracked down by raising your sword in the sunlight; doing so will create a concentrated beam of light that acts as a compass to guide you in the right direction. From there you’ll need to locate the creature. Even with the guidance, some are tougher to find than others, though given the vastness of the realm it can be very liberating just to ride around and explore — there’s something captivating about the solitude.

Once you find the various colossi, things get interesting. Whereas most games force you to fight through legions of minions for a showdown with the boss, here combat consists of nothing but “boss fights.” Each creature is massive, requiring you to manage your grip strength as you steadily scale the behemoths and strike at weak points to eventually bring them crashing down.

It’s pretty straightforward early on, but as you work your way through the 16 of them, the game keeps throwing more wrinkles at you, including bringing the environment into play. For instance, one colossus is too heavily armoured to climb initially so you need to trick it into smashing its weapon into something hard enough to bust off pieces, thus creating a path for ascent.

At around eight hours, Shadow of the Colossus isn’t a long game, and outside of a few difficulty settings and a camera mode there’s no additional content to speak of. Still, if you find the world as fascinating as we do there’s certainly some mileage to be found in simply riding Agro around looking for Easter eggs and taking in the serenity of its design.

Sony has done such an exceptional job with updating Shadow of the Colossus that it almost feels like an entirely new game. As such, it’s something that both longtime fans and newcomers should pick up without hesitation.

By HC Green
Tags: Agro, Assassin's Creed, Ico, PlayStation 2, PlayStation 4, PS3, Shadow of the Colossus, Sony, Video Game Review, Wander
This entry was posted on Wednesday, February 7th, 2018 at 12:43 am and is filed under Herija Green, Video Game Reviews. You can follow any responses to this entry through the RSS 2.0 feed. Both comments and pings are currently closed.