Blu-ray Review: The Mountain Between Us 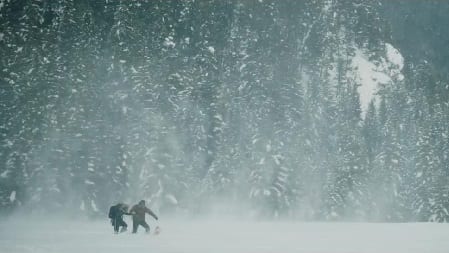 Nothing like sub-zero temps to warm the fires of passion. Or not.

Based on the novel of the same name, The Mountain Between Us brings together Academy Award winner Kate Winslett and Idris Elba and drops them in the Colorado wilderness under the watchful eye of relatively unknown director Hany Abu-Assad. Now it’s up to Elba and Winslett to make sparks fly in the unforgiving cold.

Photojournalist Alex Martin (Winslett) and neurosurgeon Ben Bass (Elba) both find themselves trapped unexpectedly at the Boise airport when an incoming storm forces all commercial flights grounded. With Bass scheduled to perform surgery in Baltimore the next day and Martin to be wed, the two hire private pilot Walter (Beau Bridges) to fly them to Denver ahead of the weather.

During the flight Walter suffers a stroke, causing the plane to crash high up in the Rocky Mountains, killing him and stranding Ben, an injured Kate and Walter’s dog. While they initially hope to hold up and be found and rescued, they quickly decide that with Walter having not filed a flight plan, their only hope is to descend the mountain and find help before they starve or freeze to death.

As they struggle to survive, Alex and Ben begin to fall for one another even though Alex is engaged and Ben still mourns for his late wife. While their developing emotional connection gives them another reason to fight to make it back to civilization, it raises a new set of questions as to what will happen to their lives if/when they do return.

Shot primarily in Canada, The Mountain Between Us is a beautiful film, and the generally slow pace allows you to take it all in and really appreciate how secluded they are. Outside of one blatantly CGI moment when Elba unconvincingly dangles over the edge of a cliff, everything looks authentic — which the vast majority of it is.

Elba and Winslett are quality actors, and they both carry their parts well. Elba’s size and physicality make it seem plausible that he could aid Winslett extensively across such a perilous journey, and Winslett gets to carry more of the emotional side of the equation before being given her own moment to shine in a survivalist capacity.

That deliberate pace is a double-edged sword, and there were certainly times when we teetered on the precipice of boredom. Perhaps it’s Hollywood’s fault for training us to expect showdowns with wolves and/or bears and death defying leaps. Whatever the reason, the lack of threats and external drama make for a pretty low-key movie.

We’d be hard pressed to call Mountain a compelling love story. The dialogue and setups don’t really foster much emotion, and it’s mostly the star power of Winslett and Elba shining through that creates whatever attachments we felt. Having not read the book, we can’t speak to the faithfulness of the adaptation, but there doesn’t seem to be a lot of meat on the bone here.

There’s nearly 15 minutes of deleted scenes, most of which appear to have been cut for purely timing purposes. One does change the story to a degree, though, with Elba waiting a full day before going after Kate rather than what appears to be a couple of hours in the final cut. Of the three “making of” segments, the one about shooting in isolation is by far the most interesting and drives home some of the challenges they faced.

If you’re looking for an evening of non-threatening entertainment that everyone can handle, The Mountain Between Us fits the bill with good acting and gorgeous scenery. There’s little to sink your teeth into, however, and minus any depth it’s easy to forget once you’ve finished watching it.

By HC Green
Tags: Academy Award, Blu-ray reviews, Idris Elba, Kate Winslett, The Mountain Between Us
This entry was posted on Monday, January 8th, 2018 at 9:52 pm and is filed under Herija Green, Movie Reviews. You can follow any responses to this entry through the RSS 2.0 feed. Both comments and pings are currently closed.