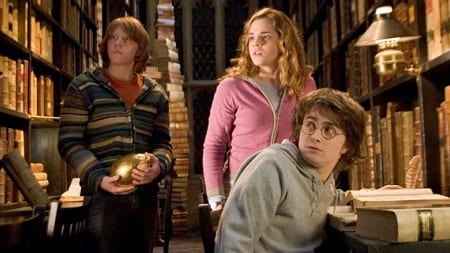 ​With 4K and Ultra High Definition becoming more prevalent (and affordable), film publishers are starting to dig through their libraries and upgrading older movies to play on the newest formats. After releasing the four most recent Harry Potter films earlier in 2017, Warner Bros. has now made Years 1-4 available in 4K.

Each copy includes the feature film on 4K and Blu-ray, along with an additional Blu-ray that contains all special features and bonus content — of note, there are no newly created extras, and instead you get everything in the previously released Ultimate Editions. A digital copy is included as well.

Harry Potter and the Sorcerer’s Stone (Year One)

Originally released in 2001, this is the film that introduced the world to Harry Potter (Daniel Radcliffe), Ron Weasley (Rupert Grint) and Hermione Granger (Emma Watson) along with J.K. Rowling‘s wizarding world. It’s obviously critically important because it lays the groundwork for the ensuing seven movies, but with the main characters all 10-to-12 years old, some of the acting comes across pretty wooden.

Making the jump to 4K is a boon to the earlier films in many respects, adding clarity and colour to Hogwarts. It also makes it easier to take in all of the action happening in the background, which is chock full of activity and magical goings on. The special effects generally look good, though being nearly 20 years old there are moments where more clarity doesn’t necessarily help the CGI (*cough* toilet troll).

Harry Potter and the Chamber of Secrets (Year Two)

After fanatically adhering to the source material in the original, director Chris Columbus stretches his wings more this time around (though he’s still probably too obsessed with cramming minor details into the film). With the actors secure in their roles and the pressure of bringing a beloved literary work to the screen in the past, Secrets feels more fanciful. It’s also the first hint that the franchise won’t be sticking to upbeat family-friendly fare.

Some of the subtle changes that were lost in the Blu-ray version are recaptured here with a very strong job of adjusting the colours to bring out some of the lost, darker tones. The CGI, particularly Dobby and the basilisk, seems noticeably improved over the original.

Harry Potter and the Prisoner of Azkaban (Year Three)

Columbus gives way to Alfonso Cuarón (Children of Men), the late David Harris is replaced by Michael Gambon as Dumbledore, and Gary Oldman joins the cast. All of which adds up to our favourite installment in the eight-film series. It’s a great story, and one that really represents the sweet spot, pushing Harry down a darker path while still retaining much of the childlike wonder of the first two. It also has a more formidable antagonist in Sirius Black, who’s light years ahead of Quirinus Quirrell.

Azkaban means the introduction of the Dementors, the hellish guardians of the wizarding prison, along with the Animagus, magical shape shifters. All of this, with the possible exception of Professor Lupin‘s wolf form, holds up quite well in 4K — if you ever wanted to show someone a single Harry Potter film to get them invested in the series, this is the one, and this is the version.

Harry Potter and the Goblet of Fire (Year Four)

If Azkaban is 1A in the HP hierarchy, Goblet is 1B. In fact, Goblet might even blend the lighthearted and darker elements more effectively while introducing several interesting new characters of its own. The Tri-Wizard Cup at the heart of it all is a great plot device, allowing for a school-based competition while the peril of the outside world continues to intrude on life at Hogwarts. Add to that the main characters growing up and there’s a lot going on.

Advancements in special effects from Year One in 2001 to this (2005) are clear, and there are some real showcase moments, such as Harry’s first fight with Voldemort and his Tri-Wizard challenge to retrieve an egg guarded by a dragon. The school spirit allows for a lot of distinct colours, too, which really pop in 4K.

While some of the special effects from the earlier films are exposed even further by a higher quality picture, the vast majority of it benefits from the superior technology. It’s probably not worth the added financial investment for casual fans, but true Potterheads should be happy enough with the return on investment to make the jump.

By HC Green
Tags: Blu-ray reviews, Chamber of Secrets, Daniel Radcliffe, Emma Watson, Goblet of Fire, Harry Potter, Harry Potter Years 1-4 4K UHD, Movie Review, Prisoner of Azkaban, Sorcerer's Stone
This entry was posted on Friday, November 24th, 2017 at 6:56 pm and is filed under Herija Green, Movie Reviews. You can follow any responses to this entry through the RSS 2.0 feed. Both comments and pings are currently closed.