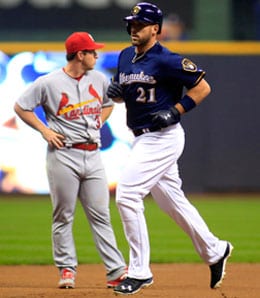 The 2017 Major League Baseball season is officially over and the Houston Astros are World Series champions. For most of the year, it looked like the Los Angeles Dodgers were going to win baseball’s ultimate accolade but the Astros swept in with a late push and managed to take the series in Game Seven.

Plenty of Fantasy baseball fans will have been keeping tabs on both teams during the regular season and beyond, but there were a number of key players for other franchises who helped you guys to win the office championship. Here are a few of the biggest booms and busts from the 2017 season.

Travis Shaw, 3B, Milwaukee Brewers: While he didn’t rank as one of the very best in the business, Shaw turned out to be a real diamond in the rough for those astute enough to pick him up in Fantasy baseball. Left on the waiver wire in the majority of leagues, Shaw’s quick start to the season saw his stock rise quickly and he shone for the most part of the campaign; in fact he was named as the Brewers’ MVP for the campaign.

With 31 home runs and 101 RBI, he certainly proved his worth and the .273 batting average cemented his spot as a consistent option with real upside. Starring for Milwaukee is no picnic but Shaw made it look easy and he could be set for more success in 2018.

Clayton Kershaw, SP, Los Angeles Dodgers: As expected, Kershaw was one of the top scoring options in Fantasy last year and ESPN had him ranked as the best starting pitcher in the sport for 2017 – it would be difficult to argue against that viewpoint. After eaning a spot as an MLB All-Star in each of the last seven years, Kershaw was pivotal for the Dodgers in their pursuit of World Series glory.

He already has three and now he's a finalist for the 2017 N.L. Cy Young Award. Congratulations, @ClaytonKersh22! pic.twitter.com/kfJ0eap4PX

As of November 11, the Dodgers are a +550 chance in the latest MLB betting odds for 2018 and Kershaw will be central to their postseason aspirations once again. Another big year awaits if he can carry his recent efforts into the new campaign.

Wil Myers, 1B, San Diego Padres: Looking for a bust? Look no further than Myers. After an exciting breakout campaign in 2016, he failed to hit those heights in 2017 – eventually ending with sub par figures given the buzz surrounding him at the start of the campaign. He did hit a career high 30 home runs and upped his walk rate, but it was not enough to mask his inefficiencies with the bat.

Fewer runs, hits and steals with a lower batting average tell the story: it wasn’t good enough for Myers in 2017. In the field, he didn’t do a lot wrong as a first baseman but hardly performed at the level that many fantasy players expected. Does he deserve another chance in 2018? Of course, but we may have to alter our expectations of what his ceiling is.

Felix Hernandez, SP, Seattle Mariners: After a difficult 2016 campaign, most baseball fans expected Hernandez to struggle this year – and they were right. Hernandez ended the 2017 season with career lows in various categories and his spot on Seattle’s roster is in serious jeopardy. The Mariners still aren’t too sure how to best employ his skill set.

Pitching in just 16 games, the 31-year-old gave up 17 home runs. To put that into perspective, he allowed 19 in 25 starts in 2016 (see his highlights from last year in the video below) and 23 in 31 starts in 2015. In addition, Hernandez missed a significant chunk of the campaign thanks to injury and Seattle will be wary of more disappointment in 2018. Will he get another chance? Only time will tell.

Now it’s your turn. Let us know in the comments below who your booms and busts were for the 2017 MLB season.

By Simon Banks
Tags: MLB
This entry was posted on Monday, November 13th, 2017 at 11:42 am and is filed under BASEBALL, Busts, Simon Banks. You can follow any responses to this entry through the RSS 2.0 feed. Both comments and pings are currently closed.