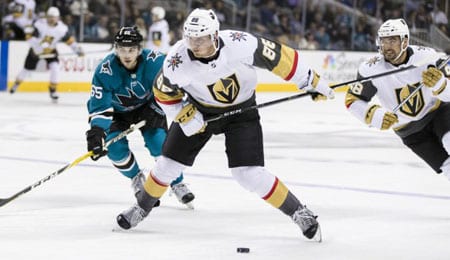 Welcome back to another week of Fantasy hockey waiver wire recommendations. We’re into November now, putting us nearly a sixth of the way through the season. Not quite time yet to fully assess your team, but deep enough into the campaign to have some idea of your strengths and weaknesses. And that’s what you need to focus on when seeking additions on the wire.

This week, the always outspoken Alex Ovechkin took it to another level with his new group Team Putin to support the Russian president; the Los Angeles Kings continued their hot start, remaining a darling on sites like NetBet Sport, as they have now scaled to the top of the Western Conference; and Michal Nuevirth stood on his head Thursday to lead the Flyers and their barely out of diapers defense corps to a shocking win in St. Louis.

Nate Schmidt, D, Vegas Golden Knights (ESPN: 12.1 per cent; CBS: 29 per cent): Despite seeing less PT last season, Schmidt started to develop his offensive game, enough so that Vegas decided to roll the dice on him in the expansion draft. That gamble has paid off handsomely for both sides as he’s responded nicely to massively increased ice time, especially in five-on-five situations. He’s always been able to move the puck well, but now Schmidt is seeing time on the power play, and with four assists over the last five games seems to taking the next step offensively. In fact, he’s doing everything in Vegas. And we mean everything (see video below). The former Capital clearly has a chip on his shoulder that he wasn’t protected, and Fantasy owners have a chance to reap the rewards.

Pavel Zacha, C, New Jersey Devils (ESPN: 2.7 per cent; CBS: 20 per cent): Other than a two-assist effort last week, Zacha hasn’t done much lately, and his PT has waned in recent games. But we believe he could be a deep league flier with Marcus Johansson currently dealing with a concussion. Zacha had a decent rookie season in 2016-17, experiencing a fair amount of success on the power play. There’s upside here, so it might be wise to stash him now and see how things play out over the next couple of weeks because we think it may pay off. The Devils are a team on the rise, and Zacha’s role is likely to expand as the season progresses.

Jay Beagle, C, Washington Capitals (ESPN: 0.7 per cent; CBS: 1 per cent): Beagle is deep league fodder only, but with a goal, two assists and a +2 rating over the last four games, the veteran is starting to make noise. Where he can really help you, though, is in leagues that track faceoff wins. Beagle is currently tied for second in the NHL with a 62.1 per cent success rate on draws, racking up 105 wins to date. He’s mostly known for his defensive play, but while he’s contributing a bit to the attack, he’s worth a look.

Lars Eller, C, Washington Capitals (ESPN: 0.9 per cent; CBS: 2 per cent): Eller is another Capital centre that specializes in faceoffs (currently tied for 45th in the league at over 52 per cent), but one that plays more and has greater more offensive skill. That was on display Thursday when he went off for two goals, an assist and a +3 rating, potting the game-winner as Washington edged the Isles. He’s a bottom six forward, so is likely just a deep league add, but he’s off to a nice start and on Thursday he even saw much more power play time than usual. Eller is in the early stages of a career season, so it might behoove you take a shot on him, especially in formats that reward faceoff prowess.

By RotoRob
Tags: Alex Ovechkin, Fantasy Hockey, Los Angeles Kings, Nate Schmidt, Russia, Team Putin, Vegas Golden Knights
This entry was posted on Friday, November 3rd, 2017 at 10:25 pm and is filed under HOCKEY, RotoRob, The Wire Troll. You can follow any responses to this entry through the RSS 2.0 feed. Both comments and pings are currently closed.