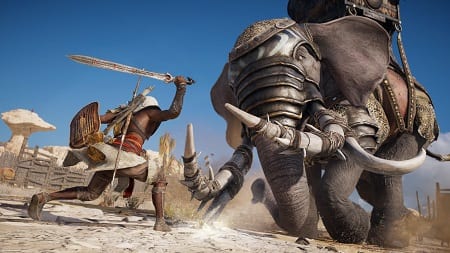 Origins is the most visually stunning Assassin’s Creed yet.

For whatever reason, Ubisoft decided to go with an annual release model for the Assassin’s Creed series. The result was a variety of settings and characters but only incremental gameplay improvements. By taking 2016 off to focus on development, the company is back with Assassin’s Creed: Origins, which takes a technical leap forward while focusing on the story of Bayek, the first Assassin — and it was well worth the wait.

By taking a year off, the Assassin’s Creed engine has been rebuilt from the ground up. As good as Syndicate was, it still inherited many of the problems that had plagued the series since the original 2007 release. There are two major control differences in addition to the general feel that Bayek moves much smoothly and is nimbler than his previous counterparts.

First, the combat is totally different. Every Assassin’s Creed game until now has featured some variation of strike/parry/counter. Origins completely overhauls this by using a fairly modern encounter system. By tapping in the right stick, Beyak locks onto a target. R1 is a standard attack, R2 attacks the opponent’s shield, and the face buttons are used for dodging rather than attack.

Combat is more fluid, though more haphazard; even though you’re locked into an opponent, you can still easily miss, and fighting without a lock is chaotic. It’s modernized for sure but still not perfect. Longtime fans will find themselves needing a few hours to get used to the new control scheme, even though it’s an improvement.

The second major difference comes from the cover/stealth system. Like combat, previous games all featured some variation on hiding while Unity was the first to offer a sticky cover system. Origins goes halfway, with a face button to get into crouch/stealth mode that adapts to cover but isn’t necessarily sticky.

This creates smoother movement (you’re not as prone to get stuck against something in frustration) but it makes corner kills and stealth takedowns a little bit harder because you can’t quite tell if/when guards see you.

Overall, the controls feel better, both in the new schemes and the general movement of Bayek. That was the biggest hurdle Origins had to overcome, and it’s successful, though there’s still room for improvement.

Simply put, Origins is a gorgeous game. It pushes the limits of this generation’s graphical fidelity despite the considerably vast landscape of Ancient Egypt. Lighting, water, character models, and more are all exquisite, and the draw distances are strikingly impressive, especially when flying around using Bayek’s eagle. Similarly, the animation has improved to smoother levels.

While there’s nothing particularly memorable about the music or voice acting, they support the story and the era without being obtrusive. Beyak’s revenge tale is performed with a straightforward approach (he’s a lot like original series hero Altaire) but it serves the story without jarring out of character.

In many ways, Assassin’s Creed: Origins feels like the game we were hoping for when the original title’s trailer was unveiled. So many of the series’ issues stemmed from its clunky control scheme, and even during its peak titles (AC2, Black Flag, Syndicate), there was still an element of wanting to rage quit because bad controls caught your character or carriage or horse on a corner. That has gone way down, though there’s still wonky AI and enemy detection.

With these issues largely being repaired, it’s possible to focus purely on the content of the game. And, well, it’s Assassin’s Creed. The world of Ancient Egypt is lovingly recreated and massive, meaning it’s chock full of the side stuff the series is known for. The game now employs a modern quest log and character upgrade scheme — something that was touched upon in Syndicate, though it’s far deeper here.

In addition to the usual murdering and stealthing, there are gladiator fights, chariot races (which handle better than previous titles), bounty hunter encounters, in-game clues and riddles, enemy strongholds, etc. (Note that the upcoming Discovery Tours of exploring Egypt haven’t been integrated yet.)

The game also clearly draws from modern open-world titles that have raised the bar, such as The Witcher 3 and Metal Gear Solid V. Day/night cycles are now part of your strategy, and Bayek’s trusty pet eagle flies high overhead to identify objects and enemies similar to Snake’s D-Dog.

Ranged weapons play a much bigger part, far beyond the crossbows, throwing knives, and clumsy guns seen in the last few games, adding a new dimension to planning infiltration and combat. Plus, you fight a ton of animals. Ever want to be chased by an angry crocodile? Now you can!

As for the core story, Bayek’s journey covers the dawn of the Assassin Brotherhood. Not surprisingly, this story is built upon revenge. Given Bayek’s stoic demeanour (his role at the start of the game is essentially like an Egyptian policeman), the game does give him some depth, and it has the advantage of a character that’s not born into the Brotherhood, so his morality is explored in a different way than most of the other characters.

This drives the main missions, and Bayek offers a grizzled-but-sarcastic perspective on things. He’s probably closest to Edward Kenway in terms of previous assassins; for us, he wasn’t as endearing as Ezio or Evie, but his journey will resonate as the foundation of the Assassin Brotherhood is created, especially for longtime series fans.

And without spoiling things, yes, there’s still a modern element dealing with Abstergo. The last few iterations have been somewhat light in this area, but Ubisoft has returned with a more in-depth story, one that twists and turns and features a protagonist who is fortunately more engaging than Desmond Miles.

Ubisoft made the right call by taking a year off from its flagship franchise. Though not perfect, Assassin’s Creed: Origins leaps over many of the hurdles that plagued the series for years while immersing the player in a visually stunning world.

By Mike Chen
Tags: Assassin's Creed Origins, Ubisoft
This entry was posted on Thursday, November 2nd, 2017 at 4:59 pm and is filed under Mike Chen, Video Game Reviews. You can follow any responses to this entry through the RSS 2.0 feed. Both comments and pings are currently closed.