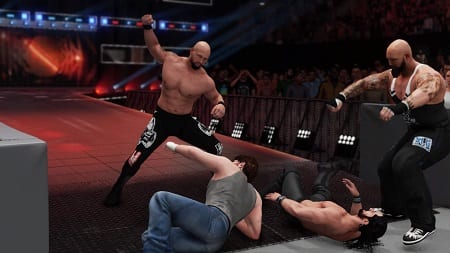 This is Year Five for 2kSports, having taken over the WWE license from THQ went it went belly up. It has enacted some significant changes to the franchise since then, but it made the unusual decision of paring back its offerings last year when it cut the cinematic 2k Showcase. Unfortunately, there’s no triumphant return this year as WWE 2k18 offers a very similar experience to its predecessor.

Little has changed from last year with a handful of minor changes — hot tags now happen within the regular framework of matches and you can carry opponents around to set them up for moves — so if you’ve never warmed to the counter-heavy play style of the WWE 2k series, there’s nothing new that’ll change that outlook.

Although it’s a small change, the ability to carry opponents is a solid addition. You no longer have to Irish whip them into the turnbuckle or toward the announcer’s table to set up a move, which is nice given how imprecise the latter was. It also opens up your move set a bit, allowing for some big tosses like power bombs over the top rope.

One item in dire need of improvement is the promo system. Introduced last year it has returned with minimal changes; it seems easier to follow your chosen attitude from start to finish, which results in a higher grade. It’s zero fun, however, with embarrassingly bad writing accompanied by wild flailing as the wrestlers pantomime their lines. It needs attention before next year.

That praise does come with a caveat. The MyPlayer backstage segments look like they were pulled from a last-gen title. Wrestlers just stand around, lifelessly staring at their phones, and your character moves as though he were knee deep in mud. Plus, somehow rendering this mess routinely destroys the frame rate. It’s inexplicable, especially considering the sizable load times.

Superstar entrance themes ring out loud and clear, but beyond that the audio is pretty underwhelming. Random songs play continually in the background of those backstage sections, and the load screens seem to reset tracks so you’re constantly hearing little bits and pieces.

Commentary has finally been updated with Jerry “The King” Lawler and JBL bowing out and being replaced by Corey Graves and Byron Saxton. Michael Cole remains on play by play. It’s not a whole lot better, which is disappointing given how good Graves is on Mondays and Tuesdays, and there are still too many times when the announcers are just completely off base with what they say.

As noted, the excellent 2k Showcase that anchored the publisher’s first three releases is missing for the second year in a row. Without it, MyPlayer is again left to serve as the main single-player mode. The biggest change is that you’ll now have access to the backstage area where you’ll interact with other wrestlers, agents and authority figures.

On paper adding a little open world element sounds alright, but in practice it’s agonizingly slow based on your plodding movement and frequent load times. It doesn’t help that there’s no voice acting, and most of the dialogue is downright brutal. For a game that marketed itself with the slogan “be like no one,” it seems like every wrestler speaks exactly the same.

As part of the career mode you’ll do the usual stuff: win titles, move up from NXT to Raw or Smackdown, engage in feuds, be a face or a heel and things of that nature. There’s no juice to the stories, however, and the game struggles to keep track of who you have issues with. Improving your wrestler also takes too long, leaving you and your mid-60s rating at a disadvantage in pretty much every match.

Perhaps the most maddening change is the introduction of loot crates. Now instead of allowing you to purchase the specific move sets, gear and other unlockables directly, you’re forced to spend your virtual currency on crates and hope the stuff you want comes out. It’s a decision made even stranger by the fact that, unlike NBA 2k18, the game doesn’t sell VC for real-world funds. So what’s the point?

One quality addition within the world of MyPlayer is the Road to Glory, which has you take your created wrestler online to do battle with other gamers’ CAWs. Performance is surprisingly tight most of the time as you complete challenges, upgrade your wrestler and earn those damnable loot crates. Do enough and you’ll earn a spot on the PPV card against a real WWE wrestler.

MyUniverse is back, allowing you to take the booking reins (not to be confused with Roman Reigns) to guide the company in any direction you see fit. It’s pretty much the same once again, getting a few new bells and whistles to streamline the process and make it easier to manage. The best of these charts the intensity of rivalries as well as burgeoning feuds.

It’s also worth noting that WWE 2k18 has a massive roster, bringing notable superstars from across multiple eras together to lock up. And if, by chance, you don’t see someone you want odds are the creation suite will have the tools there to correct said oversight.

Outside of graphical superiority, WWE 2k18 is largely indistinguishable from last year’s version. The core wrestling remains good, but the series would greatly benefit from some new ideas.

By HC Green
Tags: 2k Sports, THQ, Video Game Review, WWE, WWE 2k18
This entry was posted on Monday, October 23rd, 2017 at 3:27 am and is filed under Herija Green, Video Game Reviews, Wrestling. You can follow any responses to this entry through the RSS 2.0 feed. Both comments and pings are currently closed.