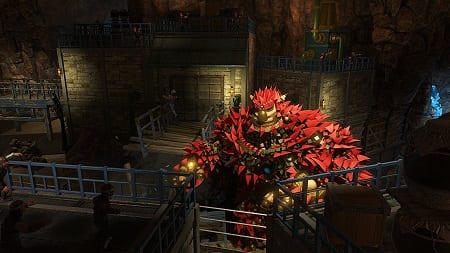 Knack’s back, bigger and better than before.

As a launch title for a new console, Knack checked all the boxes. It was an original IP, featured a possible mascot, was exclusively on the PlayStation 4 and used much of its new gadgetry (such as the speaker on the controller). Unfortunately, the game had significant, and often frustrating, issues. Now Sony tries its luck again with Knack 2, which hopes to build on the good and eliminate the bad.

One of the original’s biggest shortcomings was unresponsive controls. Thankfully, the sequel cleans most of that up. Punching, kicking and jumping covers the basics of what you’ll be doing, though within that you’ll unlock additional moves as you level up, allowing you to throw flurries, jump and smash down to the ground, grab enemies at a distance and more. It all feels much cleaner this time around.

Knack 2 also offers more options when it comes to your size as you’ll shrink down to fit into tight spaces and then recollect your parts to grow large. You’ll find yourself growing as you collect parts in each chapter as well, conveniently providing your current height next to your health meter. While taking hits reduces your size, you’ll automatically recollect those blocks if you can briefly avoid further damage.

Add it all up and Knack feels better equipped to handle enemies this time around. Sure, there can be frustrating moments — usually when fighting certain mixes of ranged and melee foes — but it’s night and day relative to the original when we often felt helpless to stop attacks.

Platforming is decent as well, though it falls prey to the same sort of problems that any game of its ilk with a fixed camera would. It’s sometimes hard to judge where you are relative to a platform even when watching Knack’s shadow, and there were more than a few fatal falls that seemed unwarranted. Still, the game rarely punishes you for such failures with quick reloads and frequent checkpoints.

While colourful and diverse in spots, the world of Knack 2 also feels very last-gen at times. This is particularly true in urban settings where you’re funneled through bland, narrow streets from one fight to the next. However, watching Knack shrink and grow by shedding or adding relics looks really cool, and the best areas manage to tap into that Uncharted sense of adventure.

There’s nothing bad about the game’s voice acting, but the characters are light on personality (more on that later) and give you nothing to invest in. Both the soundtrack and effects do a good job. That being said, we grew weary of the controller speaker’s use this time around.

Knack 2 begins with a city under siege as Knack and Lucas try to fend off an invading force of goblins and robots. It’s soon learned that machines from an ancient war between man and “high goblins,” a much more dangerous version of the current goblin remnants, are being reactivated, and it’s up to you and the cast of returning characters (Ryder, Dr. Vargas, etc.) to solve the mystery.

It’s a mostly familiar story. One that isn’t helped by the dull interactions between characters that, despite having been through extraordinary circumstances together, seem to have little to no relationship with one another. For all the cool and interesting abilities he has, Knack has the personality of a potato. He just risks everything to save everyone because of reasons unknown.

Stretched across 15 chapters that’ll take 10-plus hours to complete, Knack 2 transports you all over the world, checking off every expected destination type in the process. Many of these have environment-specific objects that Knack can use to imbue new powers, which is something we saw in the original.

Outside of Knack’s ability to change size, there’s little original to be found here. The platforming and puzzle solving both revolve around things you’ve done hundreds of times: push a block, redistribute weight to make a platform move, flip a switch and other genre staples. Everything is ably executed this time — in and of itself a step forward — but standout moments are few and far between.

Most of said moments come when Knack has grown massive and can rampage through the suddenly outmatched foes with ease. The developer’s did a good job metering out those instances so that they feel special and aren’t overused. The increased number of attacks at your disposal also helps stave off combat fatigue.

Although it’s quite enjoyable solo, Knack 2 is arguably more fun with a co-op partner. Rather than just using the same tactics with a second person tagging along, you gain access to completely unique moves that encourage interaction between you and your partner. If you have another person that’s interested by all means get them a controller.

Completing the campaign will unlock a new game along with a time attack mode. You can also replay any chapter to try to improve your score, and there is a suite of challenges to tackle. Again, it’s nothing new, but it extends the experience a bit.

Knack 2 is an improvement over the original in every meaningful way, and though it’s decidedly light on originality, its execution makes it a mostly enjoyable time.

By HC Green
Tags: Dr. Vargas, Knack, Knack 2, Lucas, PlayStation 4, Ryder, Sony, Video Game Review
This entry was posted on Friday, October 6th, 2017 at 2:58 am and is filed under Herija Green, Video Game Reviews. You can follow any responses to this entry through the RSS 2.0 feed. Both comments and pings are currently closed.