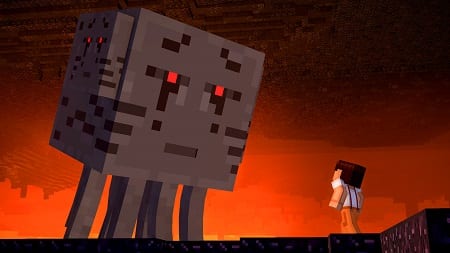 What the hell are you staring at!??!?

It’s clear that any additional escape attempts with require more planning, leaving Jesse and friends no choice but to cope with prison life for the time being. The Warden doesn’t make things easy, moving them deeper into the facility as punishment for their behaviour. He’s a decent addition, stepping in as Jesse’s primary foil with the Admin otherwise indisposed.

Before we move on, it’s worth noting that Jailhouse Block may be glitched in regard to identifying decisions you made in previous episodes. For one, Nurm, who’d stayed behind in Beacontown, is in jail with you while Lukas, who was with you at the end of Episode 2, never appeared. Also, Stella made reference to us making the opposite decision that we did. It was very odd.

Speaking of Stella, she and Lluna are back again, this time with the former serving as some sort of underboss for the Warden. While we’ve enjoyed Stella’s complete lack of self awareness over the first two episodes it starts to become a little more grating here. That’s unfortunate as she’d been one of the better additions to Season 2. Hopefully she rebounds over the final two episodes.

We do get to meet a new character that figures to be around for a while in the form of Xara, known for much of the episode as Prisoner X. She operates in a gray area that’s uncommon for a series in which the good and bad characters are clearly defined, and she offers more insight into the story of the Admin and perhaps holds the key to defeating him.

While there is a couple of lengthy action sections bookending Jailhouse Block, most of the episode is pretty slow with the party stuck inside the prison, which makes for a dull setting relative to many of the fantastic places we’ve visited in the past. And at around 90 minutes, it’s also the shortest episode thus far in Season 2.

Despite some uneven pacing, TellTale continues to show a deft touch for leaving you wanting more at the end of episodes, and the cliffhanger here has us ready for the penultimate entry.

Jailhouse Block isn’t as exhilarating as its predecessor, but the story takes some important steps forward and Xara emerges as the season’s most interesting addition.

By HC Green
Tags: Minecraft, Minecraft: Story Mode - Season Two Episode 3, Mojang, Telltale Games, Video Game Reviews
This entry was posted on Wednesday, September 27th, 2017 at 9:42 pm and is filed under Herija Green, Video Game Reviews. You can follow any responses to this entry through the RSS 2.0 feed. Both comments and pings are currently closed.