Video Game Review: Life is Strange: Before the Storm, Episode 1 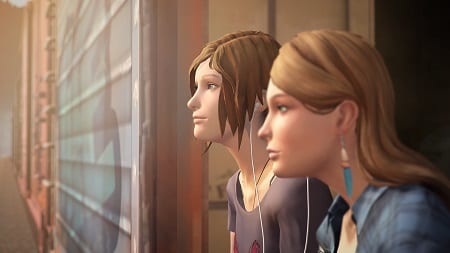 Before the Storm puts you in Chloe’s shoes years prior to the original.

Life is Strange was 2015’s cult breakout hit. A combination of teen angst, high school simulation and superpowers, the game was praised for its ability to blend story and beloved characters into a fairly tight narrative.

Before the Storm is a new prequel series made by a different development team, and while many people may have wondered why the series needed this, Awake — the first of the three-episode series — is smoothly executed and hits all the right notes.

Before the Storm controls nearly identically to the main series. The only difference really stems from the fact that while Max had the ability to reverse time, Chloe has no such powers. Instead, this is essentially a YA novel turned into interactive fiction.

Fans of the original game or TellTale games will find plenty familiar about the interface, and fortunately, there’s little precision requiring anything more robust.

All elements of Before the Storm look and sound like Life is Strange except for one crucial piece: cult favourite Chloe Price moves into the starring role of this prequel, but the voice actress has changed. This was a controversial move given how important Chloe is to the devout Life is Strange fandom (a change done because of a union strike).

Since this game primarily targets existing fans of the series, they’ll definitely notice, though this real-world move doesn’t necessarily take away from the game’s enjoyment.

Life is Strange originally centred on the premise that Max had the ability to reverse time. This played into puzzle solving and exploration. With Before the Storm, the game has a much more straightforward flow.

Set several years before the main game, Before the Storm‘s first episode focuses on Chloe and her newfound friendship with Rachel Amber — the girl whose disappearance drove the plot of the original game.

Chloe has no superpowers, but she does have her wits about her. In addition to exploring the main story, this allows Chloe to do things such as spray-paint objects and argue/insult to win over situations.

All of this is designed to get people into Chloe’s frame of mind as her home life falls apart and she struggles to find some stability in the form of Rachel. Players coming in cold will miss the significance of early-stage relationship development with Chloe’s family, and that could turn them off from the experience completely.

However, for those that know and love the character, the game effectively fills in many blanks and expands upon what we already knew about Chloe and Rachel. Given the series’ clear love of Twin Peaks, it’s easy to make Before the Storm an equivalent to that show’s prequel movie Fire Walk With Me (and indeed, there’s a reference to that early on in the episode).

At 3-to-4 hours, the episode actually spans a little longer than what’s typically expected for episodic narrative releases. The experience is lovingly detailed for existing fans, and though it starts out slow, even new players may be able to find themselves relating to Chloe’s situation.

Despite lacking the narrative draw of superpowers and missing persons like the original title, Before the Storm is its own rewarding adventure and hints at some of the bigger puzzles behind Arcadia Bay.

Before the Storm: Awake is a well-executed first part of Chloe’s trilogy. It may be a little hard for non-fans to jump in, but it’s a worthy entry into the interactive fiction genre and particularly powerful for those that love the original game.

By Mike Chen
Tags: Awake, Square Enix, Video Game Review
This entry was posted on Wednesday, September 6th, 2017 at 8:27 pm and is filed under Mike Chen, Video Game Reviews. You can follow any responses to this entry through the RSS 2.0 feed. Both comments and pings are currently closed.