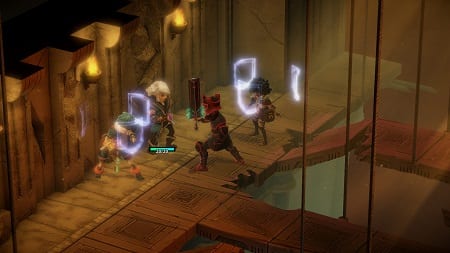 Children of Zodiarcs is a game that often feels like it’s attempting to be the brainchild of Final Fantasy Tactics and a board game. Supported by the Square-Enix Collective and actually one of the first titles to be published by it, does it have what it takes to stand up to that legacy?

Zodiarcs is a relatively simple turn-based tactics game, and it’s hard to screw up the controls in games like these. Picking and choosing where to go with your small armada and then choosing their cards and rolling the dice is nice and simple. Sometimes the camera can be a little annoying, especially if playing with a mouse, and so a controller is largely recommended even when playing on PC.

While the portrait art is quite good in Children of Zodiarcs, most other elements of its visual presentation leave something to be desired. Units are simple and too similar and animations are basic.

It’s hard to love a story intro to a mission when a character’s giant spiked club is clipping through the wall he’s standing by. Strategy RPGs have never been vaunted for their visuals, but issues were often hidden by charming 2D sprites for units rather than the ugly and blocky 3D ones presented here.

Things fare a bit better on the audio side. Music is suitably rousing and epic, though it sometimes feels like it is attempting to ape some of the classics a little too much. Sound effects are nice and crunchy, and the almost tactile feel provided by the dice rolls is a nice touch.

While the actual story of the game leaves a little to be desired, the characters end up shining. They’re a scrappy bunch quick to crack jokes and butt heads with each other, leading to distinct personalities and interesting conflicts.

Combat starts off similarly to most strategy RPGs, though in this game you’re limited to story-related characters rather than blank slate units you have full control over. Battlegrounds are small, and while this often works in the beginning, as your crew expands and enemies evolve on both the power and numbers scale, they can feel like a bit of a slog to get through.

Still, the times the game employs alternate ways to clear levels, like escaping, tend to be the highlight. In many other games in the genre, levels like that want players to leave for story reasons but rarely put on the pressure to do so. In Children of Zodiarcs, sticking around tends to mean certain defeat.

Moment-to-moment gameplay uses a handful of mechanics from board games. Dice are added to each action taken beyond movement, with effects ranging from additional damage to allowing an extra turn. There’s an option to re-roll two dice per turn, which is useful when players roll something that doesn’t affect the current action type, or worse, might hamper it.

All unit actions are played via a simple deck-building mechanic. While most characters will have a few basic attacks, it’s also possible with bad luck or poor planning to end up with four healing cards on your offensive powerhouse. Thankfully, there are enough ways to draw cards that this is a fairly remote scenario.

Progressing through the game will eventually allow things like dice crafting, which lets players tailor dice rolls a bit more to their playstyles. Cards are often upgraded with support abilities that can be triggered that might root an enemy in place or penetrate armour.

For instance, the lead character gets a card called Shroud, which puts them in a stealth-like state that improves the damage of their next attack or blocks the next one received. This is a nice little support ability when it is received, but over the course of the game more of her other cards will get unique triggers if used from Shroud status.

Children of Zodiarcs is a fairly linear and story-focused affair, though skirmishes are available to grind out some experience. They sadly tend to be bland with no real mix ups on encounter design, however, and seem only to take place to get some easy level ups. The game does get a little tough at times and a quick grind is needed, as most level ups give high stat boosts and fundamentally alter abilities.

Children of Zodiarcs is a surprisingly deep tactical affair, though the lack of polish can be distracting. Developers Cardboard Utopia could make real use out of an expanded budget and scope, something Square Enix ought to consider providing.

By Brian Gunn
Tags: Children of Zodiarcs, Final Fantasy Tactics, Square Enix, Video Game Reviews
This entry was posted on Friday, July 28th, 2017 at 10:04 pm and is filed under Brian Gunn, Video Game Reviews. You can follow any responses to this entry through the RSS 2.0 feed. Both comments and pings are currently closed.