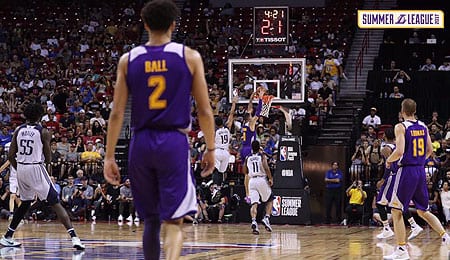 Another incredible Summer League season has come to a close and 2017 was the most watched event yet since it began 13 years ago. Exactly 127,483 satisfied basketball fans attended the record-breaking event, almost 19,000 more than last year’s record.

League founder Warren LeGarie was delighted with the success of this year’s competition and hailed the work of his organization.

“We have to work on it,” LeGarie said. “We always want to make something a little bit fresher, a little bit more exciting. Fortunately, it seems like it worked again.”

The Los Angeles Lakers defeated the Portland Trail Blazers 110-98 in the Las Vegas championship game at the Thomas and Mack Center. Ten thousand spectators came to watch the final and weren’t disappointed with the show the young stars of tomorrow put on for them.

Lonzo Ball from the Lakers was named MVP of the series after averaging 16.3 points, 9.3 assists and 7.7 boards. He also recorded 2.5 steals and a block per game from the six out of the eight contests he played during the event.

The young point guard was recently selected as the second overall pick in the 2017 NBA draft. There’s a lot of buzz circling around Ball and it’s easy to see why Los Angeles is excited about the club’s latest addition. Lonzo signed with the Lakers on a four-year rookie scale contract about three weeks ago, and he’s set to be a huge piece of the team’s rebuilding efforts.

The iconic team has not won a Championship since 2010 and they will be hoping a signing like Lonzo can start to help turn things around. However, they do have the formidable Golden State Warriors in their conference, and the bet365 NBA odds of +6000 to be the Western Champions for the Lakers suggest it may be another year of building before they are ready to truly challenge once again.

Ball could also be a good pick for this season’s Fantasy leagues, providing the price doesn’t go too crazy. He shot 73.2 per cent on two-pointers (yes, you read that right) and 41.2 per cent from beyond the arc in his freshman season, while picking up more than three times as many assists as turnovers. That kind of efficiency really stands out with Ball and he may be a bit of a wildcard for the upcoming league. His form (as you can see in the NBA 2K17 video below) is a bit unorthodox, but who can argue with those percentages?

Another one to watch out for is 6’8″, 208-pound Jayson Tatum, a small forward. The young Duke product was the third overall pick in the 2017 NBA Draft for the Boston Celtics. In his NBA Summer League debut game, Tatum had 21 points, seven rebounds, three assists and five steals in what was a very impressive display of basketball. He also hit a go-ahead jumper for the team with 5.7 seconds left on the clock.

Celtics’ coach Brad Stevens feels that Tatum is a versatile player who can handle the ball and play in multiple positions. Tatum could be another to keep on the radar when selecting your Fantasy team for next season.

Now it’s your turn. Let us know in the comments below which players caught your eye at the 2017 NBA Summer League.

By Simon Banks
Tags: Lonzo Ball, Los Angeles Lakers, NBA, NBA Summer League
This entry was posted on Friday, July 28th, 2017 at 4:08 pm and is filed under BASKETBALL, Prospects, Summer League. You can follow any responses to this entry through the RSS 2.0 feed. Both comments and pings are currently closed.