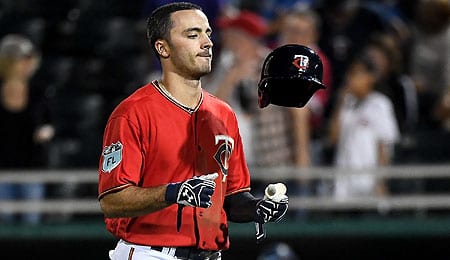 Zack Granite has been stellar in the field, but is looking to get his bat going. (m.startribune.com)

Welcome back to another week of Fantasy baseball. Yes, we’re coming off a short week, so there hasn’t been much activity to assess, but that doesn’t mean we don’t have a slew of picks for you!

This week, struggling Colorado got Ian Desmond back from the DL, but wound up losing Tyler Chatwood (calf); Cody Bellinger continues to establish himself as a stud, becoming the first Dodger rookie ever to hit for the cycle; and the Red Sox and Yankees keep playing ridiculously long, intense — and controversial — games.

And now, let’s get to this week’s Fantasy baseball waiver wire recommendations as the unofficial second half gets going in earnest…

Zack Granite, OF, Minnesota Twins (ESPN: NA: CBS: 3 per cent): Other than his double on Friday, Granite really hasn’t done much, but with Byron Buxton on the DL, Granite has a chance to… errr… cement himself in the Twin lineup, at least on a short-term basis. So from that perspective, Granite — the Twins’ 14th rounder in 2013 — is worth a shot. The rookie was piling up the runs while flashing some nice extra-base pop at Triple-A, and has some serious wheels. AL-only leaguers, pay close attention here. If nothing else, we’ll always have the web gem Granite delivered last week (see video below).

Alex Claudio, RP, Texas Rangers (ESPN: 3.2 per cent; CBS: 8 per cent): With saves on Friday and Saturday, has Claudio established himself as the closer in Texas? It doesn’t hurt that Keone Kela (shoulder) is still not ready to return to action, but it’s hard not to be impressed with the way Claudio has consistently lowered his ERA each season, despite slightly regressed control this year. Claudio has finally established himself as a big leaguer and looks ready for more responsibility.

Nick Franklin, 2B, Los Angeles Angels (ESPN: 0.1 per cent; CBS: 1 per cent): Danny Espinosa has been DFAed, leaving Franklin (with only Cliff Pennington as competition) as the man at the keystone corner in Disneyland. The Halos have struggled to get production out of second base this year, but of all the remaining options, Franklin has the best shot to deliver, even though he’s done next to nothing since becoming an Angel a couple of weeks ago. We really like the extra-base sock he flashed in Tampa Bay last year, and he was somewhat productive in the first half in Milwaukee, so this bears watching in a deep AL-only league.

Albert Almora Jr., OF, Chicago Cubs (ESPN: 1.6 per cent; CBS: 7 per cent): No, Almora doesn’t play every day, but given his recent performance, he could force his way into a bigger role in the second half. On Saturday, he hit a solo homer to start the scoring, and then had a two-out RBI single in the fourth to put the game away for the Cubs. That was Almora’s second straight multi-hit game — impressive for a part-time player. He’s seen more action this year, and although his extra-base pop hasn’t been as sweet, he’s improved his BA. If Almora keeps showing an improved stick, he will force Jon Jay to the bench and claim the centre field job as his own. Don’t forget that Almora was a top 75 prospect heading into this season.

Ruben Tejada, SS, Baltimore Orioles (ESPN: 0.1 per cent; CBS: unowned): Tejada is seeing the bulk of the action at short for the O’s while J.J. Hardy (wrist) is out, and he’s getting the job done lately, delivering a two-out RBI single Saturday after recording a massive game just before the All-Star break. Assuming B-More doesn’t make a move to shore up the position, Tejada is a decent AL-only league option for the next month or so.

Tommy Pham, OF, St. Louis Cardinals (ESPN: 35.6 per cent; CBS: 47 per cent): Pham is on fire right now, going 9-for-14 over the last four games with five runs, two doubles, a homer, three RBI, a walk and three steals. The Cardinals are missing both Stephen Piscotty and Randall Grichuk currently, leaving Pham as a great option for at least the next week or so.

Brent Suter, SP, Milwaukee Brewers (ESPN: 6.4 per cent; CBS: 29 per cent): Need someone for your rotation? Take a look at Suter, who hurled a second straight very impressive quality start in his last outing to secure his rotation spot with Chase Anderson (oblique) hurting. Suter has been much harder to hit this season, and is averaging nearly a K per inning. Give him a shot.

Sean Doolittle, RP, Washington Nationals (ESPN: 10.5 per cent; CBS: 21 per cent): Now that he’s been acquired by the Nats (a hot off the press trade), Doolittle should get another chance to earn saves.

Blake Treinen, RP, Oakland Athletics (ESPN: 1.4 per cent; CBS: 4 per cent): Speaking of guys that may get another shot to close, heading the other way in this trade is Treinen, a sinkerballer that enters a wide open situation in Oakland — the team that originally drafted him in 2011.

J.P. Crawford, SS, Philadelphia Phillies (ESPN: 1.2 per cent; CBS: 19 per cent): No, he’s not exactly tearing it up at Triple-A, but the No. 9 prospect in our Top 80 Prospects rankings is beginning to figure out the level this month and his overall game has shown modest improvement compared to last year.

Kurt Suzuki, C, Atlanta Braves (ESPN: 0.7 per cent: CBS: 2 per cent): In limited opportunities, Suzuki has been studly (.310 BA) with runners in scoring position. Small wonder this fiery catcher has been so productive in a part-time role, making him a nice addition in two-catcher formats.

By RotoRob
Tags: Colorado Rockies, Fantasy Baseball, Ian Desmond, Minnesota Twins, Zach Granite
This entry was posted on Sunday, July 16th, 2017 at 4:49 pm and is filed under BASEBALL, RotoRob, The Wire Troll. You can follow any responses to this entry through the RSS 2.0 feed. Both comments and pings are currently closed.