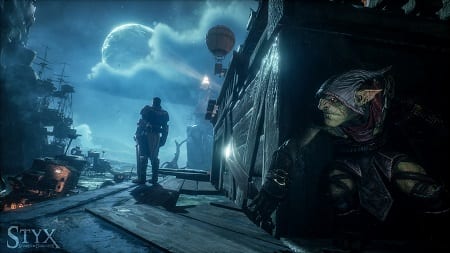 Focus Home Interactive’s original Styx: Master of Shadows offered an innovative take on stealth gameplay — namely, take the usual stealth formula but put it in a hard fantasy world with mostly melee combat and punishing detection. Unfortunately, it stumbled due to sloppy controls and questionable AI. Are these issues corrected enough in Styx: Shards of Darkness?

The original Styx blew its concept with difficult controls. In stealth, controls are absolutely essential, as one false move can lead to death. Fortunately, the development team has tightened many issues from the previous game. Styx simply feels crisper, and its movement is less floaty.

That is also accentuated with better collision detection and light/dark detection. It’s still problematic when it comes to climbing/dropping and maneuvering around edges; everything’s better but not so improved to the point that this type of problem from the original has been completely eliminated, which can be quite frustrating.

The team behind Styx has made good use of its time in terms of the game’s visuals. The new game is more detailed, more colourful and more varied in environments, with better lighting effects and just a plain better presentation. This doesn’t always translate to a good visual experience (camera angles are still an issue), but it’s mostly solid.

The snarky tone from the first game returns, with Deadpool-esque commentary and pop culture references. This can be a bit jarring if you’re just expecting a fantasy game, but it’s never the fault of the voice actors, who offer effective performances across the board. The music is nothing notable but fits the tone of the game and world.

The Dark Souls series is lauded for its exacting, punishing gamelplay. Styx tends to follow that strict formula, where stealth is essentially the only option. This is not like Assassin’s Creed or Metal Gear Solid in which you can muscle your way through; very rarely will prolonged fights do much for you, and the much-improved AI will find you more often than not.

Instead, Styx is about staying in the shadows, lingering behind objects, and using your tools to your advantage. This is handled through a number of options.

From a practical perspective, you can silently execute guards or create distractions such as throwing bottles. Amber vision, which is the equivalent to Assassin’s Creed‘s Eagle Vision or the Arkham series’ Detective Mode, is an upgradeable mode that highlights enemies, hand holds, and more, allowing you to plan your path forward.

Magic gives you a toolbox to play with: cloning, invisibility and other skills that help you power through the levels. Crafting has been added to the game, and the branching stealth abilities provide a level of replayability.

All of this is focused on the core stealth gameplay, which works really well in many of the smartly designed levels (though the developers did opt to recycle levels in the second half of the game). However, detection is extremely sensitive, and Styx is often overwhelming when a gang of guards are summoned — an issue that is unfortunately affected by the wonky camera system.

Unrelated but just as frustrating is the problematic climbing/dropping or sneaking around corners. It’s like the anti-Assassin’s Creed; while Ubisoft’s flagship franchise magnetically pulls you into hand/footholds too easily but trapped your movement on corners, Styx can make it damn near impossible to accurately swing from a rope onto a ledge.

A marked improvement over its predecessor, Styx: Shards of Darkness has fixed a number of technical issues to create a hardcore stealth game with Deadpool-style humour. That combination will only appeal to a certain group of people, but those intrigued will be rewarded if they can swallow the series’ technical hiccups.

By Mike Chen
Tags: Focus Home, Styx: Shards of Darkness, Video Game Review
This entry was posted on Wednesday, April 19th, 2017 at 4:54 pm and is filed under Mike Chen, Video Game Reviews. You can follow any responses to this entry through the RSS 2.0 feed. You can leave a response, or trackback from your own site.