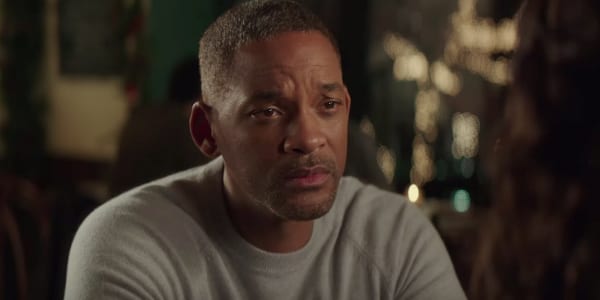 Get used to this expression.

Given the sheer amount of acting talent in Collateral Beauty, a 2016 drama from director David Frankel (The Devil Wears Prada), you’d figure the film would be solid at worst. Instead, writer Allan Loeb pens an emotionally manipulative and simultaneously preposterous story in which you’ll likely be ready for the credits long before they roll a scant 90 minutes in.

Howard Inlet (Will Smith) is on top of the world when the story begins, giving an impassioned speech to the folks at his burgeoning ad agency. Within moments, however, we’re sent a few years into the future when Howard has been decimated by the death of his young daughter. He no longer interacts with his fellow executives or staff, instead spending his time setting up elaborate walls of dominoes.

At this point, Howard’s absence is having a trickledown effect on the company, which was built in large on his personal relationships with clients. Fearing for their future and that of their employees, friends and partners Whit
(Edward Norton), Simon (Michael Pena) and Claire (Kate Winslet) hire a private investigator to track down proof Howard is unfit to run the company, thus allowing them to sell it to an interested party.

When the PI uncovers Howard is writing letters to Death, Time and Love, they enlist the help of a trio of struggling actors to manifest those concepts into actual people. The idea being that these visits will snap Howard out of his chronic depression and/or give them the proof they need that he should be relieved of his duties at the company.

When you’re talking about the likes of Helen Mirren, Winslet, Norton and so on you’re talking about true professionals with irrefutable acting chops. They take what they’re given and do their best with it, even though roughly 90 minutes of collective screen time doesn’t leave a lot of room for anyone to really stretch their wings. Mirren probably fares the best of the bunch, and she at least brings a little levity to an otherwise dreary slog.

If losing a child isn’t enough pain for one film to dish out, Pena’s character has a terminal illness and is trying to come to grips with leaving behind a wife and newborn child. Winslet has devoted her life to her career at the expense of a personal life and is now considering artificial insemination before her child baring years are at an end (if they aren’t already). More fun stuff.

Norton gets off rather lightly compared to his cohorts, dealing with a senile parent and a daughter that hates him for causing the divorce to his ex-wife — who, of course, has ended up with someone more successful and rich. So, for those keeping score at home we have death of a child, aging parent, being unable to have a child, divorce and dying young so you don’t see your child grow.

It’s all so transparently manipulative: are you sad? No? How about now? Now? What about now? What makes it even worse is the improbable nature of the story and artificial nature of the dialogue leave nothing to feel encouraged about. The film’s clumsy attempts at throwing a pair of late “curve balls” are generic at best. There’s no way you won’t see them coming a mile off.

Oh, and they introduce but never really explain the concept of “collateral beauty.” We guess it just sounded like a cool thing to say.

A single featurette has the cast and director trying to frame this as a “modern fable,” and talking up how there’s enough humour and whimsy in the script to offset the dark subject matter. Spoiler: there isn’t.

Overly contrived and heavy handed, Collateral Beauty simply isn’t enjoyable to watch. It’s amazing so many talented people were involved in its creation.

By HC Green
Tags: Blu-ray reviews, Collateral Beauty, Edward Norton, Helen Mirren, Kate Winslett, Will Smith
This entry was posted on Monday, March 20th, 2017 at 1:03 pm and is filed under Herija Green, Movie Reviews. You can follow any responses to this entry through the RSS 2.0 feed. You can skip to the end and leave a response. Pinging is currently not allowed.