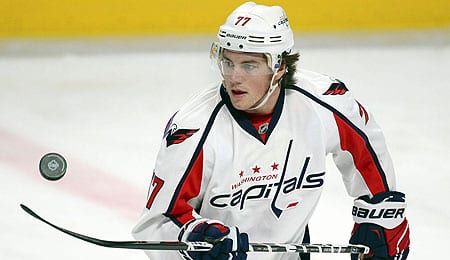 [Editor’s Note: We’re taking a break from the NHL Wire Troll this week, but will return next week. In the meantime, here is some Fantasy hockey content to appease you.]

Nicklas Backstrom, C: One of the reasons why the Capitals have been playing red hot hockey is because Backstrom has scored 10 points (3G-7A) over the last five games. His big game was on January 11 against the Pittsburgh Penguins, in which he scored a goal and three assists in a 5-2 victory. Even though in the past two games he has been a -4, Backstrom still averages 17 minutes of ice time, is the quarterback on the power play and is winning over 50 per cent of his faceoffs this season. Plus, he plays on a dynamite line that is nearly unstoppable (see video below).

Here are some other players who have stepped up their game and helped their Fantasy owners in recent days.

Brad Marchand, LW, Boston Bruins: Marchand had a 10-point stretch in the last week, including a two-assist game against the Detroit Red Wings, and a five-point game (2G-3A) last weekend at home against the Philadelphia Flyers. He’s up to 45 points this season, is averaging about 20 minutes of ice time, and in his last nine games, the winger has had three or more shots on goal in seven of those games, which means he’s getting plenty of chances to rack up the points.

Brent Burns, D, San Jose Sharks: The 31-year-old is coming off a week in which he scored three goals, one of them on the power play, and overall he’s averaging 25 minutes, making him one of the NHL leaders in ice time. In nine games this month, Burns has 12 points (4G-8A), is a +4, and is obviously going to be a key component for the Sharks in the second half of the season.

Vincent Trocheck, C, Florida Panthers: The 23-year-old has been on a roll. Trochek continues to average over 20 minutes, and his production has increased as a result. In the last week, he had two-point games against both the Islanders and Blue Jackets then, with the Panthers out west on a long road trip, he scored two goals on Wednesday against the Calgary Flames.

John Gibson, G, Anaheim Ducks: One of the reasons why the Ducks are in firstt place in the Pacific is because of Gibson’s play. In his last five starts, the goaltender is 4-0-1 with a GAA of 1.00 and has a save percentage of .965. Gibson picked up a shutout win over the Dallas Stars, a win over the Tampa Bay Lightning, in which he allowed a goal, and two wins over the lowly Colorado Avalanche in which he only allowed one goal in each.

Fantasy Hockey Recommendation of the Week

Danny DeKeyser, D, Detroit Red Wings: He’s been seeing tons of ice time in recent games, getting more shifts than any Red Wing on Sunday while playing over two minutes more of action than any of his teammates. DeKeyser is not putting up the offensive numbers he’s shown in the past, but given the bump in ice time this season, it’s reasonable to expect a big second half.

Now it’s your turn. Let us know in the comments below who has been carrying or burying your Fantasy hockey team lately.

By RotoRob
Tags: Nicklas Backstrom, Pittsburgh Penguins, T.J. Oshie, Washington Capitals
This entry was posted on Sunday, January 22nd, 2017 at 9:22 pm and is filed under David Weightman, HOCKEY. You can follow any responses to this entry through the RSS 2.0 feed. Both comments and pings are currently closed.