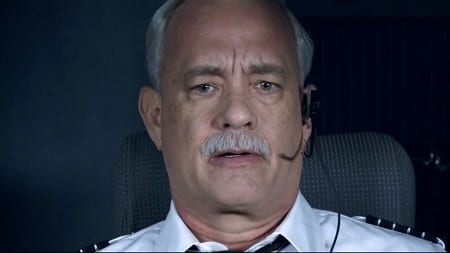 First Apollo 13, now this? Can’t he fly anything, right!?

Action star turned director is hardly an uncommon occurrence these days, but there’s little doubt that Clint Eastwood paved the way. While the one-time box office draw has appeared in just five films this century, most recently 2012’s Trouble with the Curve, he has directed more than a dozen, including several standouts like American Sniper and Letters from Iwo Jima.

This time Eastwood is paired with Hollywood heavyweight Tom Hanks for Sully, which is based on airline pilot Chesley Sullenberger safely landing an airplane on the Hudson River.

On January 15, 2009, US Airways Flight 1549 took off from LaGuardia Airport en route to Charlotte and almost immediately lost both of its engines following a bird strike. With no power, Captain Sullenberger and First Officer Jeff Skiles (Aaron Eckhart) turn around but could not return to a runway, forcing them to ditch the plane in the Hudson River.

Sully covers that event along with the aftermath, focusing largely on Sullenberger’s struggles with his newfound celebrity and second guessing from the National Transportation Safety Board (NTSB), which questions whether or not the plane could’ve been landed safely at LaGuardia.

Hanks is, without question, one of the finest actors in history. He does a great job of capturing the understated nature of Sullenberger, showing his post-crash struggles with whether or not he’d done the right thing coupled with concerns over what the NTSB may conclude. While his work here may not be on the level of Philadelphia or Saving Private Ryan, it’s arguably his best showing since Cast Away.

To his credit, Eastwood plays it very straight in his presentation of the events. There are no spectacular visual effects, no manufactured drama and no real antagonist — it’s played up a little that the NTSB is angling for finding fault with Sully’s handling of the situation, but it never crosses any lines where it’s implied it doesn’t appreciate his saving lives.

Brevity has never been Eastwood’s strong suit as a director. Of the 13 movies he made in the 2000s prior to Sully, only two checked in at less than two hours (Blood Work was 110 minutes, Gran Torino was 116). He resisted the urge here, however, tucking Sully away in a tidy 96 minutes. It was a smart move as despite the heroism involved, the incident on which the movie is based lasted only a few minutes.

Even at an hour and a half, Sully recycles its material, showing the entire crash sequence twice with slight variations in how it’s presented. Out of necessity the film then focuses on what happened after the crash, which includes Sully dreaming that he tried to take the plane back to the runway and ended up smashing into downtown New York City. There just isn’t a lot of content to deliver.

Speaking of that lack of content, the film can also feel kind of dull. That isn’t to be confused with uninteresting or poorly constructed, but minus any uncertainty with the actual event, which everyone is pretty well familiar with, there aren’t many traditional storytelling devices to rely on. Put it this way — most of the drama centres around unseen computer simulations of the flight.

Three lengthy extras are on offer, two of which focus on the actual historical events (one on the crash, one on Sullenberger) and one that covers the making of Sully. The breakdown of the crash from the people that lived through it is interesting, though the recreation of the event is the film itself. Hearing from pros like Hanks and Eastwood makes the behind the scenes featurette worth a watch.

Hanks and Eastwood do a fine job with Sully, a story that is equal parts inspirational and incredible. On the downside, however, they can’t manufacture the usual emotional investment that makes you want to watch a film again and again.

By HC Green
Tags: Apollo 13, Blu-ray reviews, Clint Eastwood, Sully, Tom Hanks
This entry was posted on Tuesday, December 20th, 2016 at 8:29 pm and is filed under Herija Green, Movie Reviews. You can follow any responses to this entry through the RSS 2.0 feed. Both comments and pings are currently closed.