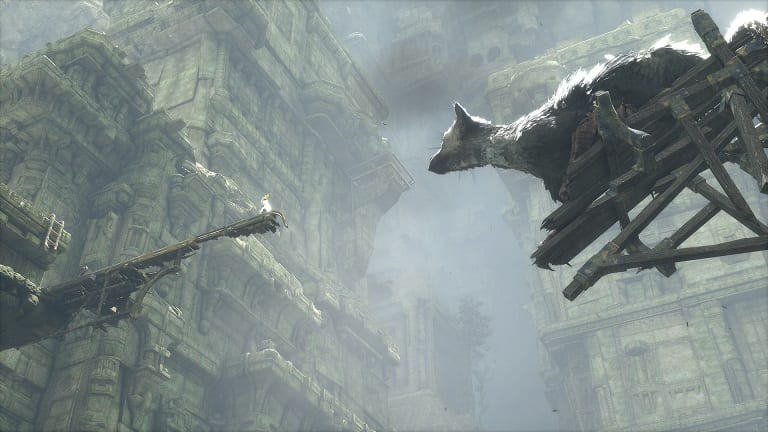 Now… you ARE going to catch me, right!?

When it comes to most anticipated games, The Last Guardian probably sat just behind Half-Life 3. That’s not a surprise since more than a decade had passed since Fumito Ueda’s classic Shadow of the Colossus, the follow up to 2001’s ICO, arrived to critical acclaim, and nine years since The Last Guardian entered development as a PlayStation 3 exclusive.

Well, the wait is finally over, and The Last Guardian has arrived on PlayStation 4. Now we are left to ask the most obvious of questions: was it worth the wait?

Despite a very small suite of basic actions — jump, climb, push, pull, etc. — The Last Guardian is one of the more unrefined experiences we’ve had in years. Nothing feels smooth, and considering the lengthy development cycle and game’s high profile it has to be a design choice to simulate the young boy’s relative helplessness in the world (ICO fans will spot the role reversal that essentially makes you Yorda).

Compared to your companion Trico, however, the boy is a breeze to handle. That’s because there’s no actual way to control the large griffon-like creature. Sure, you can call it, pet it soothingly or gesture wildly at something you’d like it to interact with (e.g., a ledge to jump to), but whether or not it actually acts on that is completely up to Trico… and that can be exasperating.

Even more maddening than Trico’s independence is a camera that simply can’t keep up even though you control it with the right stick. It routinely gets stuck behind objects, treating you to a close up of walls or Trico and completely obscuring what you’re attempting in the process. It’ll reset itself as well, and there are moments when the struggle to right the camera becomes almost dizzying.

Deliberate or not, the battles you’ll fight with Trico and the camera absolutely chip away at the things the game does well. That it doesn’t completely derail the experience is a testament to the areas in which it succeeds, but it’s impossible to deny it could’ve performed better, particularly the camera.

There are plenty of connections between The Last Guardian and Ueda’s previous titles, and the visual styling is front and centre. The massive structures you traverse are crumbling to dust, long abandoned as nature seeks to reclaim the land. Its scale is often breathtaking, leading to minutes spent looking around and simply soaking it all in.

And then there’s Trico. While other games have sought to create bonds between you and an A.I. companion, the best of them succeeded only in creating something that felt like an extension of you. Trico, on the other hand, feels like its own entity. The subtle movements and actions make it seem alive, so while its independence can stymie gameplay, it’s fascinating to watch.

To its immense credit, The Last Guardian keeps things understated on the musical side, allowing the world and the interaction between the boy and Trico to carry the emotional weight rather than beating you over the head with “now feel this way” chords. As such, huge sections of the game have little to no sound, and it’s all the better for it.

Although its narrative is thin on details, The Last Guardian proves compelling due to the developing relationship between the boy and Trico. In broad terms, the boy has been kidnapped and Trico has been locked up, and the two of them need one another to escape. It isn’t a great story in the traditional sense, but it succeeds in making you feel invested in what’s happening around you.

Most of your time is spent actively seeking a way out of the ruins you’re currently trapped in, usually via pulling levers or wedging the boy into areas Trico can’t follow and then finding a way to let it in. It isn’t an overly complex puzzler, but the wildcard in the equation is Trico, as it can act quickly and decisively or mill about pointlessly while you impatiently wait for it to spring into action.

Granted, it’s a byproduct of making Trico feel so lifelike, but the inability to issue clear commands that are followed in a timely fashion has repercussions — not the least of which is a sense of ambiguity due to the game blending viable paths forward with roads to nowhere. Minus the usual visual cues you’re often left to question yourself: am I trying to get Trico to do something it’s able to do or not?

If you’re seeking a silver lining for time spent wondering if/when Trico will take your direction it’s the quiet, reflective nature of the world. It’s that tone that makes those moments of impending danger, like encountering the game’s silent armoured sentries that seek to drag the boy off to some mysterious fate, all the more powerful.

The Last Guardian also continues to introduce new concepts and puzzle variants throughout, making one attempt to clear the stained-glass eyes that stop Trico in its tracks appreciably different from another. Some of the precarious moments spent teetering above would-be lethal falls also can lead to some sweaty palms.

For everything the game does right in relationship and world building, however, you’ll invariably circle back to its shortcomings surrounding the aforementioned camera issues and that nearly unparalleled sense of helplessness of waiting (and wondering) if/when Trico will do what you want to move the narrative forward to the next section.

It all creates a unique and uneven journey. One that will have you marveling at the world and smiling while Trico shakes water off its back one minute and cursing at Trico’s inability to complete what looks to be an obvious step in progressing the next. Your ability to reconcile that will ultimately determine how much you’ll enjoy the game.

While The Last Guardian isn’t the equal of Shadow of the Colossus, it still creates a fascinating world that’s worth fighting through the game’s issues to explore.

By HC Green
Tags: Half-Life 3, PlayStation 4, Sony, The Last Guardian, Video Game Review
This entry was posted on Monday, December 19th, 2016 at 6:33 pm and is filed under Herija Green, Video Game Reviews. You can follow any responses to this entry through the RSS 2.0 feed. Both comments and pings are currently closed.