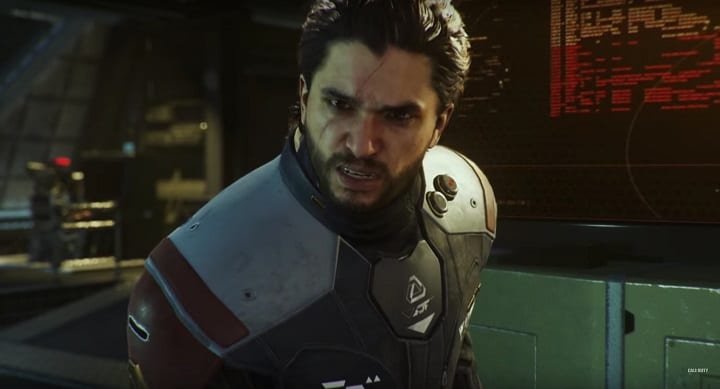 Guess the Lord of Light still needs him.

While there’s no denying Call of Duty’s popularity has slipped since its apex from 2010-12, last year’s Black Ops III was still the best-selling video game of 2015. This leads to competitors continually taking chances in an attempt to unseat the king while Activision is content to make tweaks around the margins and annually churn out a product that’s fundamentally the same.

It’s Infinity Ward’s turn this year with Infinite Warfare, the developer’s seventh installment and second full game since the 2010 shakeup that led to the creation of Respawn Entertainment. Interestingly enough, with Respawn unleashing Titanfall 2 mere weeks earlier, the pressure is on for Infinity Ward to deliver.

On foot, Infinite Warfare plays like pretty much every other recent Call of Duty game. That means crisp and responsive gunplay, augmented movement (e.g., jump packs and wall running) and plenty of fun secondary equipment like seeker grenades and wrist-mounted deployable shields. Some aspects of your move set, like the sprinting slide, are overpowered in multiplayer, but they all handle well.

Zero-gravity combat makes a return, and though the controls won’t trip you up, it’s often tough to locate where you’re being shot from, which is a problem on high difficulties. That same issue exists when engaging in dogfights. Again, actually flying the “jackals” is quite forgiving, allowing you to hover and not automatically blowing up your ship if you crash into something. It’s the ease with which you can get turned around in flight that’s annoying.

Making this issue stand out even more is that there’s no real tutorial for flying your ship, and the game actually dispenses valuable information about it after you’ve flown numerous missions. It’s fine as a change of pace, but more could’ve been done to improve the experience.

Relative to some of the other shooters that hit the market recently, Infinite Warfare isn’t particular impressive graphically. Its futuristic setting makes for some interesting visuals, however, such as when you crest mountains on Titan and are treated to an eye popping view of Saturn. Cut scenes, character models and animation sets are also effectively done.

Where the game does stumble relative to its competitors is in multiplayer. The themed map designs look alright, but the customizable rigs have a dated feel that’s especially noticeable during the post-match winner’s circle when the top three scorers awkwardly take turns posing.

In keeping with recent CoD tradition, the main villain is voiced by an A-list actor, in this case Game of Thrones’ Kit Harrington, who plays the warmongering Admiral Salen Kotch. Fans of Homeland or, more recently, The Night Manager, may recognize David Harewood as well. They all do a good job even as the dialogue they’re handed is uneven. Sound effects and score are typical CoD.

While the UNSA is able to quell the threat and beat back the SDF’s forces in space, casualties are heavy and Commander Nick Reyes (that’s you) is promoted to acting Captain of the Retribution, one of just two remaining UNSA ships. From there it’s up to you to defeat the SDF threat via a series of hit-and-run attacks for your suddenly outgunned faction.

There’s nothing exceptional about the story, which can’t fully commit to the inherent sci-fi roots, but the structure of the campaign at least mixes things up. In addition to primary missions, there’s also a series of optional secondary strikes to undertake. Some are entirely ship based, others require Zero-G combat, favour stealth and so on. It’s pretty tame, but at least they feature some of the game’s additions.

It’s a step in the right direction for sure after last year’s shout-filled mess, pounding a simple message from start to finish: war requires sacrifice, of yourself and of others, and if you can’t accept that you shouldn’t lead people. For Star Trek fans, it’s like Kirk resisting the Kobayashi Maru with Reyes refusing to believe in the existence a no-win scenario out there.

What has progressed very little from Black Ops III, however, is the multiplayer. In fact, in terms of fun, it feels like it has even taken a step back. Map design doesn’t seem to take advantage of your abilities to run along walls or soar high into the air. Walls you can traverse are always on the outer edge rather than up the middle, and buildings are never higher than two stories. It artificially limits the game’s unique aspects.

Sprinting and sliding around the map has also become far too prevalent. It’s basically the evolution of the old dolphin dive and is the kind of thing that should’ve been weeded out by now. Instead, it’s probably the most effective strategy out there. Infinity Ward made too many changes from Black Ops 2 to Ghosts. This time, it didn’t make enough.

Zombie mode has been brought over from Treyarch as well with positive results thanks to a setup that’s more welcoming to casual players. The 1980s theme park setting is goofy, it’s easier to find your way around, concepts are better explained, etc. We’re sure some will bristle at these concessions, but dialing back the mode’s ambiguous roots feels like a smart move.

Infinite Warfare might be the first Call of Duty in which the campaign overshadows the multiplayer. The story is easy to follow and the action is surprisingly varied. And, even with frustrating elements, multiplayer still provides hours of entertainment. Viewed as a whole, Infinite Warfare is a worthwhile purchase.

By HC Green
Tags: Activision, Black Ops III, Call of Duty, Infinite Warfare, Infinity Ward, Video Game Review
This entry was posted on Friday, November 18th, 2016 at 6:22 pm and is filed under Herija Green, Video Game Reviews. You can follow any responses to this entry through the RSS 2.0 feed. Both comments and pings are currently closed.