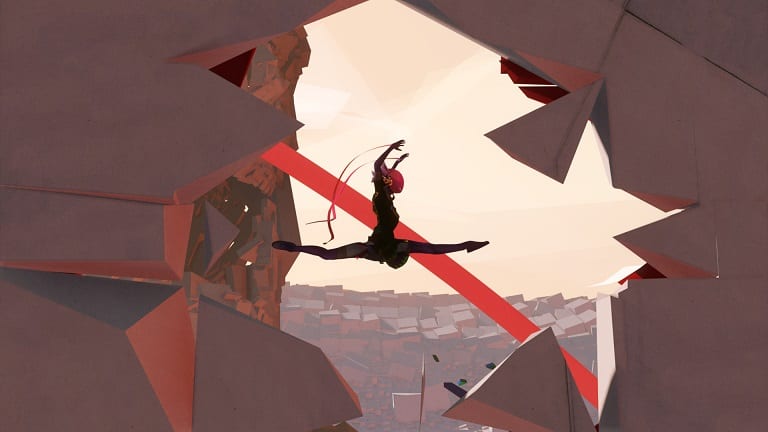 Sony’s four-game PlayStation PLAY 2016 promotion winds to a close this week with the release of Santa Monica Studios’ Bound. The developer has a rather lengthy history of unconventional titles that are more about the experience than the gameplay, and Bound definitely fits into that mold with a sombre story told through the use of exquisite movement and colour.

Thank you to Santa Monica Studio (Sony Interactive Entertainment) for providing the code.

Bound features fairly rudimentary gameplay, tasking you with following a linear path that never throws anything challenging in your way. In fact, were it not for the stylized movement your character does, it’d be lots of walking in a straight line accompanied by some light platforming that doesn’t punish you for falling to your death.

By having her gracefully prance across the world, however, it makes it stimulating to watch, and you’re free to spice things up by doing rolls, cartwheels and various dances. Performing the latter creates what looks like a ribbon force-field around you, preventing environmental hazards from slowing you down.

For as simple as all this is, however, it’s hampered throughout by one of the most schizophrenic cameras we’ve seen in a long time. Frequent battles with the camera are joined by numerous “cuts” where you’ll pass some invisible trigger point and suddenly you’re treated to an entirely new view, often requiring you to stop and readjust the camera. Sometimes the game won’t even allow that, locking you in to less-than-ideal points of view.

Presentation is where Bound does its best work, creating a truly surreal world that shifts and undulates as you dance across it. We’ve reviewed hundreds of games, and we can’t think of one that comes all that close to matching what’s offered up here — Bound is modern art mixed with ballet. Screenshots can’t really do it justice because you have to see the ground pulse and watch as countless tiny shapes pursue and engulf you. It’s a sight to behold.

There’s no traditional dialogue, with the inhabitants of the world communicating through a captioned jumble of sounds. The soundtrack is beautifully done by Oleg “Heinali” Shpudeiko, blending elements of ballet and acoustic music to bring some of the game’s underlying emotions bubbling to the surface. Even though it tells a story we don’t have personal experience with, the score still got to us.

Although all of the gameplay elements of Bound take place in a fantasy realm, the story is grounded in reality as a pregnant woman strolls along the beach, periodically stopping to examine a small notebook with what we presume are meant to be drawings from her childhood.

We won’t give away more than that, but the drawings themselves actually serve as your level selection screen, and you’ll rip out pages as you complete them. You’re free to tackle them in any order you’d like, and depending on how you do that things will play out differently. As such, the game does carry some replay value — a good thing since you can finish a trip through the world in around an hour.

As mentioned earlier, Bound features linear levels, but that shouldn’t be misconstrued to mean that there’s no sense of progression. The more you play, the more ably you’ll grasp your options in a given situation, so while gamers of any skill level can reach the end with little difficulty, there are ways to separate from the pack with speed runs (unlocked after initially completing the game).

It’d be easy to lump this “nongame” in with other sensory-based experiences (Journey, ABZÛ, Flower, etc.), but there’s one thing Bound lacks in relation to those others: cohesion. Everything in the world feels so foreign and abstract that it never resonated with us in the same way, and it seems like an odd decision to stack its release so close to that of ABZÛ because we felt we just played a more focused take on the “games as art” phenomenon.

Presentation wise, Bound is a treat. Its colour and sense of movement are unique, and it’s the kind of thing you could show to non-gamers as something of a conversation piece. At the same time, the fickle camera and lack of continuity detract from the experience as a whole.

By HC Green
Tags: Bound, PlayStation PLAY 2016, Santa Monica Studios, Sony, Video Game Review
This entry was posted on Thursday, August 18th, 2016 at 3:26 am and is filed under Herija Green, Video Game Reviews. You can follow any responses to this entry through the RSS 2.0 feed. Both comments and pings are currently closed.