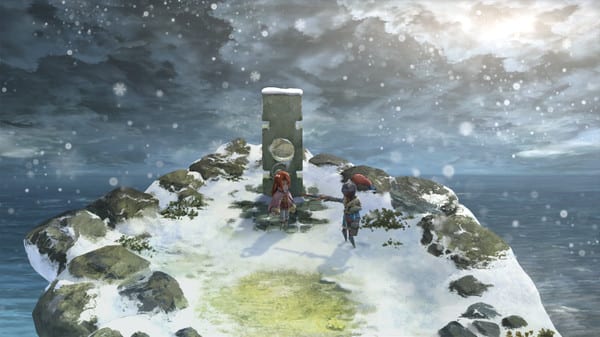 With all due respect to modern RPGs, the golden age of the genre was when Squaresoft was actively bombarding gamers with the likes of Final Fantasy VII, Chrono Trigger, Secret of Mana, Vagrant Story, Xenogears and so on. Square-Enix is still publishing RPGs, but there has been a clear shift toward more action-oriented gameplay in recent years.

Here to buck that trend is developer Tokyo RPG Factory’s I Am Setsuna, an unabashed throwback to those early Final Fantasy and Chrono Trigger titles. Does it recapture that old-school magic, or does it reinforce the notion that style’s time has come and gone? Thankfully, it’s the former.

Employing the tried-and-true Active Time Battle (ATB) System, most of the action is implemented through a streamlined series of menus. As such, the core gameplay handles just fine by pausing the action while you select what you’d like to do with your turn.

About the only unique element is a momentum meter that builds when you attack or don’t bring up the menu when it’s your turn — time keeps advancing if you don’t select a character to act. Once it fills you earn a boost. To use this you’ll need to tap square at a specific point after choosing your action. It’s straightforward, but properly timing it can feel inconsistent.

Our lone complaint is that traveling across the overworld feels really slow on foot. This would make some sense if your party was in danger, but since there are no random encounters all you’re doing is moving from Point A to Point B. So why make it take longer than it needs to? Also, the game would’ve benefitted from a map, especially once the world truly opens up.

Initially, it’s easy to love the snow-filled world of I Am Setsuna. Once it becomes apparent that there are no other climates, however, it eventually feels repetitive. Enemies fall under that same banner with a lot of colour palette swapping on a fairly lean number of unique types — an issue that leads to cheap deaths if you fail to recognize the rare (read: much harder) versions of foes before engaging. Spell and combo effects look good.

Get ready for piano music… lots of piano music. The game features a very subdued score, recycling a lot of the same riffs and ultimately falling well short of classic JRPGs of the past. All dialogue is delivered via text boxes while battle chatter is exclusively in Japanese. While not a bad effort, the audio suite turns out to be a fairly bland affair.

Despite the title, you are, in fact, not Setsuna. You’re Endir, a mercenary tasked with assassinating Setsuna, a mission that you’re either unwilling or unable to complete. We’ll never know which as your meeting is interrupted by Aeterna, who uses powerful magic to bind you. Rather than keep you locked up, however, Setsuna asks you to accompany them on a quest.

That quest is to protect Setsuna on her pilgrimage to the Last Lands. Once there, Setsuna will sacrifice herself to appease the demons and temporarily halt their attacks throughout the land. As you progress you’ll recruit additional guardians, growing your party of selectable heroes, all while battling monsters and those that want to stop the ritual from taking place.

If that sounds simple, it’s because it is… and it isn’t. I Am Setsuna toes the line between making itself accessible to newcomers and offering depth to veterans. You can absolutely finish the game by sticking to the core concepts (attacking, healing, targeting weaknesses), but there’s additional layers of complexity in the “Momentum” and “Flux” systems.

Unfortunately, the game does a pretty terrible job of explaining them, particularly the latter. Even after reading online tutorials it’s a bit hazy, but the broad strokes are that by using momentum-based attacks you can imbue your Spritnite stones with added effects based on the talisman you have equipped, thus making your magic more potent.

There’s also a valuable combo system based on what configuration of characters is in your party and what Spritnite they have equipped. The game shows available combos based on your current group in the selection screen, but once again it fails to adequately explain that aspect of the combat.

Even with its most interesting elements shrouded in ambiguity,I Am Setsuna is eminently beatable thanks to its forgiving difficulty. Most common mobs offer little resistance to your party, particularly if you engage without being spotted as this gives you initiative and a full momentum bar, though it can leave you ill prepared for some bosses that create high difficulty spikes.

Despite some shortcomings, we constantly felt the pull to continue playing until we’d finished the 20-plus-hour story. And even then, there’s still a draw to track down all the rare Spritnite-eaten foes and clear the various Ruins that provide some of the game’s biggest challenges.

While I Am Setsuna isn’t destined to join the true heavyweights of the genre, it delivers a nostalgia-filled romp that features a strong narrative, likeable characters and fun combat. Old-school RPG fans should find this to be well worth their time.

By HC Green
Tags: I Am Setsuna, RPGs, Video Game Reviews
This entry was posted on Tuesday, August 2nd, 2016 at 1:23 am and is filed under Herija Green, Video Game Reviews. You can follow any responses to this entry through the RSS 2.0 feed. Both comments and pings are currently closed.