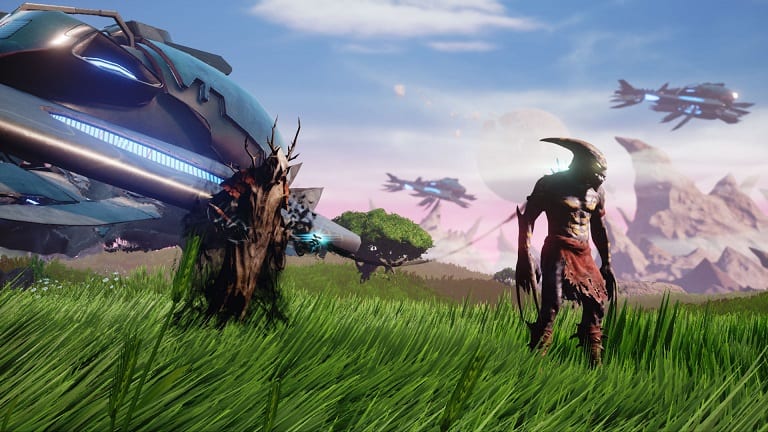 Even distant worlds have leash laws.

Originally released back in 1989, Shadow of the Beast has been updated/rebooted exclusively for the PlayStation 4. The game looks to harness old-school sensibilities and modernize them, at least to an extent, to create a hybrid that features combat, platforming and exploration. What it provides is a bit of mixed bag, and one that will likely prove divisive for modern gamers.

There is a learning curve associated with Shadow of the Beast, even though it may initially look like a standard hack n’ slash affair. Combat requires timing and on-the-fly tactics to prevent your character from being overrun by enemies that attack from both sides.

In terms of basics you have three attacks: standard, stun and grab. You can also essentially sidestep an opponent so that you end up behind them (critical against foes that carry shields), block incoming blows and also counter or parry them. Once you get the hang of things it becomes pretty effective, but like many timing-based games if you lose the rhythm in battle it’s difficult to reacquire it — and that means potentially taking a lot of damage.

There are also a few special moves at your disposal. By holding down R2 and pairing it with face buttons you can boost your score, regain health and more, all at the cost of a section of your blood meter. The meter is broken into three sections, and you refill it by killing enemies. Tapping the touch pad unleashes the “Wrath of Aarbron,” which summons spikes from the ground to strike a large swath of foes.

Platforming doesn’t fare as well, however, as there’s an undeniable clumsiness to scaling walls and jumping over gaps. Some of the problem is in the character animation, as Aarbron just doesn’t travel as far as it feels like he should. The other part of the problem is design oriented as grabbing onto a wall requires a second press of the “X” button. It never stops feeling awkward.

Major kudos to whoever designed the titular “beast,” as Aarbron looks like a bad ass. Most of the game’s seven stages are visually interesting as well, particularly the outside ones — the Hydrath’s Castle features a darkened interior that suffocates the art style, and unfortunately it’s by far the lengthiest level. Enemy variety and design are solid, but the game can get a little too busy, which ends up blending foreground and background for some cheap hits.

While no actual languages are spoken during the game, occasionally enemies will belt out a few words, though you’ll need to acquire items for it to be translated into subtitles. Music and sound effects are decent enough but won’t stick with you.

You are Aarbron, a man that was kidnapped as a child and then turned into a demonic creature that does the bidding of Maletoth. While in his service you cut down a number of human warriors before laying waste to some sort of monastery. When one of the monks touches you, however, the memory of your abduction comes flooding back and you’re able to break free of Maletoth’s clutches. From there, it all boils down to one thing — vengeance.

While the game features both platforming and combat, the latter is the draw. The game breaks up its first six levels into a series of fights, each of which is graded on two factors: how many points you rack up and how many hits you take. Those two elements are then added together to get an overall medal for a given battle.

It’s a tried-and-true setup, allowing less skilled players to advance while also creating some incentive for improvement. To maximize your score you’ll need to keep your multiplier up and time your strikes well, and at the same time keep enemies from landing blows on you. Earning top marks will get you a potion that can resurrect Aarbron if you’re defeated.

At the end of each level all your points will be totaled, and those can then be spent to upgrade your health and combat abilities, activate talismans you’ve found for passive buffs, and pick up other extras like translating enemy speech and unlocking the 1989 version of the game.

Shadow of the Beast does several things well, but it also struggles at various points. Platforming always comes across as clunky, and it’s one time when nostalgia should’ve been swept aside in favour of modern convenience. Boss battles are underwhelming, and being able to focus on a single foe, rather than trying to balance attacks coming from both sides, makes them easier than many standard fights.

There’s also a fairly lean serving of content with seven levels, two of which are very brief, covering little more than an hour. Clearly, the aim is to have you go back to improve your score and track down all the hidden goodies, but even with that it doesn’t feel like something built for the long run — nor does it make for the kind of memorable experience that nullifies the issue of length.

With its occasionally archaic feel, Shadow of the Beast won’t be for everyone. However, those searching for some deceptively skill-based combat should enjoy it.

By HC Green
Tags: Aarbron, PlayStation 4, Shadow of the Beast, Sony, Video Game Review
This entry was posted on Tuesday, June 21st, 2016 at 5:16 pm and is filed under Herija Green, Video Game Reviews. You can follow any responses to this entry through the RSS 2.0 feed. Both comments and pings are currently closed.