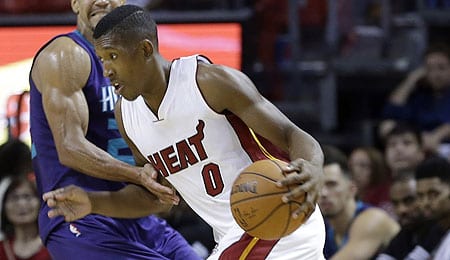 Josh Richardson is filling it up from downtown. (Alan Diaz/AP)

This week, the Milwaukee Bucks’ projected new arena design was claimed to look like a beer barrel (psh — who doesn’t like beer anyways?); The Celtics are seemingly the favourite to acquire Kevin Durant upon his free agency (luck of the Irish?); and Raptor big man Bismack Biyombo set a franchise record with a 25-rebound game.

At this point, most of you Fantasy players have entered your first week of league playoffs; so here’s some waiver recommendations that might keep your team well equipped…

Josh Richardson, SG, Miami Heat (ESPN: 10 per cent; CBS: 12 per cent): Richardson has been lighting it up from the perimeter over the last four games. Beyond his outside game, Richardson showed signs of stat-stuffing potential against Denver Monday with 17 points, four boards, three blocks, two assists and a pair of steals. The Heat seem to be a breeding ground for young Fantasy apprentices, and Richardson is next up. And check out
his hustle in the video below.

Tony Allen, SG, Memphis Grizzlies (ESPN: 22.7 per cent; CBS: 32 per cent): The 34-year-old vet isn’t showing any signs of age. In fact, Allen is having his most productive month of the season. With all the challenges in the Grizzlies’ roster, he has put up decent scoring numbers and is racking at least a pair of steals per game. Allen is worth owning in deep leagues just for his steals alone.

Hollis Thompson, SF/SG, Philadelphia 76ers (ESPN: 9.4 per cent; CBS: 18 per cent): Thompson has been a steady scorer with at least 10 points in each of his last three contests. He has the ability to pull down some decent rebound totals along the scoring efforts. Keep an eye on this kid in hopes that his production goes up as much as his minutes.

Joe Ingles, SF/PF, Utah Jazz (ESPN: 0.5 per cent; CBS: 1 per cent): If Ingles’ call to a starting role isn’t enough to raise eyebrows or Fantasy curiosity, perhaps his crazy six-steal performance in a victory over the Suns is. He “stole the show” — literally — and also put up 15 points, four boards and two assists. It’s unclear what Ingles might continue to do in place of teammate Gordon Hayward (foot), but if you have nothing to lose and all to gain, you might want to shake your “Ingle bells” on this guy.

Kelly Olynyk, Boston Celtics (ESPN: 7.5 per cent; CBS: 37 per cent): Olynyk returned from a 12-game absence on Wednesday against the Thunder. Though it’s been a slow progression for him so far, don’t count him out just yet. Olynyk will get plenty of time to redeem himself in the heavy Boston frontcourt rotation, as he’s capable of putting up good production in a modest amount of time.

John Henson, PF/C, Milwaukee Bucks (ESPN: 3.3 per cent; CBS: 18 per cent): Henson is clearly being eased back into the swings of things slowly but surely based on the low minute totals in his first two games back since late January. However, teammate Miles Plumlee might eventually lose out to Henson as Henson looks to redefine himself as a block specialist (he notched four Thursday). If you’re in strict need of rim protection, Henson might be worth the stretch.

By Adrian Wallace
Tags: Bismack Biyombo, Gordon Hayward, Josh Richardson, Kevin Durant, Miami Heat, Miles Plumlee
This entry was posted on Saturday, March 19th, 2016 at 9:39 pm and is filed under Adrian Wallace, BASKETBALL, The Wire Troll. You can follow any responses to this entry through the RSS 2.0 feed. Both comments and pings are currently closed.