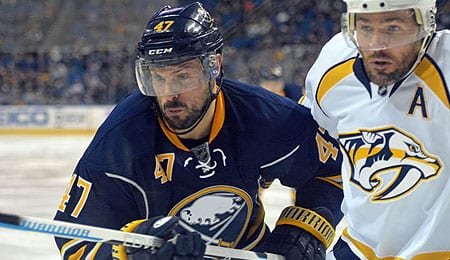 We’re getting down to the last lap of the season. This week’s waiver wire recommendations should hopefully take you to the finish line with style.

Zach Bogosian, D, Buffalo Sabres (ESPN: 44 per cent; CBS: 18 per cent): The Sabres may still be a few years away from postseason contention, but that doesn’t mean there aren’t valuable Fantasy contributors in Buffalo. One of the best may be on their blue line in the form of Bogosian.

The former Atlanta Thrashers/Winnipeg Jets rear guard has logged heavy minutes this season with an average ice-time of 22:23. He’s no Ryan Suter, but definitely has been the backbone of the Sabres defense. In his past eight games, Bogosian has a goal, six points, a plus-5 rating, eight penalty minutes, 25 shots on goal, six hits and 12 blocked shots, making him a valuable contributor in almost every skater Fantasy stat category. He has four goals, 18 points, a minus-15 rating, 46 penalty minutes (check out the video below for an example of how feisty he can be) and 95 shots on goal in 52 games played this season.

Sam Reinhart, C/RW, Buffalo Sabres (ESPN: 7.7 per cent; CBS: 41 per cent): Prior to this season, the last time two Sabres rookies hit the 30-point mark in a season was when Thomas Vanek and Jason Pominville did it in 2005-06. Together, Reinhart and Jack Eichel — both taken second overall in their respective draft classes — have combined for 39 goals and 79 points this season. Reinhart can account for 19 and 33, respectively. The 2014 pick has a goal, six points, 14 shots on goal, two hits and seven blocks in his past eight games.

Alex Tanguay, LW, Arizona Coyotes (ESPN: 7.8 per cent; CBS: 22 per cent): The move to Arizona has been a positive one for Tanguay, who has three goals, six points, a plus-4 rating, four penalty minutes, six shots on goal, four hits and six blocked shots in his past five games. The aging vet has six goals, 27 points, a plus-6 rating and 52 shots on goal in 56 games between Arizona and the Colorado Avalanche this season.

Philipp Grubauer, G, Washington Capitals (ESPN: 12 per cent; CBS: 13 per cent): Braden Holtby may be Washington’s leading man, but his backup isn’t too bad, either. In 17 games played, Grubauer has an 8-5-1 record, a 2.02 goals against average and a .930 save percentage, giving the Caps a serious case for having not only the league’s best goaltender, but the best goaltending tandem as well. He doesn’t see a lot of time, but may be the perfect ace in the hole as your third string Fantasy goalie.

Fantasy Tip of the Week: Edmonton centre Ryan Nugent-Hopkins (hand) has been activated off the Injured Reserve list. If he’s available on your league’s waiver wire, snatch him up. Nugent-Hopkins returns to an All-Star cast of forwards that have started surging in recent games. With Connor McDavid, Jordan Eberle and Nail Yakupov healthy, expect an increase in production from RNH.

By Dakota Case
Tags: Zach Bogosion
This entry was posted on Sunday, March 13th, 2016 at 9:27 am and is filed under Dakota Case, HOCKEY, The Wire Troll. You can follow any responses to this entry through the RSS 2.0 feed. Both comments and pings are currently closed.