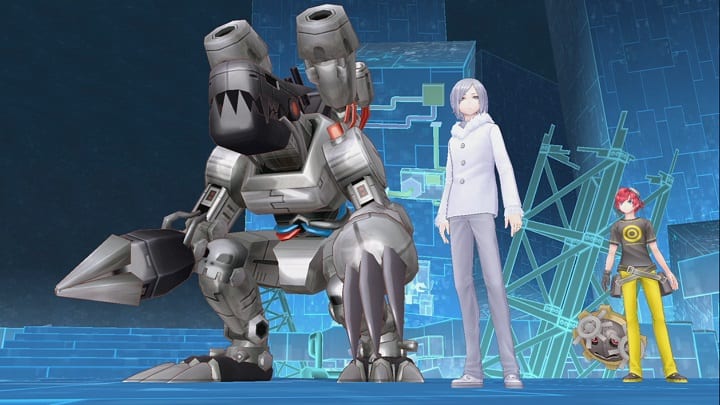 Giant robot guy dares you to make a Pokémon joke.

As a series, Digimon holds a tenuous relationship with the West. Brought over to compete with the popularity of Pokémon, Digimon eventually faded away with only hardcore fans keeping up with it. Digimon Story: Cyber Sleuth is one of the few recent forays outside Japan, and it was brought over in part thanks to a passionate petition.

Cyber Sleuth is a fairly traditional turn-based RPG, and it controls like one. Everything is menu based and generally functional, though it is perhaps a bit heavy on the menus in general. A few functions seem like they could have been combined in order to not have to dig around so much. Dungeon traversal is adequate, with a locked camera that gets a little annoying at times when you might want a better picture of a path.

As far as monster collecting games go, Digimon Story: Cyber Sleuth is probably the best-looking game in the genre yet. The general character art recalls the cartoons, while the digital spaces are predictably Tron-esque and real world locations feel authentic enough. There is a price to be paid for these visuals however, in that areas are often small and the cyberspace dungeons are especially repetitive and bland.

Given Digimon stands for digital monster and you’re fighting in cyberspace, it is no surprise that the soundtrack is heavy on electronic music. A catchy battle theme takes centre stage, though a bit more variety wouldn’t have hurt. Voice acting is all in Japanese, though only some of the main story sections are actually voiced. Sound effects are handled well, from the roars of monster fights to the sleek futuristic UI.

Like with many JRPGs these days, you start as a relatively normal teenager hanging out with some friends. The difference here is that the silent protagonist is hanging out in a virtual world, specifically an area known for hackers.

After a too-long introductory sequence, players finds themselves in a strange limbo between the digital and real worlds. Avatars can go freely between the real and computer worlds, while the body has become trapped in a mysterious coma. Oh, and there’s also some stuff about collecting Digimon in there.

That convoluted introduction aside, once the story is set up it starts to proceed fairly normally. Because of the unique ability to jump in and out of the digital world at will, it makes the main character highly qualified for sneaking around where people aren’t wanted.

A mysterious detective quickly snaps the player up and makes them her assistant, and that framework sets up most of the story, helping out people with their cases that somehow all end up involving Digimon (what are the odds!?).

With the huge roster of monsters and constantly switching them, it actually ends up feeling more like something more similar to the Shin Megami Tensei series than it does to Pokémon.

Weaknesses and strengths are based upon the tried-and-true triangle method seen in countless RPGs. There are three different ones, the most basic being the water, fire and plant. There’s also one that involves the type of Digimon fighting — each belongs to the Virus, Data or Vaccine groups, and these also work with the elemental weaknesses.

So while a water element against fire will get a damage boost, players can also combine exploiting the type of triangle to increase the bonus even further, or reduce damage from elements that are normally a problem. This leads to a lot more strategic viability, though in some early battles it can be easy to get creamed by something one of your stable is particularly weak to before having a chance to do anything.

There are dozens of Digimon to choose from, and it can be fairly difficult to keep track of them, especially as the game has players evolving them frequently. New monsters are only yours to use after fighting them several times or by using evolution, which can be a bit of a slog. A huge collection will quickly be in hand though, and the relatively fast leveling system will let players switch things up quickly.

Unfortunately, quests are a little on the dull side. While the concept of the story should allow for cool possibilities, many quests are just linear trudges. Dungeons are fairly similar in design, and the game will force many repeat journeys to previously conquered areas. Meanwhile, the main story has its moments, though it can be a bit of a tonal whiplash.

For instance, an early main story quest involves helping a young woman go rescue some Digimon because they are so cute. Then when she’s quickly stopped by some hackers who want her account, she assumes they want to sexually assault her, despite the event taking place in cyberspace. This is sort of representative of the franchise as a whole, which has attempted to grow up with its audience, to mixed results, and mainly through fairly pandering designs for female characters.

While Digimon Story: Cyber Sleuth is not going to attract a ton of new fans, it is one of the few traditional turn-based RPGs on the PS4, and it’s a solid one at that. Its low budget and asset reuse hamstrings it a bit, but it’s worth a look even for those that have forgotten the franchise.

By Brian Gunn
Tags: Bandai Namco, Digimon, Digimon Story Cyber Sleuth, Pokemon, Video Game Review
This entry was posted on Saturday, March 12th, 2016 at 8:32 pm and is filed under Brian Gunn, Video Game Reviews. You can follow any responses to this entry through the RSS 2.0 feed. Both comments and pings are currently closed.