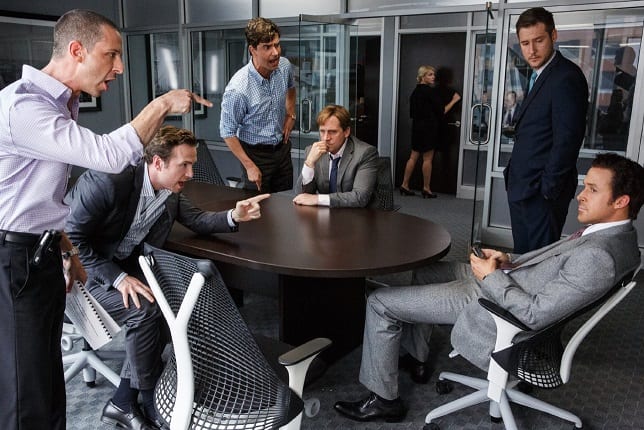 There was some mild skepticism about shorting the housing market.

On the surface, a film based on Michael Lewis’ non-fiction book about the 2007 financial crisis that saw massive amounts of foreclosures and unemployment doesn’t sound all that enjoyable. Add to that mix Adam McKay, whose previous directorial work consisted primarily of the two Anchorman movies, Step Brothers and The Other Guys (all Will Ferrell comedies), and things sound even sketchier.

Instead, The Big Short assembled an All-Star cast and even churned out a Best Picture nominee.

The Big Short basically tells three converging stories, starting with Dr. Michael Burry (Christian Bale), who does the initial research into the housing market and determines it to be unstable. Of course, nobody believes him, and when Burry begins visiting banks to purchase credit default swaps whose value is predicated on the collapse of the housing market, people think he has lost it — and also that they’re being handed free money.

One of the people that gets wind of Burry’s activities is Jared Vennett (Ryan Gosling), a trader that decides to look into the findings and comes out believing the same conclusion. While looking for people to buy into his prediction he mistakenly calls the office of hedge fund manager Mark Baum (Steve Carell). After a presentation from Vennett, Baum decides to get involved as well.

Our third intersecting piece follows the fledgling investment team of Charlie Geller (John Magaro) and Jamie Shipley (Finn Wittrock), which stumbles across a prospectus from Vennett and decides it sounds too good to be true. Since they’re unable to directly get involved because of their small size they call upon retired banker Ben Rickert (Brad Pitt) to get them a proverbial seat at the table.

While the numbers within the housing market continue to bottom out, the bonds maintain their high rating, making the principles sweat it out as to why public grading doesn’t match the condition of what is contained within the bonds. Of course, we all know how it ends.

It has been hard for us not to see Carell as Michael Scott from The Office in previous roles, but he continues to do strong work in dramatic parts. In a lot of ways he serves as the conscious of the film, showing real disgust with what he’s encountering, and he ends up with more screen time than anyone else. Although it’d take too long to list everyone’s contributions to the movie, suffice to say it’s extremely well acted from start to finish.

A lot of credit for The Big Short’s ability to tell what’s really a depressing story about greed that ruined countless lives in a lively and relatively upbeat fashion goes to McKay. Watching how well it’s put together it’s difficult to believe his entire background is in comedy, and not just any comedy, either, but Ferrell’s brand of ridiculous humour. This serves as an eye opener for McKay’s talent, and he’s sure to be given lots of leeway moving forward.

While we’re not always impressed with the Best Picture contenders, The Big Short deserved it, and had it won, we wouldn’t have had an issue. As such, there’s not much to complain about. If there is one thing, though, it’d be the length. It’s not excessively long at a little over two hours, but it does drag a bit in the middle — to the point that we remember pausing at one point and being surprised how much remained. Nothing really stands out as pure filler, but a little tightening wouldn’t have hurt.

There’s better than an hour of extras in The Big Short, which is impressive, but it felt like several of the featurettes covered similar ground whether they talked about casting the film or McKay moving from comedy to a more serious subject. The five deleted scenes serve to fill in a little more back story about Burry, specifically relating to his home life, and while they’re fine there’s nothing in there that feels as though it should’ve been left in.

A great cast and a clever telling of an unpleasant time in American history makes The Big Short both interesting and entertaining, and it’s one of the best films we’ve seen in a while.

By HC Green
Tags: Blu-ray reviews, Brad Pitt, Christian Bale, Ryan Gosling, Steve Carell, The Big Short
This entry was posted on Saturday, March 12th, 2016 at 7:12 pm and is filed under Herija Green, Movie Reviews. You can follow any responses to this entry through the RSS 2.0 feed. Both comments and pings are currently closed.