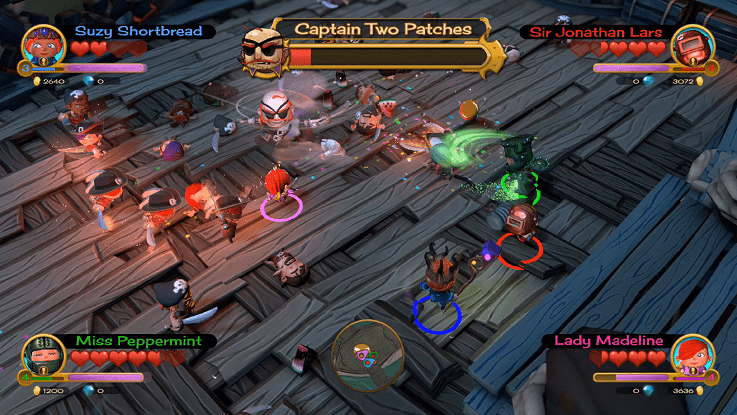 Methinks two patches may be affecting his vision.

Back in our infancy as game reviewers we got to cover Fat Princess, a deceptively strategic multiplayer-focused exclusive for the PlayStation 3. Several years and hundreds of reviews later, the rotund royals have returned with Fat Princess Adventures on PlayStation 4. While there are some similarities in the look and tone, Adventures has more in common with Diablo than its predecessor.

It’s a pretty straightforward setup: you’ve got a basic attack, a “defensive” attack (it can stun foes), you can jump and pick up/throw objects (i.e., bombs, potions). A rudimentary lock-on function rounds out your repertoire. Other buttons are used for checking quest objectives, examining your map and taking a look at your current loadout and available items.

Outside of sluggish movement speed, there’s not a lot to find fault with, though the game certainly could’ve benefited from more options. Most fights consist of mashing the “X” button or holding it down to load up a more powerful attack when the odds start stacking against you. On the plus side, each of the four character classes (warrior, ranger, mage and worker) handle differently, which provides some variety and offers a chance to find the right fit for your style.

In addition to standard combat, you’ll also have access to a pair of amplified attacks. First up is “Fat Mode,” which triggers when you consume a piece of cake at max health, turning you into a giant toddler with powerful melee attacks. The other is “Awesome Sauce” in which your base combatant’s attacks are boosted by activating a meter filled by defeating enemies. Neither is very exciting, but they can help turn the tide when being overrun.

There’s a pleasant, cartoonish look to Fat Princess Adventures with plenty of goofy enemies tottering around the various levels. Your hero is customizable (hair style, eye colour, facial hair, etc.) with some of the more exotic options needing to be unlocked. In stark contrast to this is the amount of blood that will splatter across the battlefield as you defeat your enemies. It makes for a solid mix.

Perhaps we’ll be in the minority on this, but we weren’t fond of the voice acting. Your character’s voice varies based on the personality trait you select for him (hero, Zen, evil genius — pretty sure that’s the guy that plays Kaos in Skylanders), while miscellaneous NPCs deliver their silly dialogue. Clearly it’s all meant to be funny, but it just didn’t click with us. At least the music is decent.

Adventures finds Red and Blue — the two warring factions from the original Fat Princess — having formed a tentative peace and living in the realm of New Bitten (one of dozens of food jokes). That peace is soon shattered by The Bitter Queen, who leads an army of Gobblings to capture Princess Plump and Princess Muffintop as part of a plot to eliminate everything sweet from the world.

It’s a patently ridiculous story that’s played for chuckles with horrible puns a-plenty, though its true purpose is simply to piece together the game’s seven chapters. Action RPGs and hack n’ slash games don’t have the best track record of presenting interesting prose to pair with their gameplay, and Fat Princess Adventures is no exception.

As with games like Diablo, Fat Princess Adventures has you traveling across a sizable world from one checkpoint to the next, leaving dozens of dismembered enemies in your wake. Unlike Diablo, though, there’s little sense of progression, even as you level up and collect/upgrade your loot. Tactics don’t vary much, if at all, and your character isn’t growing appreciably stronger.

Beyond an eventual staleness to combat and dearth of meaningful progression, the game also struggles to adequately explain some of its mechanics. For example, upgrading weapons/armour costs gold, and once you reach a specific threshold it also needs diamonds. How do you earn these diamonds? Well, we got one for finishing the game. Are there more ways? Yes, but the game doesn’t tell you.

It’s the same deal with dozens of locked chests nestled throughout. We kept searching around for a key to unlock them, but it turns out they’re elementally based so you need to actually attack them with the proper element. How’d we figure that out? Message boards. While there’s nothing wrong with a game encouraging exploration, it feels out of place here where so much of it is incredibly straightforward.

Although Adventures can be played (and completed) alone, it’s better in co-op, in which it morphs from a largely repetitive experience to a poor man’s Castle Crashers (which is cool since The Behemoth’s gem is only on Xbox One at this point). You’re going to want to play with friends, though, as, although there is an option to play with strangers, we literally never had it find a game. Not once.

Whether that’s a sign no one is playing is, again, unclear as the lobby area provides no information outside of whether you’re searching for campaign or grindhouse — a mode in which you replay previous levels with random rewards/challenges — and the corresponding difficulty level.

Despite a fairly substantial collection of shortcomings, Fat Princess Adventures can absolutely fill a niche for the right audience — specifically those looking for light-hearted co-op fun. Still, it feels like a step back from the original PvP mayhem.

By HC Green
Tags: Fat Princess Adventures, Video Game Review
This entry was posted on Monday, December 28th, 2015 at 2:01 am and is filed under Herija Green, Video Game Reviews. You can follow any responses to this entry through the RSS 2.0 feed. Both comments and pings are currently closed.