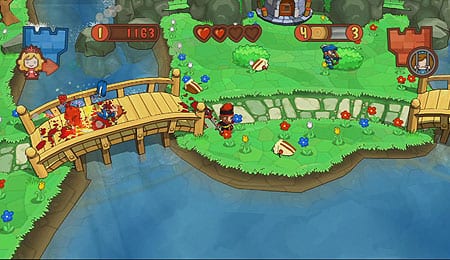 Beneath the adorable graphics lies a game rich in both strategy and bloodshed.

When I was standing in line at my local Walmart at 3 a.m. on Black Friday to purchase a Playstation 3, I had grand visions of all the PS exclusive titles I’d now have access to. Big name games like Uncharted 2 and Metal Gear Solid 4: Guns of the Patriots sustained me during the seemingly endless wait. But lo and behold, it would be a little title called Fat Princess that would serve as my first taste of those wonderful PS3 exclusives. A charming game oozing with humour, Fat Princess is an absolute blast.

Things are very straight forward when it comes to controlling your character in Fat Princess as you’ll only be using one button for the most common tasks. Pressing the square initiates your primary action, which can be things like swinging your sword or chopping down a tree, while keeping it held down unleashes a more powerful version of the move. You lock onto your target by pressing L1.

Beyond that, the X button causes you to jump, circle puts on hats (which change your character to one of five different classes) and triangle toggles between primary and secondary functions once the character classes have been upgraded. For example, an upgraded warrior can switch between his basic load out (sword and shield) and his advanced version (spear), which is more powerful offensively.

Each class has different moves, but they’re all incredibly simple to pull off. In fact, things may be a bit too simplistic as combat is generally little more than mashing the attack button. It would’ve been cool to see some combos, jumping attacks or something to mix things up a bit. It also gets a little tiresome to constantly be holding down the L1 button. Still, the overall scheme is solid.

The artistic style in Fat Princess immediately had me thinking of a combination between Castle Crashers and the cartoon Happy Tree Friends. It’s a fantastic mix of ultra cutesy backgrounds and character models combined with blood spurting violence. The environments are very lush and colourful, and the game allows quite a bit of customization when it comes to your little character — cleverly listed in the options menu under the heading “Get Fabulous.” Skin tone, hair cut, facial hair and more can be altered with additional choices being unlocked as you progress.

There are eight maps total, all of which are lovingly created with unique features such as waterfalls and molten lava, along with a gladiatorial arena where you fight waves of enemies. Gamers can even take it to the pitch for the most violent game of soccer you’ve ever seen. The animations are great, and the bloody eviscerations never get old.

While Fat Princess doesn’t contain a ton of variety of the audio front, it gets a lot of mileage from what’s included. From the basic medieval menu music to Sir Mix-A-Lot belting out “Baby Got Back” during the credits — at which point you get to hack the game’s designers to death — the songs do a strong job of keeping the tone light. The sound effects are solid, and the British narrator is excellent whether reading the fairy tale of the Fat Princess or providing updates during the multiplayer.

On one hand, Fat Princess is amazingly simplistic. On the other, it’s a deceptively deep strategic game that requires a lot of teamwork to be played successfully. The game does feature something of a single-player campaign (hilariously entitled “Play with Yourself”) as you progress through the fairy tale story of the Fat Princess. However, in reality, it’s little more than a glorified tutorial as you’re introduced to the different maps and game types. It’s still worth playing through if for no other reason than to unlock every chapter of the story, but undoubtedly the meat and potatoes (or cake as it were) of this package is found in the online multiplayer.

Fat Princess impressively supports up to 32 players and will fill in for any missing gamers with computer controlled bots. The A.I. won’t embarrass itself, but it’s no match for able human competitors, which makes the uneven distribution between the teams a point of contention. At times you’ll find yourself in a game with say 24 humans and eight bots, but instead of splitting it down the middle one team may have 14 humans and the other has 10. In those instances you can pretty much guess which side is going to come out on top. Also working against the online experience is some occasional slowdown, which while not debilitating, can be frustrating.

The bigger issue is one that must be placed squarely on those playing the game, which is the number of times things devolve into just running around and killing. Sure, it can be fun for a while, but Fat Princess is all about teamwork, and if your team isn’t communicating it’s simply not as enjoyable. On the flip side, if you’re in a game with others that embrace communication and working together this can be one of the best online experiences out there.

Each game consists of two 16-player teams going head to head in one of four match types: Rescue the Princess, Team Deathmatch, Invasion and Capture the Princess. Within that, each player is given five different character classes to choose from. There are offensive classes, support classes and even workers. Each class has a specific job to do and the classes are balanced to the point that each one has value, which is essential as otherwise you’d see 16 warriors running around and no priests.

The five classes also allow for vastly different experiences from one game to the next as you could choose to play as a worker one time, upgrading your facilities and destroying the other team’s, and then go as a ranger the next, unleashing ranged attacks. Switching classes is as easy as putting on a hat, and while there are always hat machines for all five classes in your home castle you can also pick up the hats of fallen allies or foes on the battlefield to switch on the fly.

There’s always a ton going on, making for an enjoyably chaotic experience. Packs of players will make a run at rescuing the princess, only to find your enemy has been feeding her cursed cake and making her double in size. Now she’ll be heavier and therefore it’ll take longer to drag her back across the map, which means you’re going to need a larger escort. So you call out to your teammates and several warriors pile into the catapult, launching themselves to your aid. It’s quite a sight to see when both teams are coordinated and it gives Fat Princess a ton of replay value.

Ultimately, Fat Princess is all about cooperation, meaning to get the most out of this title you’ll need to embrace your fellow gamers and work together to accomplish the missions. Assuming you can do that, this is a great game that has a lot more strategy going on than one might expect.

By Herija Green
This entry was posted on Thursday, December 24th, 2009 at 1:15 pm and is filed under Herija Green, Video Game Reviews. You can follow any responses to this entry through the RSS 2.0 feed. You can leave a response, or trackback from your own site.